The online secondhand retailer has a user following that's strong and growing.

Digital marketplace Poshmark (POSH 1.16%) put up a strong showing on its first day of trading on Thursday. The writing was on the wall, as the company originally planned to offer shares in a range of $35 to $39, but investor enthusiasm regarding the high-end secondhand retailer pushed the range higher on the eve of the IPO. Poshmark's stock was ultimately priced at $42, but even at that higher sticker price, the company appears to have underestimated demand.

Investors were clamoring for shares even before they began trading, driving the opening price to $97.50, 132% higher than the offering price. Shares began trading at about 11:42 a.m. EST on Thursday, climbing out of the gate and never looking back. The stock ended the trading day at $101.50, gaining a spectacular 142% on its first day of trading. 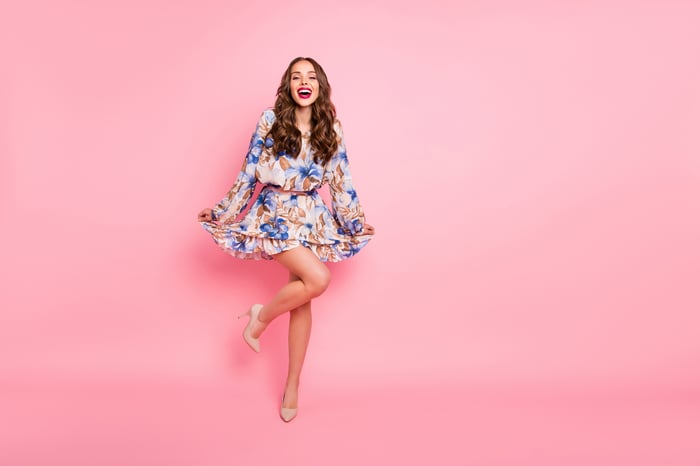 Poshmark's website facilitates the buying and selling of secondhand fashion and luxury items including clothing, shoes, and jewelry. What sets the e-commerce marketplace apart from the competition, however, is the social aspect of the platform. It encourages socialization, helping the online bazaar foster high engagement and increased sales.

The company reported that in 2019, active users spent an impressive 27 minutes per day on its marketplace browsing, shopping, buying, selling, and connecting with other users, resulting in 20.5 billion social interactions.

The company appears to have reached a tipping point this year, however. During the first nine months of 2020, revenue grew 28% year over year to $193 million, and Poshmark was able to turn a profit, with net income of $21 million, compared to a loss of about $34 million during the prior-year period.

Given Poshmark's solid growth and its recent move to profitability, investors should add this secondhand marketplace to their watch list.

1 Recession-Resistant Stock Down 88% That Could Soar

Why Poshmark Is a Stock Worth Watching

Is It Time to Buy the Dip on Poshmark?