Please ensure Javascript is enabled for purposes of website accessibility
Log In Help Join The Motley Fool
Free Article Join Over 1 Million Premium Members And Get More In-Depth Stock Guidance and Research
By Keith Speights - Jan 15, 2021 at 6:08AM

Don't focus on the big drugmaker's past. Look to the future.

Let me get cut to the chase: Yes, I think Pfizer (PFE 3.59%) stock is a buy. And yes, I realize that could be surprising considering that the big drugmaker's shares actually declined slightly last year while the S&P 500 index soared. 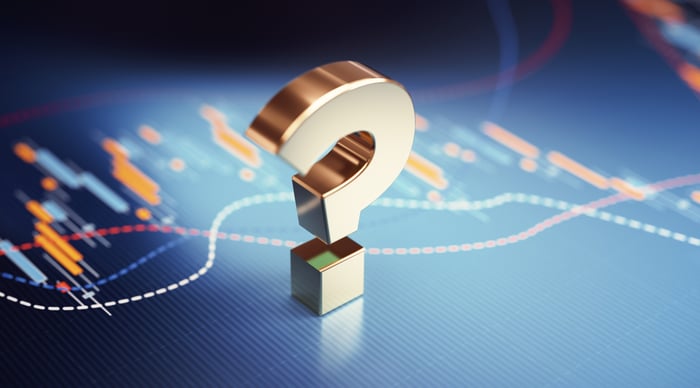 Investors hoping for revenue and earnings growth from Pfizer have come away empty-handed in recent years. It hasn't been a pretty picture. 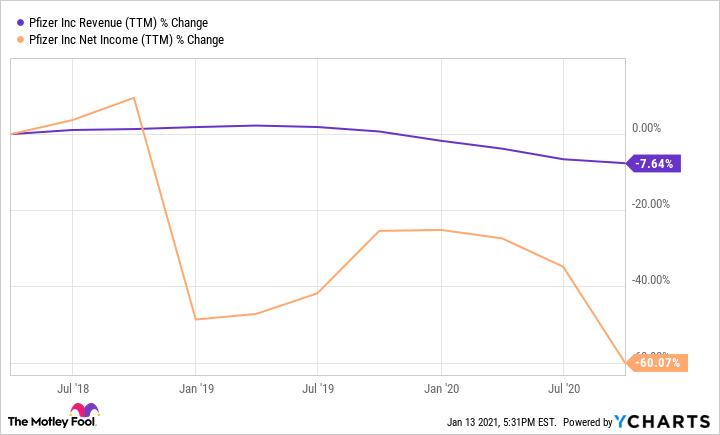 It's important to understand why Pfizer's financial performance has been so dismal. The company's Upjohn unit probably could have been renamed "Downjohn" because of its negative impact.

Upjohn was home to older Pfizer products that lost patent exclusivity. We're talking about former top-selling drugs such as cholesterol drug Lipitor and nerve pain drug Lyrica. The sales declines for these drugs were simply too heavy an anchor for Pfizer to overcome.

Note the use of the past tense in the preceding paragraph. Upjohn isn't an albatross wrapped around Pfizer's neck anymore. In November, the company completed its merger of Upjohn with Mylan to form a new company, Viatris.

Pfizer's product lineup no longer includes Lipitor and Lyrica. It was left with big winners such as blood thinner Eliquis, breast cancer drug Ibrance, and autoimmune disease drug Xeljanz. It also retained a pipeline loaded with strong candidates. With Upjohn in its rearview mirror, Pfizer projects that it will be able to deliver risk-adjusted revenue growth of around 6% and adjusted earnings-per-share growth of close to 10% over the next few years.

Those growth numbers don't include Comirnaty (BNT162b2), the  COVID-19 vaccine marketed by Pfizer and partner BioNTech. The two partners could split sales of $14 billion or more this year from the highly effective vaccine.

Pfizer has provided one main draw for investors during its overall malaise over the past few years -- its juicy dividend. The company remained committed to its dividend program, nearly doubling its dividend over the last decade.

The drugmaker's dividend is still quite juicy. It currently yields 4.2%. Pfizer's dividend yield has slipped below 3.2% only once over the past five years.

Don't dismiss just how big of a difference a solid dividend can make on total returns. Take a look at the impact of Pfizer's dividend over the last 10 years. 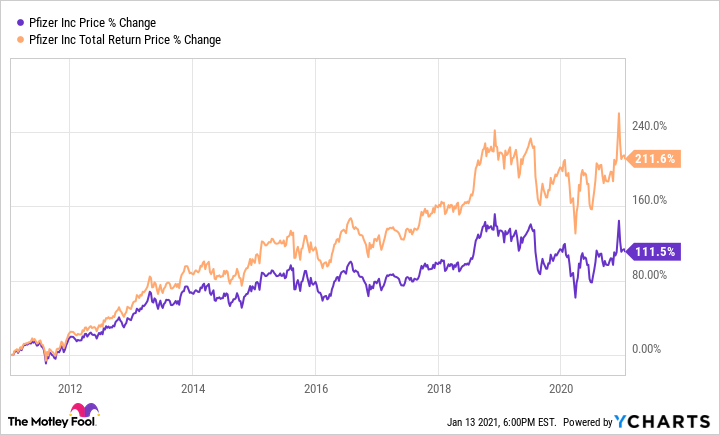 Pfizer's total return was nearly twice as great with dividends included than without. Its dividend will almost certainly boost the total return tremendously over the next decade and beyond, too.

By comparison, the forward earnings multiple for the S&P 500 is currently close to 23. There have been only a couple of times over the last 15 years that the major index's forward price-to-earnings multiple fell as low as Pfizer's current level. One of those was during the financial crisis of 2008.

Pfizer is also cheaper than most healthcare stocks. The forward earnings multiple for S&P healthcare stocks currently stands at 16.5. Even if we limit our focus to major pharmaceutical companies, Pfizer still comes out smelling like a rose. The forward P/E for pharma stocks is a little under 14.

Granted, Pfizer isn't the kind of stock that's going to appeal to every investor. Even with its improved growth outlook, there are plenty of other stocks that will deliver much more robust growth. For that matter, you could find stocks that provide higher dividend yields or that are even bigger bargains. However, on an overall basis Pfizer looks like a solid pick for investors who seek solid growth and a great dividend without paying too high of a premium.