Please ensure Javascript is enabled for purposes of website accessibility
Log In Help Join The Motley Fool
Free Article Join Over 1 Million Premium Members And Get More In-Depth Stock Guidance and Research
By Sushree Mohanty - Jan 15, 2021 at 6:20AM

These two U.S. cannabis stocks rocked 2020 and are geared up for another tremendous year.

While most sectors struggled amid the pandemic, the cannabis sector sparkled. While the crisis forced many people to stay at home, it also heightened anxieties -- which cannabis products have been shown to help treat. The U.S. cannabis industry, in particular, outshone its Canadian counterparts in terms of revenue growth during the year.

Illinois-based Green Thumb Industries' (GTBIF -2.29%) and Massachusetts-based Curaleaf Holdings' (CURLF -1.21%) stock prices soared 151% and 90% in 2020. And I am not surprised at those dramatic movements in the slightest. Both companies saw revenue triple last year and achieved consistent positive earnings before income, taxes, depreciation, and amortization (EBITDA). What's more noticeable is the rate at which both of them expanded amid a global pandemic. Let's explore in detail why these are my two favorite marijuana stocks for 2021. 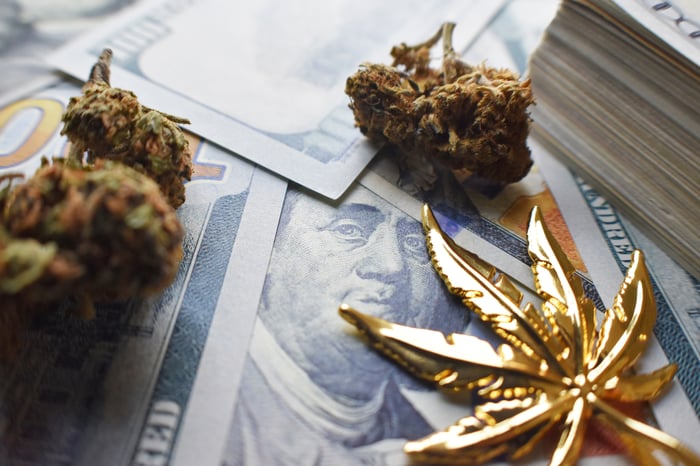 Green Thumb has never-ending growth prospects in the cannabis space

Green Thumb has taught us the value of staying true to your roots. Despite holding 96 retail licenses nationwide, Green Thumb Industries has spent a lot of time and money strengthening its footing in its home state of Illinois. It sells its medical and recreational marijuana products to consumers through its Rise and Essence store chains. Its brands include Dogwalkers, Dr. Solomon's, and Rhythm. Green Thumb operates 48 stores across 10 states in total.

And out of these 48 stores, eight are in Illinois, where it has licenses to open two more stores. After Illinois legalized recreational cannabis on Jan. 1, 2020, the ensuing sales numbers were astonishing. Total cannabis revenue exceeded $1 billion in 2020, according to Marijuana Moment. Recreational cannabis sales alone were $669 million for the year -- a remarkable number for a new cannabis market amid a pandemic.

Establishing business in key markets has boosted Green Thumb's revenue. Its third-quarter revenue showed a remarkable growth of 131% year over year to $157.1 million. The top-line growth also helped its adjusted EBITDA soar 50% from the year-ago period to $53.2 million.

Both revenue growth and consistent EBITDA allowed Green Thumb to generate profits in the third quarter. Its net income of $9.6 million in the quarter was much better than the loss of $14 million in the year-ago period.

At the beginning of 2020, Curaleaf had already made a mark in the U.S., with 54 dispensaries across 17 states. Now, investors are applauding its work in 2020. Curaleaf managed to expand to 96 dispensaries across 23 states this year, while most businesses in nascent industries like cannabis were struggling to stay put. This is the main reason why Curaleaf saw triple-digit revenue growth in all the quarters in 2020.

Considering the rate at which revenue and profits are rising, I have no doubtsthe company could start generating profits this year. Its acquisition of hemp cannabidiol (CBD) oil company Grassroots, in particular, will continue to bring in revenue for the company. Curaleaf completed this acquisition in 2020, which gave it access to 135 operating dispensaries and 1.6 million square feet of cultivation capacity. This will enable the company to meet the growing demand for cannabis in the country.

Curaleaf also has a strong leadership team. Under Joe Lusardi, who took over the role as CEO five years ago, Curaleaf went from being a single-state operator in New Jersey to a multi-state operator covering 23 states. On Jan. 1, Curaleaf's President Joseph Bayern took over the role of CEO. Management has a lot of faith in Bayern, considering his 20 years of leadership experience in marijuana and consumer goods business.

We can also expect Green Thumb Industries to open up new stores, now that more states have legalized marijuana after the November elections. Thirty-five states and the District of Columbia now allow the medical use of cannabis, while 15 states and D.C. allow recreational use of marijuana. 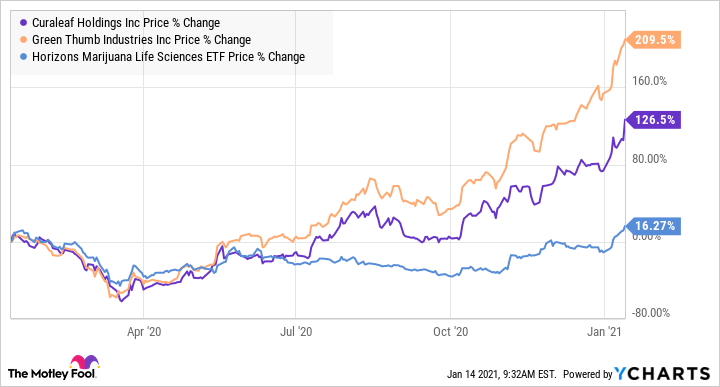 Both pot companies are in excellent positions to dominate the U.S. cannabis industry, especially if the U.S. legalizes marijuana at the federal level. I think that even without federal legalization, continued sky-high revenues will lead to positive earnings, thus boosting the share price -- making these my favorite marijuana stocks for 2021.

For any new, risk-averse investor looking for long-term gains, these two U.S. cannabis stocks pose great opportunities for an entry into the marijuana industry.