Please ensure Javascript is enabled for purposes of website accessibility
Log In Help Join The Motley Fool
Free Article Join Over 1 Million Premium Members And Get More In-Depth Stock Guidance and Research
By David Jagielski - Jan 16, 2021 at 5:38AM

These stocks have been red-hot since the election. Now may be a good time for investors to consider cashing out.

Investors on the fee-free trading platform Robinhood are often willing to take on risk in exchange for the potential to earn some mammoth returns. It's why shares of Hertz Global Holdings skyrocketed last year even as investors learned that the company was in danger of going out of business. Taking the contrarian approach was tempting to some -- after all, if Hertz turned things around, its share price would double, triple, maybe even quadruple in value. But positions like that can destroy your portfolio.

And it's not just ultra-risky stocks that can cause problems. As investors saw last March, a market crash affecting all sectors can devastate -- quickly. Another one could be coming this year, especially with the markets potentially near their peak. The Dow Jones Industrial Average hit another record high this month even as the economy continues to struggle due to the coronavirus pandemic. Three popular Robinhood stocks that could be especially vulnerable in a market crash are Aurora Cannabis (ACB 1.87%), Walt Disney (DIS 2.28%), and Snap (SNAP 4.59%). 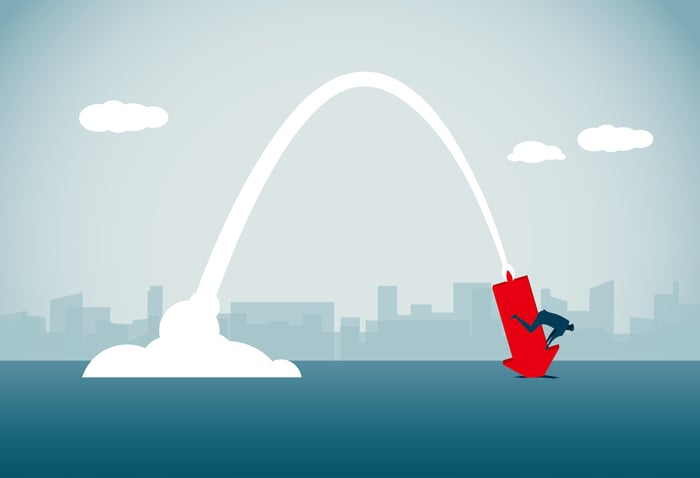 Aurora is a risky investment even on the best of days. It's rallying lately because in November, voters in Arizona, Montana, New Jersey, and South Dakota chose to legalize recreational marijuana. Joe Biden's election win and a Democratic majority in Washington, D.C., also improve the prospects of federal legalization, which would open up the market for the Canadian cannabis producer. So it's no surprise that since November, shares of Aurora have been soaring -- it's up more than 150%, blowing past the S&P 500's 16% returns during that time.

Even though the Canadian cannabis producer may not directly benefit from these recent developments (at least not anytime soon), bullishness in the cannabis industry is contagious and usually benefits most pot stocks. The problem is that Aurora could quickly give those gains back. In February, the company will likely release its earnings results, which could bring its shares back down -- posting underwhelming numbers has been the norm for Aurora.

When the company released its first-quarter earnings on Nov. 9, its net revenue of 67.8 million Canadian dollars for the period ending Sept. 30 was down 1% from the previous quarter. That's not inspiring for a growth stock in one of the hottest sectors in the world. And the further you look down Aurora's income statement, the more troublesome it becomes. Its hefty first-quarter loss of CA$109.5 million was actually tame compared with the previous quarter, in which it incurred a staggering net loss of CA$1.9 billion, with impairment charges, restructuring, and all sorts of nonoperating items crippling its bottom line.

Aurora's stock looks good right now, but with earnings coming up next month and a market crash potentially not far away, even Robinhood investors should consider cashing out before the very probable nosedive takes place.

Disney is also punching above its weight of late. Since November, the stock is up by about 50% to trade near its 52-week high. Sure, the company's streaming service, Disney+, is doing better than expected -- the 73.7 million paid subscribers it's gathered over its first year puts it on track to smash its goal of 60 million to 90 million subscribers by 2024. But for the business to really be in good shape, Disney needs tourists flocking to its parks, and that just isn't happening as COVID-19 cases continue to climb.

The company released its fourth-quarter earnings on Nov. 12. Revenue of $14.7 billion for the period ended Oct. 3 was down 23% year over year, largely because of a 61% decline in sales from parks, experiences, and products. Revenue from that segment totaled $2.6 billion, $4.1 billion less than the prior-year period.

Disney's share price reflects an optimistic outlook that might be more appropriate if the pandemic were under control. Looking at the stock, investors might think all is well with Disney, but that isn't the case.

Snap, on the other hand, is a business that can continue to do well even as consumers stay at home during the pandemic. The company behind social-media juggernaut Snapchat makes it easy for people to stay connected while entertaining themselves and others. However, the stock has doubled in value since November to trade at a 52-week high of about $55. When the markets crash, investors will be looking for safety. A company like Snap, which has incurred losses totaling $1.1 billion over the trailing 12 months, doesn't fall into that category.

When the markets last plunged in March 2020, Snap's stock price fell below $10. And even without another crash, there's the danger that a decline in COVID-19 cases and a return to normalcy could actually hurt the company -- if people start going outside and participating in gatherings again, they may spend less time on their phones. Snap has enjoyed significant growth during the pandemic; in its most recent earnings report, released Oct. 20 for the period ended Sept. 30, sales were up by 52% year over year to $679 million. The previous period's growth rate of 17% was much more modest.

Investors are currently paying quite a premium for the business; Snap's price-to-sales (P/S) ratio of 35 is much higher than the 14 times revenue investors were paying at the end of 2019. This high P/S multiple, the company's lack of profitability, and the questions around its post-pandemic performance are three reasons why Snap's stock could be very vulnerable during a crash.