Please ensure Javascript is enabled for purposes of website accessibility
Log In Help Join The Motley Fool
Free Article Join Over 1 Million Premium Members And Get More In-Depth Stock Guidance and Research
By Bradley Freeman - Jan 19, 2021 at 11:15AM

Why you should approach this streaming giant with caution.

Netflix (NFLX -0.60%) has truly been a historically great stock to own. The entertainment company produced 41,760% returns since it publicly debuted in 2002. Not bad. With the streaming industry set to produce meaningful growth over the long term as cord-cutting continues, is Netflix still a strong play for investors? 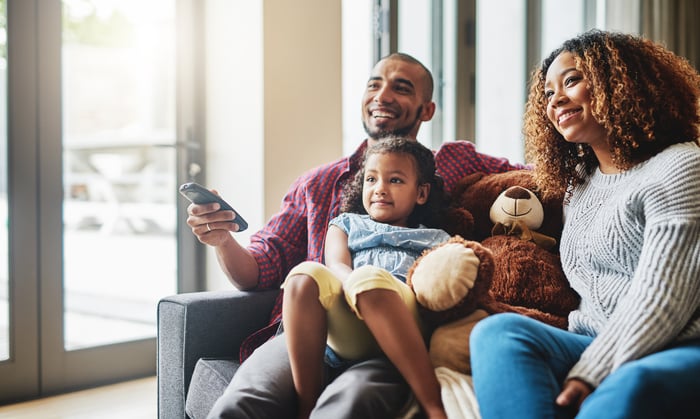 1. Competition is getting stronger

Cable companies have certainly been slow to evolve with the streaming revolution but are finally starting to compete effectively. New products such as AT&T's revamped HBO Max, Comcast's Peacock, and Walt Disney's ESPN+ and Disney+ have all been released to the public in the last 12 months. Disney is expected to pass Netflix in total subscribers by 2024, and the other companies mentioned quickly racked up millions of users. Competition is coming from the free, ad-supported side as well as from a growing number of paid-subscription options to choose from.

Furthermore, two deep-pocketed tech giants -- Apple and Amazon -- are pumping more and more dollars into their own streaming services. Netflix does have first-mover advantage over these behemoths, but both could easily outspend Netflix on content in the future if choosing to do so.

For years, Netflix thrived in a somewhat sparse competitive landscape, but that is no longer the case.

Beyond more scripted streaming competition, many of these competitive entrants will be able to further stand out vs. Netflix thanks to broad access to live sports rights. For example, starting early this year, ViacomCBS plans to relaunch its CBS All Access streaming service under the brand name Paramount+.

Along with adding more scripted content, ViacomCBS has acquired broadcasting rights for the Champions Leagues, the NFL, college basketball, college football, and more. Other examples include Amazon Prime's strengthening relationship with the NFL.

Netflix -- barring any new acquisition or partnership -- has none of this content access. Why does that matter?

In the cable industry, 88% of the most-watched shows are sporting events, and this demand should shift to streaming as entertainment incumbents continue to release new streaming products with sports included. Netflix will have to outcompete with scripted content alone, while other services will be able to win over consumers in more ways.

2. The pandemic is not permanent

The COVID-19 pandemic accelerated streaming adoption across the industry. All players got a boost, including Netflix. Social distancing orders removed a lot of the live entertainment, and brick-and-mortar competition that streamers had to co-exist with in the past.

The company even said so itself after it reported a record 15.8 million adds from January 2020 to March 2020. It has consistently warned shareholders that the pandemic pulled some demand forward.

While there is no concrete ending date to this daunting crisis, vaccines are on the way. Moderna, AstraZeneca, and Pfizer have already begun distributing millions of COVID-19 vaccine doses, and more recently, Johnson & Johnson received encouraging results from its own inoculation trials.

As vaccinations reach a broader scale, life can feasibly start to revert to a more normal reality. Leading infectious disease expert Dr. Anthony Fauci expects this to occur in 2021. When live entertainment and brick-and-mortar alternatives are open once more, subscriber growth could be harder to come by for a streamer like Netflix.

Netflix's road ahead is difficult

Netflix has been the streaming king since cord-cutting began. But its time in the spotlight may be ending. Competition is increasingly abundant, and an eventual end to social distancing will dampen the company's superb 2020 user growth.

For these reasons, I'd say no to Netflix stock today. Netflix reports fourth quarter results after the close today.