Please ensure Javascript is enabled for purposes of website accessibility
Log In Help Join The Motley Fool
Free Article Join Over 1 Million Premium Members And Get More In-Depth Stock Guidance and Research
By Luis Morales - Jan 21, 2021 at 9:06AM

The COVID-19 relief bill that was signed into law in late December 2020 contained a number of additional measures to extend relief to Americans impacted by the pandemic. While the market as a whole reacted positively to pumping additional money into the economy, one sector of the solar energy industry had an additional reason to be optimistic, and renewable energy investors should be paying attention.

The relief bill extended the Investment Tax Credit (ITC) until 2024. The ITC is a big deal: It allows the owner of a solar project to deduct up to 26% the system's cost from their taxes. The ITC is used by residential solar owners and large utilities alike. While many factors like cheaper solar panels have also helped, the solar industry has grown by over 50% since the ITC was originally signed into law back in 2005. But as with many good things in life, the ITC won't last forever -- it was set to expire in 2022. 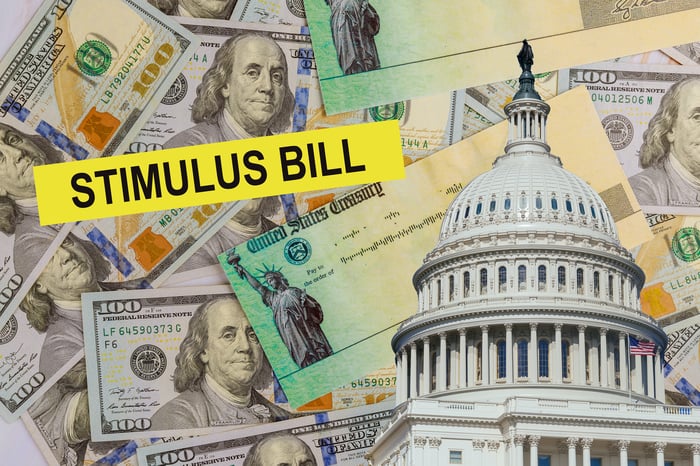 Now, even with a 26% discount, solar systems can represent a large investment for homeowners or businesses. That's why financing a solar system can make a lot of sense.

However, financing solar systems can be tricky. Actually, very tricky. The ITC was originally conceived to benefit owners of solar systems -- and only those owners with a sufficiently large tax bill. This can make it challenging for any one company to own many systems, or to be in the business of financing many systems. In other words: because of how it is structured, the ITC makes mass adoption of solar challenging.

Enter the financial engineers. SunRun (RUN -0.55%) and Sunnova Energy International (NOVA -6.09%) are the leading financiers of residential solar systems in the US. But how have two companies with fairly small tax bills themselves managed to finance tens of thousands of systems? In short, they take money from large, profitable corporations, install residential solar systems, and return these corporations a nice tax break. SunRun and Sunnova get to make some margin on the systems, and get to collect the monthly payments that their customers make. As a whole, this is what is called "tax equity investing", a technique that has become mainstream in the solar industry.

Through tax equity investing, SunRun and Sunnova can lower a corporation's taxes substantially with minimal risk. But because of the complexities involved, only a few companies are deemed competent enough to manage large amounts of tax equity. And, because of these complexities, tax equity investors prefer to make a few, large investments each year. Therefore, the bigger Sunnova and SunRun get, the harder it is for new entrants to compete. So, the extension of the ITC benefits companies like SunRun and Sunnova who are among the few "go-to" companies when it comes to tax-equity investing in the solar industry.

Is complexity a durable advantage for Sunnova and SunRun? There are many voices in the solar industry calling for a simpler federal incentive to deploy solar energy at scale -- including even some of the executives at these companies. Also, when the ITC expires in 2024, solar may be a lot cheaper -- so perhaps simpler financing schemes may become dominant. Will SunRun and Sunnova lose their moat in three years, then?

It's unlikely. At their current growth rates, even without any additional incentives from a Biden administration promising to speed toward renewable energy, both of these companies are likely to be almost twice as large in 2024 as they are today. That means, in the case of Sunnova, more solar installers in its network who are well-trained and comfortable with their products, and in the case of SunRun, a larger national footprint. Also, both of them should see lower equipment costs, lower operating costs, and higher brand recognition. 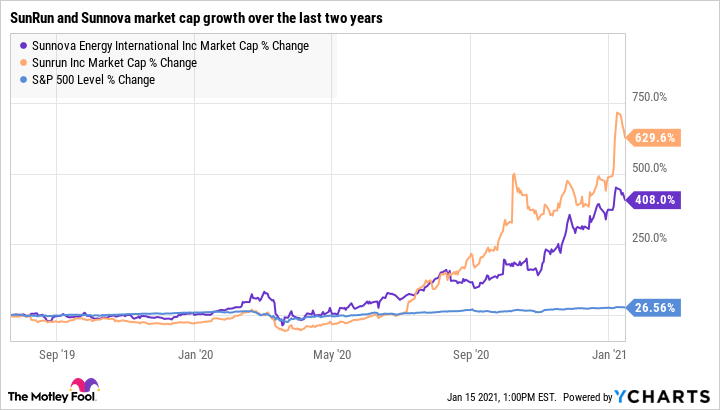 In other words, if these companies just continue doing what they're doing now, they should be worth a lot more in three years than they are today -- and by then, the size of their respective businesses should have built a substantial moat around them that may preserve that value well into the future.

Foolish investors with an appetite for renewable energy and an interest in companies with a competitive edge in the space may look at the surge in these companies' share prices in 2020 as the market signaling more growth ahead.