Please ensure Javascript is enabled for purposes of website accessibility
Log In Help Join The Motley Fool
Free Article Join Over 1 Million Premium Members And Get More In-Depth Stock Guidance and Research
By Harsh Chauhan - Jan 21, 2021 at 7:38AM

The semiconductor industry's tailwinds could send these chipmakers soaring in the new year.

Shares of Skyworks Solutions (SWKS 1.73%) and Applied Materials (AMAT -3.87%) have taken off big time in the past 10 months thanks to a string of terrific quarterly results and a bright outlook for the semiconductor industry.

But investors who have missed the impressive rallies in these hot growth stocks need not be disappointed. Both Skyworks and Applied Materials are expected to turn on the heat in 2021. What's more, it isn't too late to buy these stocks, as their valuation multiples indicate. Let's take a closer look at the reasons why these tech plays are still worth buying. 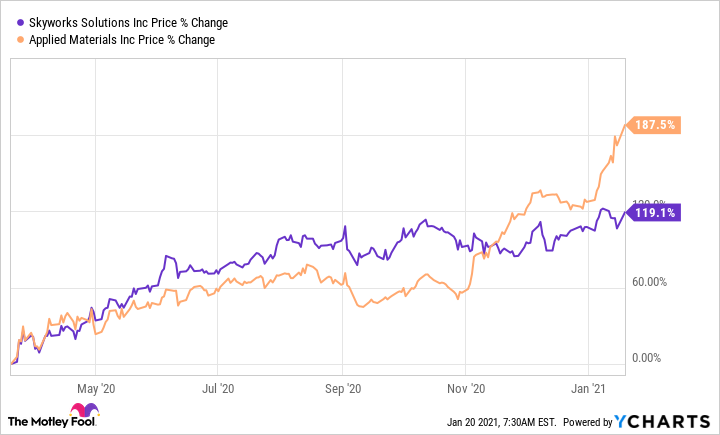 A stronger year is in the cards for Skyworks Solutions

Analysts expect Skyworks Solutions' revenue to jump nearly 18% in fiscal 2021 -- a big improvement over the tepid performance it delivered in fiscal 2020, which ended on Oct. 2, 2020. The chipmaker's top line was slightly lower in fiscal 2020 compared to the prior year thanks to weak smartphone sales, but the new year is going to be entirely different on that front.

The smartphone market's weakness over the past three years has been Skyworks' Achilles' heel, as it depends on this market for a large chunk of revenue. 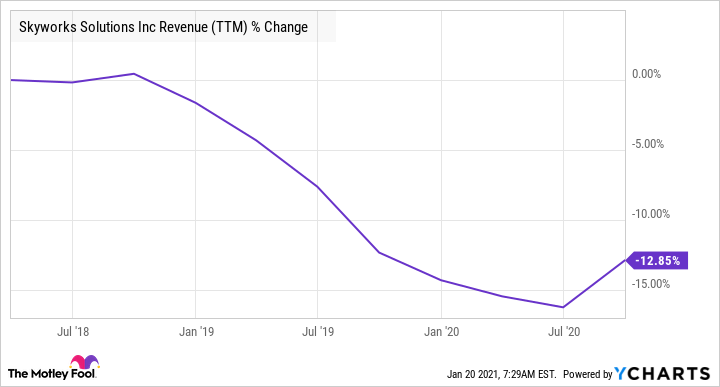 The mobile business produced nearly 70% of Skyworks' total revenue in the fourth quarter of fiscal 2020. So a smartphone recovery in 2021 is great news for Skyworks. More importantly, the chipmaker is well-placed to take advantage of the smartphone recovery, thanks to its relationships with the likes of Apple (AAPL 0.17%), Samsung, Oppo, Xiaomi, and Vivo, among others.

Apple, for instance, is going to be Skyworks' biggest growth driver this year, as the iPhone maker accounted for 56% of the chipmaker's total revenue in fiscal 2020. Demand for Apple's 5G-enabled iPhone 12 line-up seems to be so strong that the Cupertino-based company has been forced to boost production.

According to Japanese financial daily Nikkei, Apple could increase iPhone production by 30% in the first half of 2021 to 96 million units. The report also points out that Apple could end up making as many as 230 million iPhones for the full year -- a jump of over 15% compared to 2020's estimated iPhone shipments of 199 million units.

Skyworks Solutions is one of the best ways to play Apple's iPhone growth because of the close relationship between the two companies. But at the same time, Skyworks is all set to power the 5G devices of other smartphone OEMs (original equipment manufacturers) as well. CEO Liam Griffin had said on the last earnings conference call:

Specifically, in mobile, we accelerated the ramp of our Sky5 portfolio, while supporting leading 5G smartphone launches, including those from Samsung, Oppo, Vivo, Xiaomi, [Alphabet's] Google and other major Tier 1s.

IDC estimates that 5G smartphone shipments in the U.S. could clock a compound annual growth rate (CAGR) of more than 150% through 2024. A similar trend can be expected in other major smartphone markets across the globe, with one third-party estimate predicting a global CAGR of more than 122% through 2027.

This massive expected growth in 5G smartphones makes Skyworks Solutions one of the top 5G stocks that you can buy right now. The stock trades at 33 times trailing earnings, which is almost in line with its 2020 multiple of 32. So it isn't too late to buy the stock, as it is about to step on the gas this year.

Applied Materials' growth has accelerated in recent quarters as demand for the chip-making equipment that it sells has been increasing at a fast clip. The company's revenue jumped 25% year over year in the fourth quarter of fiscal 2020, which ended on Oct. 25, 2020, which was better than the 18% top-line growth it recorded for the full year.

This year Applied Materials could switch into a higher gear thanks to a substantial increase in semiconductor demand. According to a third-party report, the global semiconductor market could increase 12% in 2021 after recording 4% growth in 2020.

According to industry association SEMI, semiconductor manufacturing equipment sales could spike 10.7% in 2021, outpacing 2020's growth of 6%. The good news for Applied Materials is that such growth in semiconductor spending is already being seen on the ground. Taiwan Semiconductor Manufacturing plans capital spending between $25 billion and $28 billion this year, up substantially from $17.2 billion last year. CEO Gary Dickerson had already anticipated such developments on the last earnings conference call:

Investments in IT and communications infrastructure, combined with the accelerated digital transformation of companies and the economy as a whole, are driving very robust semiconductor and wafer fab equipment demand.
In foundry/logic, we see leading-edge customers building out their fabs and aggressively driving advanced R&D. This gives us confidence that current investment levels are sustainable into 2021 and beyond.

More importantly, spending on semiconductor equipment looks set to clock consistent growth in the long run. A third-party estimate projects that the global semiconductor manufacturing equipment market could clock a CAGR of 9% through 2025. The growing application of chips in verticals such as automotive, artificial intelligence, 5G wireless technology, and the Internet of Things (IoT), among others, is going to be a tailwind for this market in the future.

That's why now would be a good time for investors to buy Applied Materials stock, as it hasn't become too expensive yet despite an impressive rally in recent months. The stock has a price-to-earnings (P/E) ratio of 27, while its forward earnings multiple stands at 21.5.

Buying Applied Materials stock at this valuation looks like a no-brainer, as it is expected to clock double-digit percentage revenue growth once again this year and earnings are expected to jump 20% in the ongoing fiscal year. All of this makes Applied Materials an enticing growth stock for investors to buy, as it offers a nice mix of value and growth.

This Semiconductor Stock Could Go Parabolic