Please ensure Javascript is enabled for purposes of website accessibility
Log In Help Join The Motley Fool
Free Article Join Over 1 Million Premium Members And Get More In-Depth Stock Guidance and Research
By Alexander Carchidi - Jan 22, 2021 at 5:55AM

Investors could be in for high times.

Have you been a bit stressed lately? Don't worry, you're not the only one. That's precisely why I think that the conditions are ripe for a marijuana boom this year.

After the election, marijuana is now legal in a majority of U.S. states, and cultural norms are shifting to normalize cannabis consumption. Plus, many people are understandably looking for a little bit of an escape from the usual. So, cannabis companies have the opportunity to flourish unlike ever before, and it's worth taking a look at a couple of the industry's leaders to see whether they might be a good fit for your portfolio. 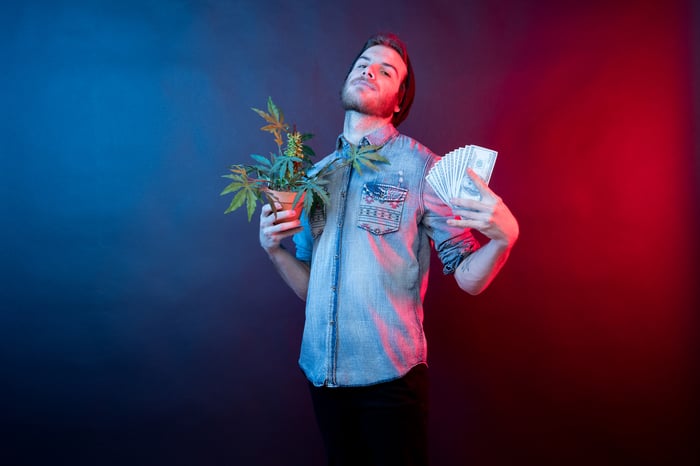 Cresco Labs (CRLBF 1.09%) is one of the biggest cannabis evangelists in the industry, though it's yet to reach consistent profitability. Where other cannabis companies expect their customers to know the drill when they walk in the door, Cresco makes an effort to educate people who are new to the world of marijuana. That effort is bound to pay off in the long term, especially with newly curious consumers in states that recently legalized marijuana consumption.

Cresco has a presence in seven of the 10 most populous cities, and six of the 10 most populous states in the U.S., and derives 59% of its revenue from wholesale. That means the company is well-positioned to serve new customers cheaply without investing more in new retail locations. At the same time, its existing retail locations are making more and more money. From third-quarter 2019 to the same quarter last year, its retail revenue grew with a compound annual growth rate (CAGR) of 38%.

Right now, Cresco has licenses that it can use to open up to 10 new dispensaries in the states where demand for cannabis is expanding at the fastest pace, like in Maryland and Massachusetts. When paired with its collection of cannabis brands that cover the entire range of consumer price preferences and product attributes, it's uniquely positioned to penetrate even deeper into its markets. The company's most recent quarterly revenue grew in excess of 326% year over year, but I wouldn't be surprised if this pace accelerates if its new dispensaries come online over the course of 2021.

Aphria (APHA) is one of the more capable cannabis competitors in Canada, and it's going to have a busy 2021. So far, its low-cost cultivation facilities and in-demand product lineup have won it the top spot in the Canadian adult-use market, and there are signs that its lead will become dominant this year.

Per its most recent earnings report, quarterly net revenue increased by 33% year over year, which is quite good. Importantly, its cannabis cultivation efficiency is also increasing at the same time as revenue. Its cash cost to produce a gram of cannabis decreased by 9% compared to the prior quarter, continuing a downward trend that has held for more than a year. And its cash flow improved by around $70 million, though it still posted a loss of $16.32 million. So, it's entirely possible that Aphria will have positive free cash flow next quarter, which would be a major boon for its stock.

Investors can also look forward to the upcoming merger with Tilray (TLRY), which is expected to close in the second calendar quarter of 2021. When the two merge, they'll become the largest public marijuana company by revenue. They'll also enable Aphria's award-winning cannabis products to be cultivated at a lower cost for the E.U. market, thanks to Tilray's heavy investment in vertically integrated production facilities in Portugal. While there's a risk that the merger will take some time to pay off, management claims that the new entity could have pre-tax annual cost synergies to the tune of $78 million in the two years after the deal closes. The sooner these savings are reflected in earnings reports, the sooner investors could get rewarded again.