The purchase launches the oil giant to the forefront of the e-mobility market.

Oil giant Royal Dutch Shell (RDS.A)(RDS.B) is making a big splash in the electric vehicle (EV) market after announcing it was acquiring the U.K.'s largest EV charging network, ubitricity, for an undisclosed sum.

The purchase will give Shell immediate access to ubitricity's 2,700 charging points in the U.K., which represent over 13% of the entire market, and there are an additional 1,500 charge points in Europe for private fleet customers. The company is also developing a network of public charging stations in France and Germany. 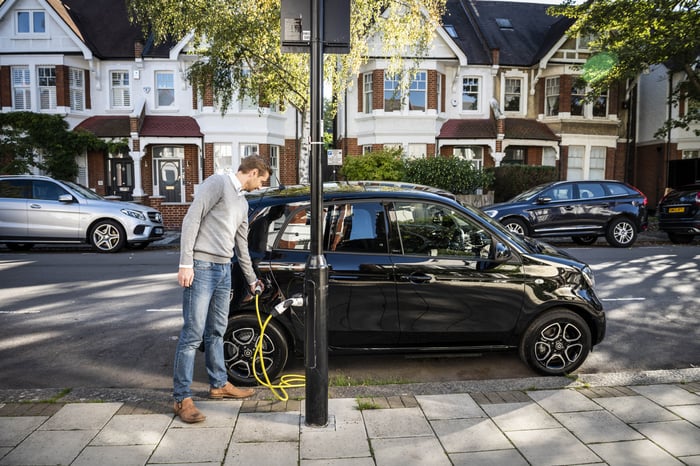 A ubitricity charging point in a streetlight. Image source: ubitricity.

Shell is the largest oil company in Europe, but investors have pressured the energy giant to grow its renewables portfolio. Last year it announced it would invest heavily in low-carbon technology, including renewables, such as wind and solar; new mobility options, such as EV charging and hydrogen, and an interconnected electric power business for homes and businesses.

Once the transaction is completed (which is expected later this year), ubitricity will become a wholly owned subsidiary of Shell.

Ubitricity's unique model is to tap into a city's existing infrastructure to place its charging points, such as streetlights and bollards (short, sturdy posts to create a protective barrier or visual marker to enhance safety).