Shares of Switchback Energy Acquisition (SBE) have jumped today, up by 10% as of 3 p.m. EST, after President Joe Biden announced yesterday that he plans to electrify the entire federal government's vehicle fleet, which consists of approximately 650,000 vehicles. Switchback Energy is the special-purpose acquisition company (SPAC) that is merging with ChargePoint, the largest public charging network in the U.S.

The news has sparked a rally for all electric vehicle (EV) charging stocks, primarily consisting of other SPACs that are in the process of taking other EV charging peers public. 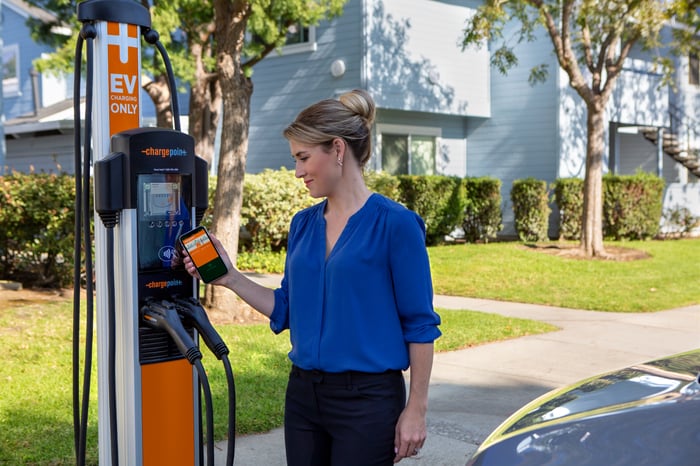 "The federal government also owns an enormous fleet of vehicles, which we're going to replace with clean electric vehicles made right here in America made by American workers," the president said on Monday. On the campaign trail, Biden had expressed support for various clean energy initiatives to combat climate change. He had previously committed to installing 550,000 charging stations across the U.S., as that charging infrastructure would be critical to promote EV adoption.

It's less clear if Biden is referring to purchasing new EVs, converting existing internal combustion engine (ICE) vehicles using commercial electrification solutions, or some combination of both. The president also did not specify a timeline to complete the transition.

Switchback Energy had announced back in September that its target company would be ChargePoint, and the transaction is expected to close next month. The SPAC's shareholders are set to vote on the proposed merger on Feb. 11. Once the deal closes, the stock will change its symbol to "CHPT." ChargePoint is forecasting revenue of $198 million in 2021.