These big jumps had nothing to do with achievements or business quality.

Shares of Finnish telecom equipment specialist Nokia (NOK 2.38%) and Swedish industry peer LM Ericsson (ERIC 2.90%) are soaring on Wednesday, but not because they are doing something right. The stocks gained as much as 86.8% and 27.3%, respectively, because they were swept up in a wave of trading directed by online day-trader communities on platforms such as Reddit and Twitter.

Nokia actually had a bit of real news today. In the early morning hours, the company said it had deployed a 1-terabit 5G network in a trial with Finnish telecom Elisa. That was good for a 14% jump in the morning session.

That tidbit of actual business news was drowned out when the Reddit crowd arrived at 11:30 a.m., EST. The stock surged more than 80% higher in 15 minutes on a massive spike in trading volume.

Ericsson developed a similar spike at almost exactly the same time, along with cancer testing specialist CEL-SCI (CVM -5.43%), which topped out at an intraday gain of 182%. 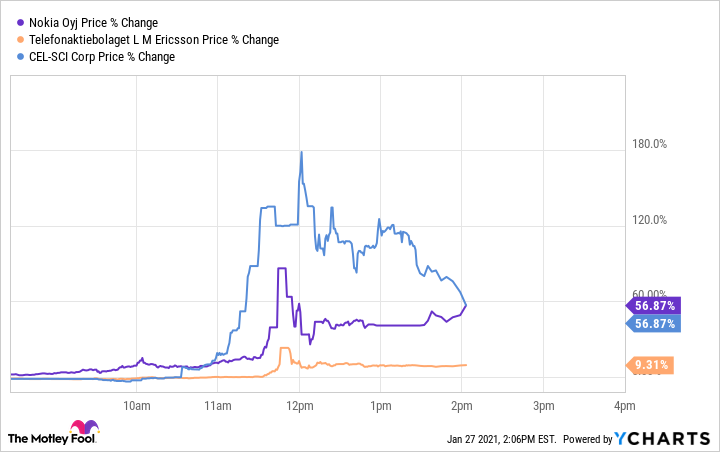 Let me be clear: None of these companies did anything special to earn their huge share price jumps today. It's all a grand experiment in market manipulation, driven by online communities whose main targets are heavily shorted stocks. Large amounts of short-selling can make a ticker more vulnerable to these attacks because the bearish investors are often forced to close out their positions at a huge loss when a so-called margin call comes in.

The short-selling detail does not apply to Ericsson and Nokia, though. Their stocks actually show unusually mild shorting activity where less than 1% of their outstanding shares are sold short. These two stocks make reasonable targets for sudden price manipulation because they are so-called American depositary receipts representing stock that's actually trading on the Helsinki and Stockholm stock exchanges. That extra layer of complication makes fewer shares available for filling orders on the American boards, thus amplifying the effect of quick price changes under heavy trading volumes. 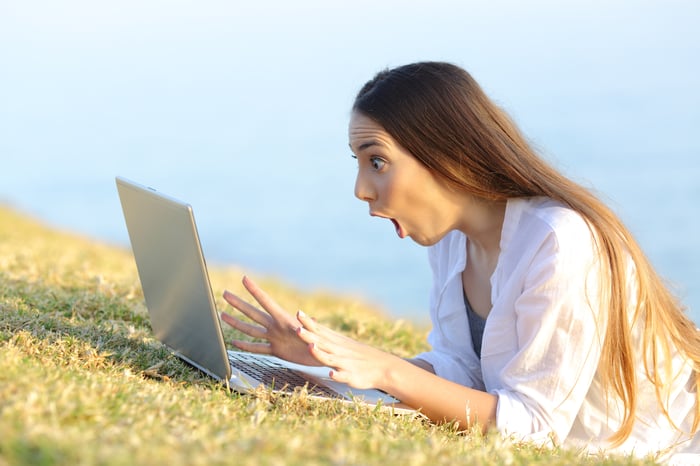 Again, none of this crazy market action has anything to do with long-term investing or the quality of the businesses involved. Nokia would be the first to tell you that, despite the early morning's successful technology test.

"Nokia is not aware of any material, undisclosed corporate developments or material change in its business or affairs that has not been publicly disclosed that would account for the recent increase in the market price or trading volume of its shares," the company wrote in a midday press release.

It would not surprise me to see GameStop and AMC go bankrupt in a year or two unless they make drastic changes to their business models. The COVID-19 health crisis has not been kind to these companies, and they were both struggling even before the pandemic rolled in.

Both Nokia and Ericsson strike me as reasonable investments in the 5G wireless networking space these days, but maybe not at today's skyrocketing prices. Yesterday, Nokia shares were changing hands at just 12 times free cash flows and 1.1 times trailing sales. Ericsson traded at a fairly average 36 times free cash flows and 1.6 times sales. This would not be the best time to start a position in these Scandinavian telecom equipment stocks.

I'm less familiar with CEL-SCI, but fellow Fool.com writer Brian Orelli recently explained that investors were far too quick to embrace the company's progress in developing effective tests for head and neck cancers. This microcap stock belongs at the very bottom of your watch list for further investigation.

The market volatility spilling out from online platforms like r/WallStreetBets will probably continue around these stocks for a while longer and then fade away, allowing the market-moving forces to target a new set of heavily shorted or lightly traded stocks. The price manipulation ideas are not new, but their execution is different this time.

And while this storm rages on, we long-term investors in the Motley Fool school of thought can just sit back and enjoy the spectacle while watching our own portfolios build wealth through more stable returns over long periods of time.