Please ensure Javascript is enabled for purposes of website accessibility
Log In Help Join The Motley Fool
Free Article Join Over 1 Million Premium Members And Get More In-Depth Stock Guidance and Research
By Billy Duberstein - Jan 27, 2021 at 8:33AM

How does a stock defy the law of large numbers?

Many value-oriented investors will point to the law of large numbers when cautioning against investing in high-growth stocks, often scoffing at the prospect that a large company can maintain or accelerate such a growth rate. After all, if a large company runs out of market opportunities, it should slow down as it gets bigger. When that happens, a highly valued stock can experience a vicious drawdown.

However, if a growth stock can maintain its growth rate or even accelerate it, as Microsoft has, that can be a recipe for a millionaire-making stock. And Microsoft today is a prime example of how to find it, since the signs of reacceleration were there all along. 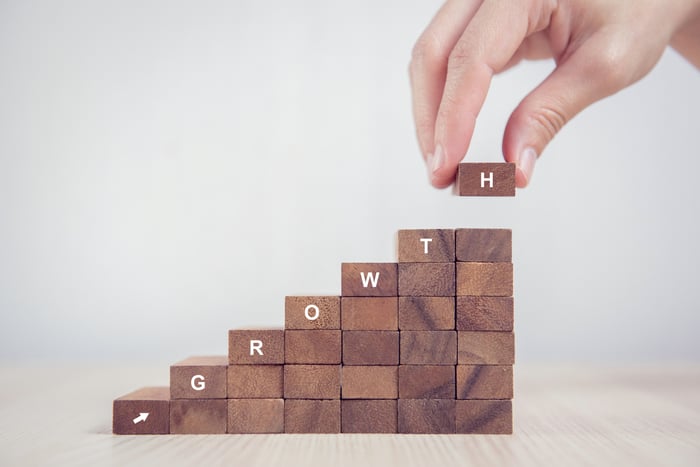 Pay attention to the different segments

When looking at any large company with several different business segments, it's important to analyze each segment underneath the hood, and not just the overall headline figures. Sure, Microsoft was growing a healthy 12%–14% rate for the past few years, but examining its segments over the past couple of years and quarters might have clued you in to the company maintaining, or even accelerating, that rate.

Back in fiscal 2019, about one and half years ago, Microsoft's segment revenue and growth looked like this:

Back then, one might have looked at the 14% growth rate and postulated that Microsoft's growth would inevitably decelerate from there, given its massive size and $125 billion in total revenue. However, if you had analyzed each segment, you would have seen that its smallest segment, the intelligent cloud, was growing much faster than the other two segments.

So even within the intelligent cloud segment, one could assume the high-growth Azure platform was also smaller than the other two parts, but that over time, Azure would make up a larger portion of the intelligent cloud segment. So even if Azure were to decelerate from its lofty 76% rate, its larger size would enable the overall category to maintain or accelerate its growth rate.

The inevitable acceleration has happened

As you can see from the just-reported second fiscal quarter of fiscal 2021, Microsoft's somewhat predictable acceleration happened, as the intelligent cloud became a larger part of the mix:

Nonetheless, we can see that despite Azure decelerating to "only" 50% growth last quarter, down from the 76% in the fiscal fourth quarter of 2019, the intelligent cloud segment accelerated from 21% in fiscal year 2019 to 23% in the recent quarter, just by virtue of the fact that Azure is now a larger part of the Microsoft pie.

That has made the intelligent cloud a larger part of the Microsoft mix, propelling Microsoft's overall growth rate higher.

It's often assumed that a company will inevitably decelerate as it becomes larger. However, as Microsoft has shown, some of the best investments can come from strong companies with more than one product or segment, in which the smaller segment grows at a much higher rate than the older "core" product. Often, the market may only perceive a company's overall top line and then factor that into its valuation.

However, if you can parse out a smaller segment that's growing faster, you might just have stumbled upon a stock that can maintain or even accelerate a high growth rate. And more often than not, a company that reaccelerates revenue and earnings is rewarded quite well indeed.

When looking at the next large-cap company with several segments, keep this important lesson in mind. If you find another example of a rising star segment buried beneath a more well-known and mature core segment, you might just have come upon a millionaire-making growth stock in the making.