Please ensure Javascript is enabled for purposes of website accessibility
Log In Help Join The Motley Fool
Free Article Join Over 1 Million Premium Members And Get More In-Depth Stock Guidance and Research
By Cory Renauer - Jan 28, 2021 at 7:57AM

This biotech stock is jumping, but what should investors expect from its new skincare treatments?

Shares of beaten-down biotech stock Vyne Therapeutics (VYNE 0.15%) jumped more than 30% higher on Jan. 25, 2021, in response to a relatively minor development for its new acne treatments. In a nutshell, the company executed a contract that could boost sales of its recently launched products.

Millions of teenagers and adults eager to prevent spots from erupting on their faces could push sales of Vyne Therapeutics' new treatments through the roof. That said, independent new drug launches rarely progress as quickly as investors expect. 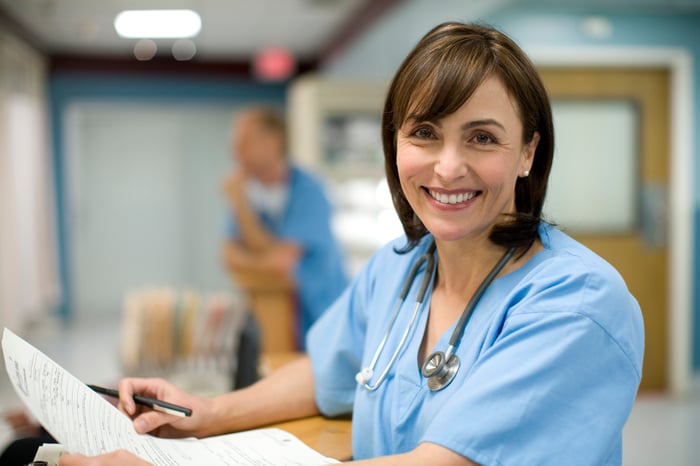 Here's a closer look at Vyne Therapeutics, its new drugs, and its road ahead.

Why everyone's talking about Vyne Therapeutics

Shares of this biotech stock jumped after the company told investors a leading pharmacy benefits manager had executed a contract regarding Vyne Therapeutics' recently approved prescription skin treatments, Amzeeq and Zilxi. These are new topical foam products that contain different concentrations of minocycline, a decades-old antibiotic closely related to tetracycline.

Last January, Vyne Therapeutics launched Amzeeq as a new treatment for acne in patients 9 years of age and older. Good fortune smiled on Vyne Therapeutics again last May when the Food and Drug Administration approved Zilxi for the treatment of rosacea, a recurring skin condition that leaves the face red and flushed.

The prevalence of acne is well documented, but you probably didn't know that rosacea affects more than 16 million Americans. As the first minocycline-based treatment approved to treat rosacea, sales of Zilxi could soar much higher -- and Vyne Therapeutics' stock price along with it.

Biotech stocks generally trade at mid-single-digit multiples of total annual revenue, and there are more than enough people eligible for treatment with the companies newly approved products to drive annual sales in excess of $1 billion. Vyne Therapeutics sports a market cap of just over $413 million at recent prices, meaning there's a lot of room for this stock to run higher.

Before rushing out to buy this stock, investors should know that Vyne Therapeutics has lost a great deal of money for its shareholders in recent years. Vyne Therapeutics is the new name that Menlo Therapeutics adopted after merging with Foamix Pharmaceuticals last year.

You may recall Menlo Therapeutics was developing serlopitant as a potential new treatment for pruritus, or uncontrollable itching. That's really all it was bringing to the deal table. A co-commercialization deal with a larger drugmaker that already has an established team of sales representatives to help launch Amzeeq and Zilxi would have made sense for Foamix. Instead, the company merged with Menlo Therapeutics, a clinical-stage company with one drug candidate that had already failed a mid-stage trial as a treatment for chronic cough.

Since the merger that produced Vyne Therapeutics, serlopitant has failed two phase 3 trials, and their success was a part of the deal. Thanks to a provision in their merger agreement, the portion of Vyne Therapeutics controlled by Foamix shareholders has risen from 59% to 82% of the new company.

Last May, Vyne Therapeutics told investors one of the largest payers in the U.S. had added Amzeeq to its prescription drug formulary, which should make access relatively easy for millions of Americans. Prescription volume during the three months ended September 2020 passed 32,700, which was 52% more than the previous quarter.

Prescription volumes for Amzeeq are moving quickly in the right direction, but they haven't stopped this company from bleeding money yet. Third-quarter Amzeeq sales came in at $3.3 million, which wasn't nearly enough to offset operating expenses that soared to $26.4 million during the three-month period. Vyne Therapeutics hasn't provided any preliminary figures yet that let us know sales have continued growing at a pace that will allow the company to break even soon.

Vyne Therapeutics finished September with about $73 million in cash on its balance sheet after losing $232 million during the first nine months of 2020. Writedowns related to the ill-advised merger with Menlo Therapeutics are responsible for the majority of the company's reported loss last year, but Vyne is still losing money fast enough that we can expect a value-diluting share offering before the end of 2021.

If Vyne Therapeutics can't report impressive sales growth for Amzeeq and Zilxi over the next few quarterly reports, this biotech stock will collapse. It's probably a good idea to wait for more signs of a successful launch before taking a chance with this risky stock.