Please ensure Javascript is enabled for purposes of website accessibility
Log In Help Join The Motley Fool
Free Article Join Over 1 Million Premium Members And Get More In-Depth Stock Guidance and Research
By Rich Duprey – Jan 28, 2021 at 7:15AM

Dining chains were ground down during the pandemic, but only some will emerge stronger.

The restaurant industry was all but crushed by the COVID-19 pandemic after indoor dining was halted and takeout orders and delivery were the only source of revenue.

Being allowed to reopen was a minor salve on the wound as capacity limitations meant restaurant volumes could not recover and dozens of chains went bankrupt. Outdoor seating helped some, but the onset of cold winter weather has severely curtailed that option. 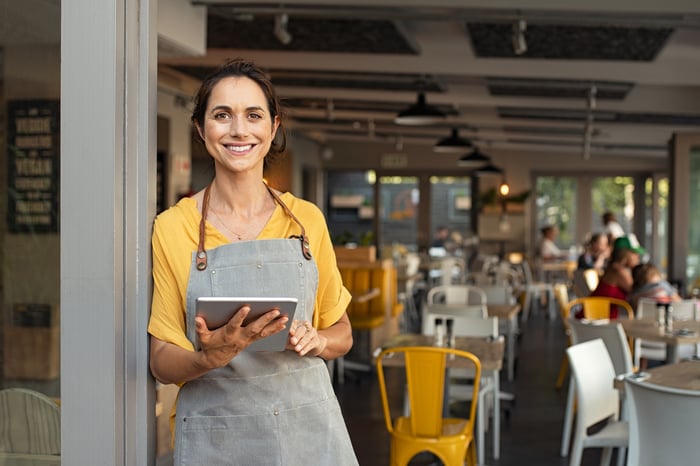 After the horrendous year, Goldman Sachs analyst Jared Garber initiated coverage of the industry with an overall bullish outlook, expecting large chains in particular to benefit from the economy reopening this year and increased consumer spending that should follow.

The "rapid digital transformation and independent restaurant challenges" ought to lift those restaurants higher, but there is still caution as only eight of his 15 picks were rated buys. The rest carried either neutral ratings or were marked as stocks to sell. Below we'll take a closer look at the list of winners and losers and see whether the industry optimism is warranted.

Almost a quarter of Garber's restaurant stocks were rated neutral, mostly because of valuation. The tailwinds he sees pushing the industry higher this year have already been priced into their stocks.

Even though some of the biggest restaurant operators populate Garber's sell list, they also face some of the toughest competitive hurdles while being weighed down by potential anchors.

The Goldman Sachs analyst thinks these battered restaurant chains will hit the ground running in 2021, with their size and strength carrying them higher. Mostly, though, it's their digital investments that will win the day.

One restaurant to rule them all

While the Goldman Sachs analyst was bullish about the restaurant industry in general, and several segments of it in particular, no restaurant caught his eye more than Chipotle Mexican Grill (CMG -0.95%), which he ranked as his "conviction buy," setting a $1,650-per-share price target.

The Mexican-food chain is his top stock idea of 2021 and he writes in his research note to investors that Chipotle is emerging from the COVID-19 pandemic as a digital leader with a strong operational foundation for growth. Having narrowed its menu that was already renowned for healthful eating, Chipotle Mexican Grill's stock of $1,466 per share has at least 10% more upside.

Garber seems to have his finger correctly affixed to most of the restaurant industry's pulse, though I could see Popeyes helping Restaurant Brands International over the roadblocks Tim Hortons might impose, or Taco Bell improving Yum! Brands' chances.

If these chains made it through 2020 mostly intact, then the restaurant industry ought to be able to rise once more in 2021 as consumers decide dining out is an activity they really desire most.