Please ensure Javascript is enabled for purposes of website accessibility
Log In Help Join The Motley Fool
Free Article Join Over 1 Million Premium Members And Get More In-Depth Stock Guidance and Research
By Dan Caplinger - Updated Jan 29, 2021 at 10:07AM

The battle over stocks with heavy short positions continued.

As we've seen for much of the week, though, investors continued to watch huge moves in shares of heavily short-sold stocks. GameStop (GME 0.49%), AMC Entertainment Holdings (AMC -3.74%), and other stocks made big moves on Friday morning, jumping in pre-market trading to recapture some of their lost ground from Thursday. Below, we'll look at the latest moves and the tug of war between individual investors and Wall Street institutions that's lurking behind them. 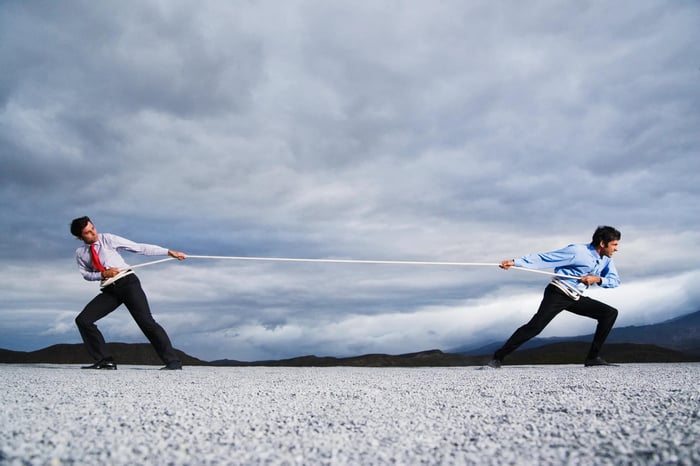 Why GameStop is soaring again

Shares of GameStop were up more than 80% in pre-market trading around 9 a.m. EST. That was enough to make up for all of the stock's 44% plunge on Thursday, and market participants pointed to the potential restoration of trading activity in the stock as a catalyst for the rebound.

On Thursday, many brokers, including the popular Robinhood trading app, chose to suspend the ability of customers to take new positions in GameStop and other highly volatile stocks. That angered brokerage customers and drew the ire of lawmakers in Washington, who expressed uncharacteristically bipartisan outrage at the suspensions. Congress now expects to have hearings about the situation and online brokers more broadly.

In response, Robinhood raised $1 billion in capital and said that it will therefore be able to allow customers to start buying the stock again, at least on a limited basis. But Robinhood customers aren't responsible for the moves in the share price thus far, as Robinhood's extended-hours trading only begins at 9 a.m. EST.

Indeed, the stock had traded as high as $467 per share just as the 4 a.m. EST pre-market session began. It quickly fell back to around the $400 level, and gains moderated further from there. Yet when the opening bell rings and the mass of investors who don't have access to pre-market trading floods into the ring, it's anyone's guess whether GameStop will rise, fall, or stay where it is currently. For its part, GameStop hasn't issued any press releases on its website to discuss what's going on, nor have any filings with the Securities and Exchange Commission addressed the issue directly.

Will AMC sell into its rally again?

Meanwhile, shares of AMC Entertainment Holdings were also up, although not as sharply. Shares were higher by about 50% as of just before 9 a.m. EST, which only clawed back a portion of its 57% drop on Thursday. It had been up as much as 70% earlier in the pre-market session.

One reason AMC's rebound has been smaller is that the movie theater operator might well be looking to take advantage of the higher stock price by raising yet more capital. News reports on CNBC suggested that AMC is looking at selling still more stock, even though it just raised more than $300 million from share sales.

It's only natural for companies like AMC and GameStop to sell stock if they think that its value is attractively high. Moreover, major financial institutions will have an interest in seeing the companies make more shares available for trading, because it helps to ease the short squeeze and return trading to more normal conditions.

This could last for a while

Many investors have seen short squeezes before, and they rarely end well. However, they rarely get as much attention as GameStop and AMC have gotten. Because of the huge amount of controversy the episode has generated, unusual trading conditions for the two stocks could continue for quite a while.