Please ensure Javascript is enabled for purposes of website accessibility
Log In Help Join The Motley Fool
Free Article Join Over 1 Million Premium Members And Get More In-Depth Stock Guidance and Research
By Will Ebiefung - Jan 30, 2021 at 6:09AM

Don't be left holding the bag after this unsustainable rally.

Shares in GameStop (GME 6.81%) have soared over 1,700% year to date amid a massive short squeeze as retail investors pile into the stock. This rally is part of a market-wide push into heavily shorted companies. But investors should think twice before taking a position in this struggling brick-and-mortar video game retailer. GameStop's fundamentals don't support its large valuation, making the stock is a risky bet.

According to The Wall Street Journal, retail investors are coordinating on social media to drive up the prices of heavily shorted stocks to trigger short squeezes -- or a chain reaction of short-sellers attempting to buy back shorted shares to exit their positions, causing the price to soar. 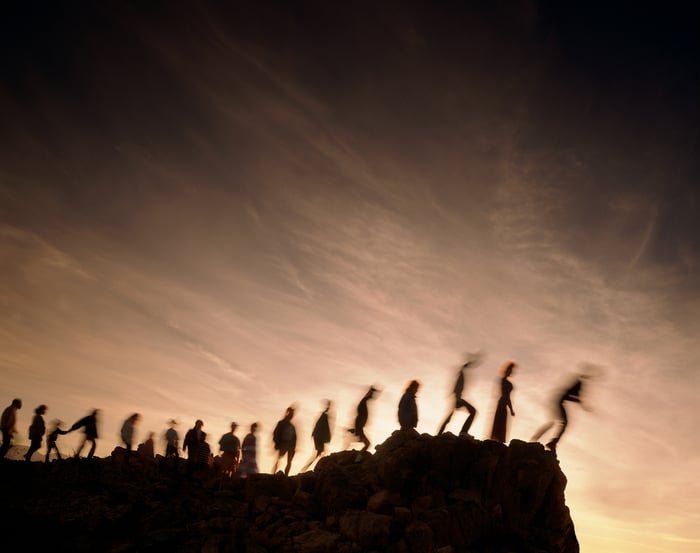 GameStop is one of the most visible examples of this phenomenon right now. Shares are worth $325 as of the time of writing -- up from just $4 this time last year, giving the company a market cap of $22 billion according to the most recent data from Yahoo! Finance (these numbers could change rapidly).

With sales of $5.1 billion over the trailing 12 months, GameStop's price-to-sales multiple (P/S) of 4.1 is significantly higher than the S&P 500's average of 2.8 -- but that only tells part of the story, and doesn't take into account its profit margins and growth rate -- or lack thereof.

2. GameStop's business model may be broken

GameStop's revenue has declined at a compound annual growth rate (CAGR) of roughly 8% from fiscal 2015 to 2019. And the situation didn't improve in 2020 as the coronavirus pandemic continued to batter the retail industry by limiting consumer mobility.

Third-quarter sales fell 30% to $1 billion because of coronavirus-related challenges (such as closed storefronts in Europe) and the transition from generation 8 to generation 9 consoles, which delayed the release of several software titles. Management is also intentionally closing down poorly performing stores -- shutting down 800 locations worldwide since the beginning of 2019 to create a "more profitable footprint."

GameStop is also investing in its e-commerce sales channel -- a rare bright spot -- which grew 257% to represent nearly 25% of total sales in 2020. The rapidly growing online business suggests the company isn't completely hopeless. But so far, the new opportunity hasn't led to sustainable bottom-line improvements.

GameStop's third-quarter operating loss expanded from $46 million to $63 million, and its gross profit margin deteriorated from 31% to 28% in the period. Management has not revealed GameStop's e-commerce margin compared to its brick-and-mortar operations. But it cites higher industrywide freight costs and credit card processing fees as partially responsible for the weakening margins.

How does all this end?

In the best-case scenario, GameStop could use its elevated share price as an opportunity to raise equity. But that won't necessarily benefit current investors who may face dilution. The stock could also face regulatory action from the SEC (which is monitoring the situation) or from exchanges themselves, some of which have recently restricted buying on GameStop and other volatile equities.

Whatever happens, GameStop investors could face massive losses when the music eventually stops because the company's share price seems to be divorced from its fundamentals. Revenue is declining, and the pivot to e-commerce isn't improving its bottom line.