Please ensure Javascript is enabled for purposes of website accessibility
Log In Help Join The Motley Fool
Free Article Join Over 1 Million Premium Members And Get More In-Depth Stock Guidance and Research
By David Butler - Updated Jan 30, 2021 at 8:03AM

It's been a wild week, but GameStop's run is not the way it works.

Many of us like to gamble. It's a pretty big thrill to throw down some cash and get a fast win out of it. This week, we're seeing a lot of gambling.

Shares of GameStop (GME 6.81%) recently climbed over 800% in the span of five days, as retail investors, with help from a passionate group of people on Reddit, pulled off one of the most fascinating short squeezes ever seen. Without getting too complicated, some hedge funds were short GameStop shares, and as retail investors bought it up, the companies were forced to cover their positions, driving the stock even higher. If one ever wanted a textbook example of an artificial bubble, this is it!

The crazy gains this week are surely tempting many to see if they can eke out a few percentage points in the chaos. I admittedly put a few hundred dollars into some of the other stocks seeing wild volatility. Let me reiterate. I said a "few hundred dollars." Like so many, I took a small gamble on the off chance that market reasoning doesn't take hold, and these names manage to rise to the levels that GameStop has so implausibly given us. It's not investing, and a few hundred dollars isn't going to impact my portfolio.

The important thing to note here is this: GameStop's rally is not the way to invest. It's the way to gamble. 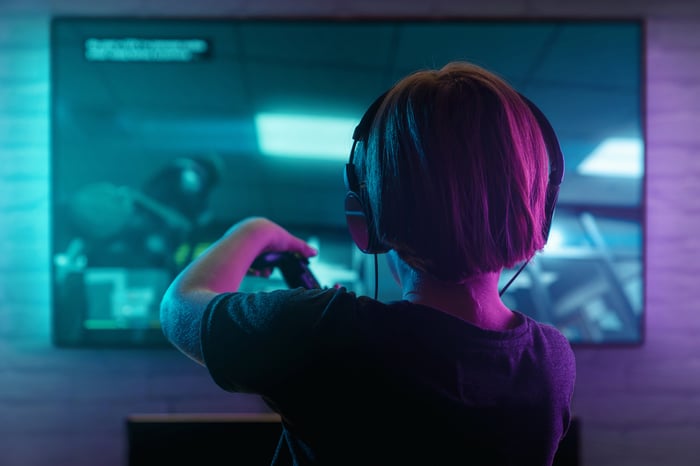 GameStop has been an ailing company for years. Revenue has declined annually since 2016, with substantial losses of $794.8 million and $464.4 million, respectively, over the last two years.

2020 wasn't a healthy year for most businesses, but the stay-at-home trend certainly offered a positive incentive to get people to play video games. The only problem? You can download games online these days. You don't need to go to a store. And with COVID-19, you didn't want to go to a store. Consequently, GameStop sales fell 30.5% through the first three quarters of 2020 to $2.97 billion, with net losses of $4.56 per diluted share. On the plus side, that was an improvement from the $5.19 loss per diluted share for the year prior.

Over the last five years, shareholders have watched their equity fall from $2 billion to $332.4 million at the end of the third quarter ended Oct. 31, 2020. In total irony, GameStop shares had a market capitalization of more than $24 billion at one point this week. Think about that. A company that is worth less than $500 million on paper, and which continues to lose hundreds of millions of dollars, is being valued higher than Domino's Pizza (DPZ 2.90%).

People made big money this week. There's no question about that, but they made it gambling. A short squeeze, seemingly put together by a herd of retail traders, put Wall Street on notice. It's a cool story, but it's not investing. If you own a share of GameStop right now, what do you actually own? An inflated piece of a brick-and-mortar chain, in an industry that is facing continued digitalization. In any other week, would it seem like a good idea?

Far be it for anyone to say "you can't make money this way," but investors must remember that this is not the norm. If you continually buy in to businesses with poor finances, the odds are stacked against you.

If you want to chase these types of bull stories, at least buy in to something showing meaningful growth. Though still a brave call, buying Tesla (TSLA 7.33%) way back in the day made more sense because it was in an industry of potential. Netflix (NFLX 1.98%) was a wild call back in the day, but it was doing something new.

The GameStop rally has basically been based on nothing but touted momentum, and the ire drawn from a hedge fund. There are a lot of lessons to be learned here.

If you insist on making these kinds of trades, do yourself the courtesy of not taking on too much risk. As I said, I tossed a few hundred dollars into the ring on some of the stocks trading with associated volatility. So far, I'm down on all of them! Again, I didn't invest. I gambled.

Investors trying to chase this stuff with serious capital are exposing their portfolios to substantial downside risk. Read about smart investing here.