These trends illuminate why investors place such a premium on ServiceNow's shares.

Would you pay 77 times forward earnings, or 80 times free cash flow for a publicly traded company? In some cases, what may seem like exorbitant multiples are justified by the strength and quality of cash flow and earnings, plus the promise of further growth ahead.

ServiceNow (NOW 0.92%) is one of the largest players in the Software-as-a-Service (SaaS) space, sporting a market capitalization of $106 billion, and annual revenue of $4.5 billion. The company sells digital workflow software that facilitates task automation, with a focus on IT, customer, and employee workflows. Its fourth-quarter and full-year 2020 results, released on Jan. 27, illustrate many of the characteristics that caused investors to push shares up by 95% last year, despite lofty valuation metrics. Below, let's review three key items from the fourth-quarter report that support the long-term investment thesis for ServiceNow. 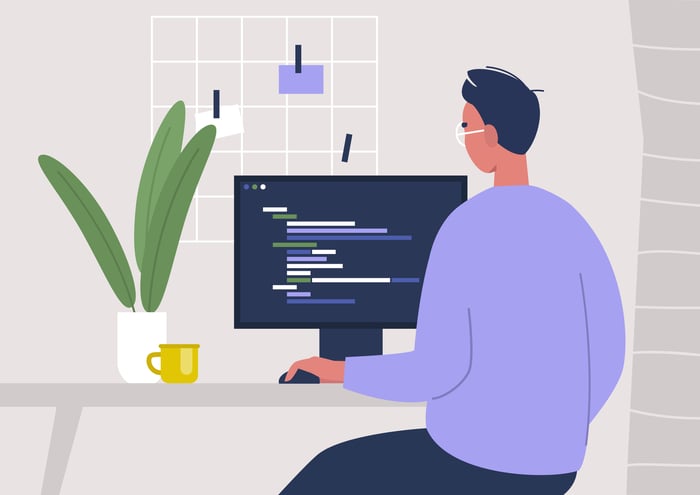 1) A sterling revenue base

ServiceNow's revenue increased by 31% against the fourth quarter of 2019, to $1.26 billion. For the year, the company's top line of $4.5 billion also advanced by 31%. Yet this isn't the most impressive revenue measure in the fourth-quarter report. The company increased its base of customers with annual contract value (ACV) over $1 million by 89 transactions during the last three months -- it now has 1,093 such customers.

ServiceNow is focused on the large company or "enterprise" market. And its long-term relationships with deep-pocketed, global customers underscore the stability of its cash flows. ServiceNow doesn't disclose just how big its largest contracts are, but even if we assume that nearly 1,100 customers generate exactly $1 million in ACV each, that's $1.1 billion worth of annual revenue split among an extremely diversified base.

Why should investors pay close attention to this number? First, it adds credibility to management's assertion that ServiceNow can achieve annual revenue of $10 billion within the next few years. More importantly, however, this gargantuan ACV base supplied by global multinational corporations is an excellent long-term "upsell" opportunity for the company. Expansion within these customers is a natural and relatively easy way to kindle revenue growth for the foreseeable future.

If there's one number that investors often overlook in their quarterly rush to ensure that top-line growth is still solid, it's RPO, or "remaining performance obligation." RPO equals deferred revenue plus contracted amounts that will be invoiced and recognized as revenue in the future. You'll often hear RPO referred to informally as "revenue backlog" or simply "backlog" in the SaaS world; ServiceNow is building quite a backlog of business. RPO leaped to $8.9 billion this quarter, a growth rate of 35% over the fourth quarter of 2019. This number is evenly split between current RPO (the amount of backlog that will be recognized as revenue in the next year) of $4.4 billion, and non-current RPO of $4.5 billion.

This is a massive amount of revenue still to be recognized -- essentially equal to two years' worth of the recorded 2020 top line of $4.5 billion! Again, success in this area stems from the company's determination to plumb the enterprise market. In its earnings conference call, management named a new "multiyear and multi-product strategic deal" with AT&T, an expanded relationship with PayPal, and a new contract with Scotland's National Health Service (to help the country administer COVID-19 vaccinations) as just a few of its large transaction wins in the last quarter. The depth and quality of ServiceNow's backlog makes it easier to see how the company can maintain a brisk double-digit revenue growth rate in the coming quarters.

So far, I've concentrated on evidence of ServiceNow's growth potential as reflected in its pace of revenue expansion, its customer base, and visibility into its future sales recognition. Yet one of the organization's most tangible growth drivers is an expense: research and development.

R&D expense grew by 47% in 2020, outpacing sales and marketing expense, which grew by 21% year over year. In fact, over the last five years, and especially since 2019, ServiceNow has singularly prioritized R&D -- it's one of the fastest-growing items on the company's income statement, rising faster than its direct investment in sales (i.e sales and marketing expense), and exceeding top-line growth: 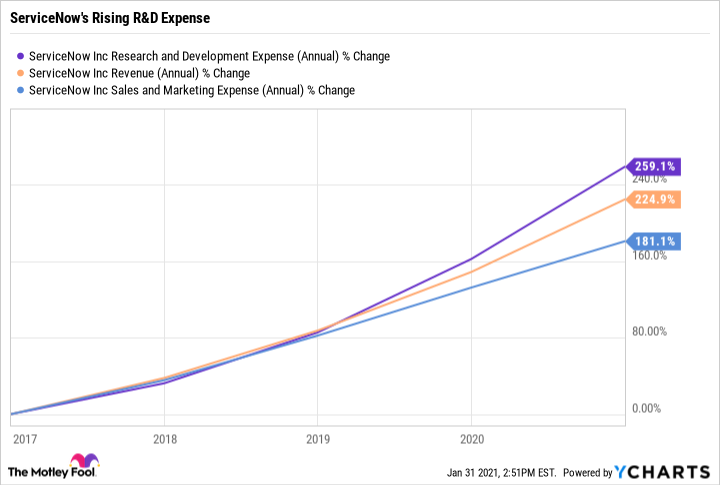 In 2020, the company spent a cool billion dollars, or 22% of revenue, on R&D. Supported by recent acquisitions, ServiceNow is pouring research resources into artificial intelligence (AI)-assisted workflows. Could the SaaS titan have doubled or even tripled last year's operating income of nearly $200 million by easing up on R&D expense? Certainly; and in doing so, ServiceNow's price-t- earnings multiple would seem much less pricey than it does today. But foregoing current profits to keep the organization's growth engine in a high gear is a choice that both management and shareholders appear to have easily aligned on.

Missed Out On Microsoft? My Best Cloud Stock to Buy and Hold