Please ensure Javascript is enabled for purposes of website accessibility
Log In Help Join The Motley Fool
Free Article Join Over 1 Million Premium Members And Get More In-Depth Stock Guidance and Research
By Nicholas Rossolillo - Feb 1, 2021 at 8:08AM

2020 was a record year for IPOs, and this year is set for plenty more hyped technology upstarts to make their public trading debuts. But my top pick among the 2020 IPO class remains my favorite stock in Feb. 2021: Unity Software (U 2.49%).

Unity stock isn't cheap, but if you plan on hopping aboard for the entirety of the current decade and beyond, it's a buy. Here's why I think so.

A note on valuation

Before diving into why I like Unity so much, I'd be remiss if I didn't mention how "expensive" this stock is. Valuing a company is subjective, but most would agree Unity falls into the premium price tag camp. Valued at a market cap of over $40.6 billion as of this writing, shares trade for 46 times trailing 12-month sales and 33 times one-year forward revenue estimates (the company has yet to report fourth-quarter earnings, which are due out on Feb. 4). That implies the average Wall Street analyst expects the company's revenue to continue growing at the same rate it did through the first nine months of 2020. Specifically, management forecasted full-year 2020 revenue to be at least 39% higher than 2019, totaling $754 million.

Also, this cloud-based development platform isn't profitable yet. As of the end of last September, the company reported a sizable cash balance of $1.76 billion and no debt, but free cash flow was negative $23.8 million through the first three-quarters of 2020. Including acquisition expenses, Unity did reach free-cash-flow break-even during the third quarter, but suffice it to say the company needs that large cash balance to support its expansion projects. And investors are clearly anticipating that expansion to continue for some time.

What does this mean for would-be shareholders? Expect this high-growth company stock to be especially volatile since the bar is set so high. Shares have more than doubled since their public debut late last summer, and such performance won't simply repeat itself over and over again. Unity is a small position for me. I usually buy high-growth names like this in batches worth 0.5% or so of my total portfolio value so I can purchase more over time -- for example, after an earnings report. If you're looking at Unity as well, I'd encourage a similar approach rather than betting the farm right out of the gate. 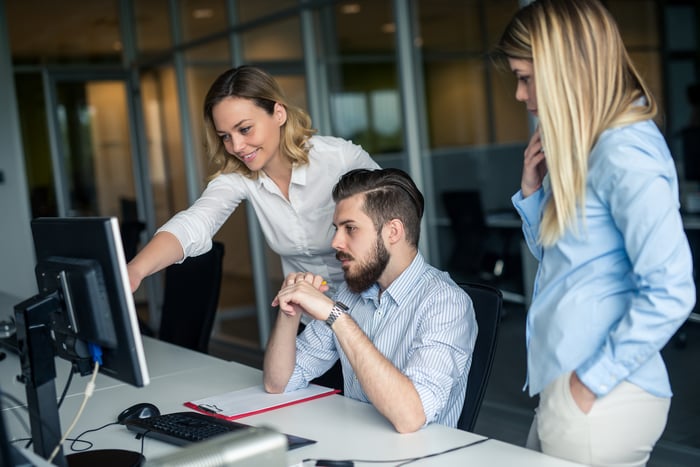 Why the future looks so promising

Now turning back to why I like Unity over the next decade and beyond, the company's roots are in video game development, but it's growing far beyond the confines of the gaming world. It's an internet and cloud infrastructure business, enabling the deployment of developers' work via its content delivery network (CDN). It's also flexing its muscles in the advertising technology department. It partnered with social platform Snap (parent of Snapchat) to help developers find new audiences via ads. Given mobile games are the largest segment of the global video game industry by revenue (and a growing share of entertainment in general), deals like this shouldn't be overlooked for Unity and the more than 2.5 billion end-users of applications made with its platform.

Unity is also finding new outlets well outside the realm of game making. The company recently announced it acquired RestAR, which allows fashion, retail, and marketing designers to capture content in 3D with only a smartphone. As virtual and augmented reality (AR/VR) grow -- for entertainment purposes but also in business use -- Unity is finding new customers that need its software for engineering, graphic design, and the like. Moves like this underscore just how big a software platform this could become, since it's touching seemingly disparate industries from games to movie making to professional services.

And while profitability isn't the primary concern right at the moment, it is significant that Unity is reaching break-even even while it spends heavily to maximize its growth. Eventually, this will be a highly profitable cloud software company. Gross profit margin on services rendered was about 79% through the first nine months of 2020. Flush with cash and growing fast, Unity is currently my top buy among recent IPO stocks. I expect there will be some sizable bumps in the road over time, but my focus is on the very large long-term potential this cloud platform possesses.