Please ensure Javascript is enabled for purposes of website accessibility
Log In Help Join The Motley Fool
Free Article Join Over 1 Million Premium Members And Get More In-Depth Stock Guidance and Research
By John Ballard - Feb 3, 2021 at 11:30AM

There are billions of dollars in advertising spending getting ready to shift to connected TV platforms.

Roku (ROKU -2.76%) exited 2020 with a growing base of 51 million active accounts, as streaming took center stage of at-home entertainment during the pandemic. But Roku has not reached its full stride just yet.

Over the next several years, Roku is in a powerful position to attract more advertising spending on its platform, which could be a huge growth opportunity and is one of three reasons why Roku can sustain its business momentum in 2021 and beyond. 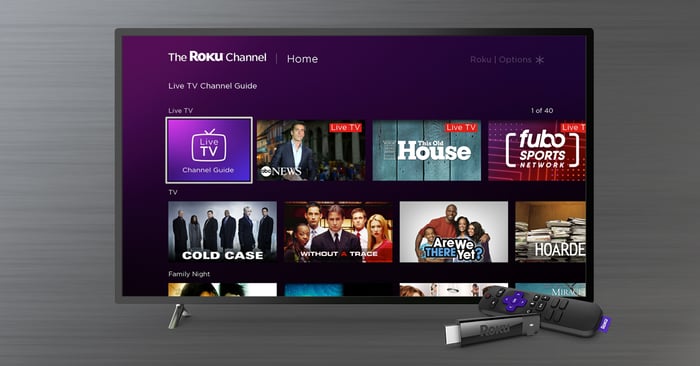 Several streaming services have launched over the last 18 months, with Discovery jumping into the arena recently with its discovery+ service. It's apparent that consumers are signing up for multiple services, which is creating more demand for Roku's connected TV platform. Growth in active accounts accelerated each quarter last year, reaching a 43% year-over-year growth rate in the third quarter.

Moreover, the total hours streamed on Roku reached a new high of 17 billion hours in the fourth quarter. That's nearly double the hours streamed in the third quarter of 2019.

The growth in users and engagement is creating a perfect storm for advertising growth on Roku, which is one of the main ways the company monetizes its users. One estimate puts the U.S. TV advertising opportunity at $70 billion.

It will take time for much of that spending to shift over to connected TV platforms. Previously, eMarketer estimated that advertising spending for connected TV would total $8.1 billion in 2020, but that amount would more than double by 2024.

Still, the shift is already under way. In the third quarter, Roku saw monetized video ad impressions jump 90% year over year, an acceleration over the previous quarter's 50% increase.

Overall, Roku's platform revenue, including advertising, climbed 78% year over year in the third quarter and comprised 70% of total revenue.

Roku is already signing major content deals to attract more ad spending. In December, WarnerMedia's HBO Max, owned by AT&T, launched on the Roku Channel store, which came a week before Wonder Woman 1984 debuted in theaters and on HBO Max on Christmas Day. In addition to making money from ad-supported content, Roku has revenue-sharing agreements in place with third-party subscription services like HBO Max.

Adding more content like this creates a virtuous cycle of more user growth and hours streamed, which is clearly what advertisers want to see before allocating a significant part of their budgets to connected TV platforms.

Most recently, Roku acquired Quibi's global content distribution rights. This deal will make The Roku Channel the exclusive destination of more than 75 premium shows and documentaries. This is huge for Roku's own streaming channel that is attracting millions of users who love the free ad-supported premium content, including news and entertainment.

The Roku Channel is growing so fast that it deserves to be mentioned as a third catalyst for Roku. The channel reached U.S. households with an estimated 61.8 million people last year. More telling is that the active account reach of The Roku Channel doubled year over year in the third quarter, which means it's growing faster than the rest of Roku's platform.

As more content gets added to The Roku Channel, Roku believes engagement will grow. This will not only help Roku attract advertising dollars, but also serve as an important partner for content providers. In the third-quarter earnings report, management noted that A&E credited The Roku Channel for helping it reach a wide audience, which was made possible by Roku's ad monetization capabilities.

As the A&E example illustrates, The Roku Channel is a win-win for content providers and Roku. Because content owners like A&E are gaining value with this partnership, it's only going to lead to more fruitful deals between Roku and other providers over time. That's going to cement Roku as a leading streaming platform, and therefore, a digital advertising freight train.

Investors see the opportunity, which is why the stock is up 233% over the last year, but Roku is just scratching the surface of its potential. Consider that Roku's trailing 12-month revenue is just $1.5 billion. That's very small relative to the estimated $70 billion market for TV advertising. Clearly, Roku has a long runway of growth ahead.

While it's difficult to know where the stock goes in 2021, since it currently trades at a high price-to-sales ratio of 33, investors should watch Roku's platform revenue growth as the year unfolds, as well as average revenue per user. Strong performance in those metrics will tell us how well Roku is monetizing its user base. The more advertising that shifts to Roku, the higher the upside for the stock price over the next decade.