Please ensure Javascript is enabled for purposes of website accessibility
Log In Help Join The Motley Fool
Free Article Join Over 1 Million Premium Members And Get More In-Depth Stock Guidance and Research
By Matthew DiLallo - Feb 3, 2021 at 8:15AM

The oil giant expects its cost-cutting initiatives to pay even bigger dividends in 2021.

ConocoPhillips (COP 2.52%) capped a very turbulent year in the oil market by reporting better-than-expected fourth-quarter results. While the oil producer posted an adjusted loss of roughly $200 million, or $0.19 per share, that was $0.06 per share ahead of analysts' expectations as its cost-cutting initiatives paid dividends. Meanwhile, it generated $1.67 billion of cash flow from operations, which, while down 44% year over year, topped the consensus estimate of $1.39 billion.

Here's a closer look at the quarter and what ConocoPhillips sees ahead for 2021. 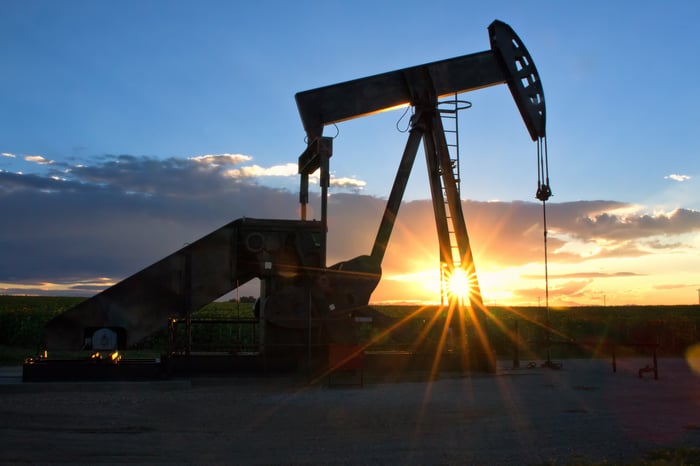 Drilling down into ConocoPhillips fourth-quarter results

However, ConocoPhillips generated nearly $1.7 billion in cash during the quarter despite the lower production and sales prices. That enabled it to fully fund its capital spending ($1.1 billion) and dividend (roughly $500 million) with room to spare. The company also repurchased about $200 million of shares during the period.

ConocoPhillips generated $5.2 billion of cash from operations for the full-year, fully covering its $4.7 billion capital program. The company also sold $1.3 billion in non-core assets. Those factors combined to fully fund its $1.8 billion dividend outlay. Meanwhile, it used some of its cash balance to repurchase $900 million in stock. Even with that outspend, the company ended the year with $6.9 billion of cash and short-term investments.

Last year's biggest highlight was the all-stock deal to acquire Concho Resources, which closed last month. The combined company expects to invest $5.5 billion on capital projects this year. It will spend $5.1 billion to keep its production flat at 1.5 million BOE/D and $400 million on major projects, mainly in Alaska.

Because the company plans to keep capital spending flat, it's on pace to generate significant free cash flow in 2021 and even more in 2022, assuming oil prices cooperate. Driving that view is the improvement in oil prices -- WTI, the main U.S. oil benchmark, recently topped $55 a barrel, its highest level since January of 2020 -- and the company's merger synergies. At $50 WTI, ConocoPhillips can generate $10.5 to $10.8 billion of cash flow from operations, about $3 billion above what it needs to fund its capital program and dividend. Meanwhile, the combined company anticipates it can capture $1 billion in cost savings this year, implying an even bigger cash flow gusher in 2022 if oil prices cooperate.

Given that the oil market doesn't need any new supply in the near-term due to pandemic-related demand destruction, ConocoPhillips will likely return the bulk of this excess cash to shareholders. That suggests it will continue buying back stock. It could also join some of its peers by implementing a variable dividend policy that supplements its base rate with higher special payouts when it has additional excess cash.

Stability amid the storm positions it to prosper in 2021

While lower oil prices affected ConocoPhillips' earnings and cash flow last year, it weathered that turbulence better than most rivals. It was therefore able to take advantage of the situation to buy rival Concho Resources. As a result, it's on track to cash in on higher crude prices this year. If oil continues to cooperate, ConocoPhillips could generate a gusher of excess cash. With a top-notch balance sheet and little need for reinvestment, it will likely return those funds to investors. That could give its stock the fuel to produce strong total returns in 2021 if oil prices cooperate.