Please ensure Javascript is enabled for purposes of website accessibility
Log In Help Join The Motley Fool
Free Article Join Over 1 Million Premium Members And Get More In-Depth Stock Guidance and Research
By Keith Noonan - Feb 3, 2021 at 8:39AM

Despite volatility, the Chinese EV stock is up roughly 115% over the last year.

Shares of Kandi Technologies (KNDI -2.76%) rose 29% in January according to data from S&P Global Market Intelligence. The battery and electric vehicle (EV) company's stock climbed thanks to continued momentum for the broader EV space and signs that the business may deliver results needed to emerge from controversy. 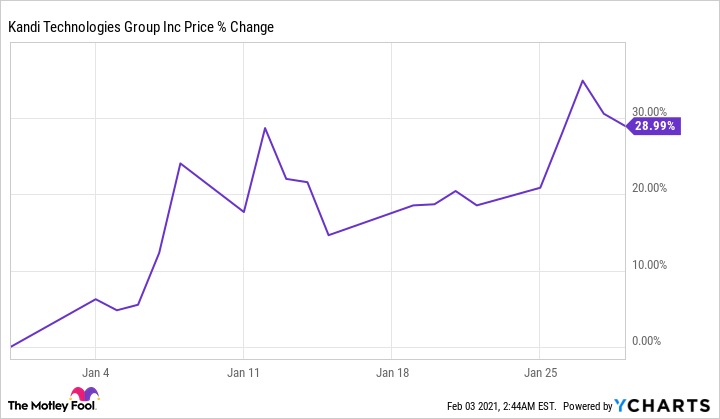 The stock has seen volatile trading over the last few months following a late-November report from Hindenburg Research alleging that Kandi had been misrepresenting its revenue. The EV company released its own report disputing Hindenburg's claims, and shares have subsequently posted significant recovery. 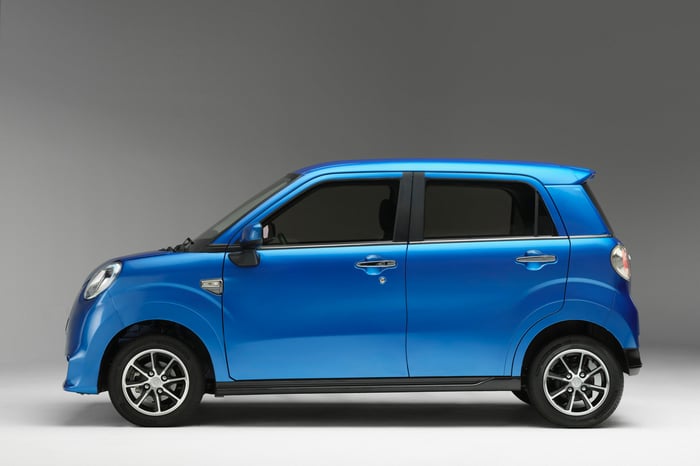 It's still early days in the EV space. The automotive industry has historically been very competitive and will likely continue to be in the future, but a shift to new technologies could pave the way for some relatively small players to gain a foothold, and Kandi's focus on low-cost vehicles potentially gives it a wide addressable market.

Kandi published a press release on Jan. 28 announcing that it had signed a contract to sell 3,000 of its K23 electric vehicles to ridesharing company Zhejiang Ruiheng Technology. Kandi will have opportunities to continue making inroads in the consumer and enterprise EV markets, but the small-cap Chinese automaker is admittedly an underdog, and recent controversies and performance have cast a cloud over its outlook.

Kandi Technologies stock has lost a bit of ground early in February's trading. The company's share price is down roughly 3.7% in the month so far. 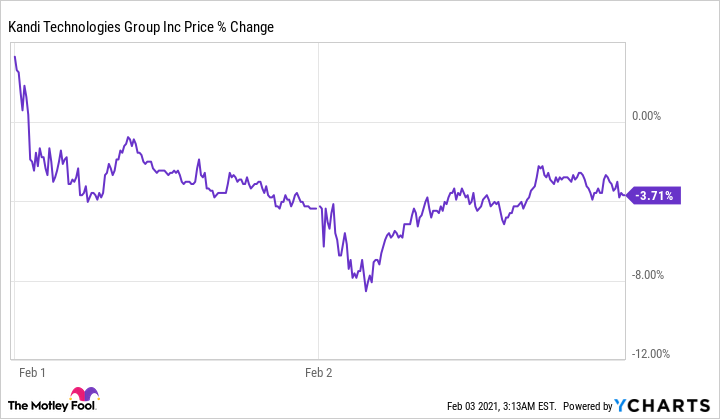 Kandi Technologies has a market capitalization of roughly $620 million and trades at approximately 4.5 times this year's expected sales. The company's business trajectory remains unclear, but its current sales multiples look relatively conservative in the context of the overall EV space. There's a good reason for that. Kandi's revenue dipped 40.9% year over year in the third quarter, as a 67% decline for the company's EV parts segment more than overshadowed a 51.6% increase for the off-road vehicles segment. The company's share price is still down by more than half from the 52-week high it hit in November.

Solid business execution and investor enthusiasm for the overall EV space could help Kandi post big gains. However, the company is facing tough competition, and investors should proceed with the understanding that its stock remains risky.