Please ensure Javascript is enabled for purposes of website accessibility
Log In Help Join The Motley Fool
Free Article Join Over 1 Million Premium Members And Get More In-Depth Stock Guidance and Research
By Keith Speights - Feb 3, 2021 at 6:08AM

More catalysts should be on the way.

Which stock was the biggest winner among COVID-19 vaccine makers in 2020? Pat yourself on the back if your answer was Novavax (NVAX -9.46%). Its shares skyrocketed a whopping 2,700%. This year is off to a roaring start for the biotech stock as well. Novavax's shares are up close to 140%.

Hot stocks can get too hot, though. Some might think that's the case for Novavax. But I don't. Here are three reasons why Novavax stock should soar even higher. 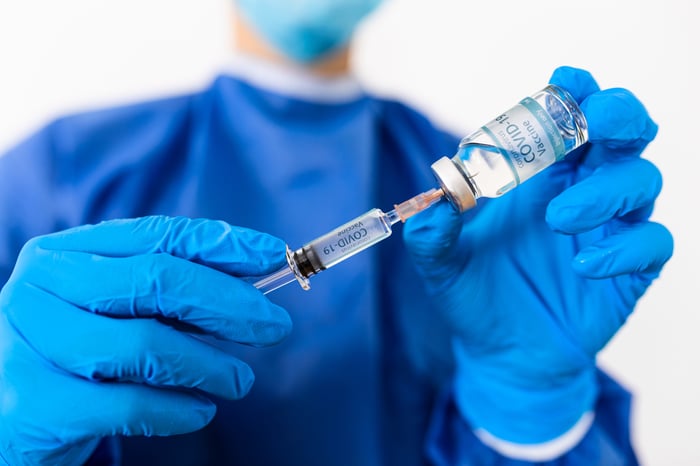 Novavax announced stellar results from its late-stage study of COVID-19 vaccine candidate NVX-CoV2373 last week. The vaccine's overall efficacy of 89.3% was very good. But drilling into the details of the results reveals an even more impressive number: Efficacy against the original COVID-19 strain was 95.6%.

The safety data for NVX-CoV2373 also looked great. Novavax reported that serious adverse events were infrequent and occurred at similar levels between study participants receiving the experimental vaccine and those receiving placebo.

These results bode well for a quick authorization in the U.K, where the late-stage study was conducted. Novavax began a rolling submission to the country's Medicines and Healthcare products Regulatory Agency a few weeks ago. Assuming authorization is obtained, it will clear the way for the company to supply 60 million doses to the U.K. This authorization would also likely provide another catalyst for the biotech stock.

2. U.S. authorization likely on the way

An even bigger catalyst could be on the way, though. Novavax initiated a late-stage study in the U.S. and Mexico in December. Those results should be available within the next few months.

There's no reason to suspect that the results from the U.S. study will be significantly different than those reported from the U.K. study. Novavax expects to complete enrollment in the study by mid-February.

Could the biotech win U.S. emergency use authorization (EUA) even before its U.S. study wraps up? Novavax CEO Stanley Erck hopes so. He recently stated that the company is working with the Food and Drug Administration (FDA) about potentially using the U.K. data to begin the process for filing for EUA in the U.S.

All of the attention right now is appropriately centered on NVX-CoV2373. However, Novavax also has another promising pipeline candidate with experimental flu vaccine NanoFlu.

The company announced positive results last year from a late-stage study that pitted NanoFlu in a head-to-head matchup with Sanofi's market-leading influenza vaccine Fluzone Quadrivalent. The lone hurdle to jump before submitting NanoFlu for FDA approval is to complete a manufacturing lot consistency trial.

Novavax has understandably placed its greatest focus on advancing its COVID-19 vaccine candidate, but NanoFlu's day in the sun could come soon.

Bernstein analyst Ronny Gal projected earlier this year that Novavax could make $3.8 billion in revenue in 2021 from NVX-CoV2373. Of course, that was before the company reported its great results from the U.K. study. Some analysts think that NanoFlu could generate peak annual sales of around $1.7 billion.

Even after the stock's ginormous gains, Novavax's market cap is still around $17 billion. That leaves room for its shares to run with the combined revenue potential for the company's COVID-19 and flu vaccines over the next several years. Don't look for a repeat performance of 2020 or even another run like we've seen so far this year. However, I think that Novavax should soar even more over the next few months.