Investors may be looking to get back into this once-hot name after shares have retreated recently.

Shares in electric-vehicle (EV) battery maker QuantumScape (QS 7.61%) jumped more than 14% Wednesday, before settling back to a 10% gain as of 2:45 p.m. EST. The rise in the stock marks a reversal of an extended downturn since the start of the year.

After QuantumScape began trading publicly last November, investors drove shares up more than 400%, giving the company a market capitalization of about $45 billion. The company believes it has found a solution for solid-state battery commercialization, but it still doesn't expect to begin production until 2024.

The technology is one that could revolutionize the EV sector, and after shares have dropped more than 50% to start 2021, investors are buying back in today. 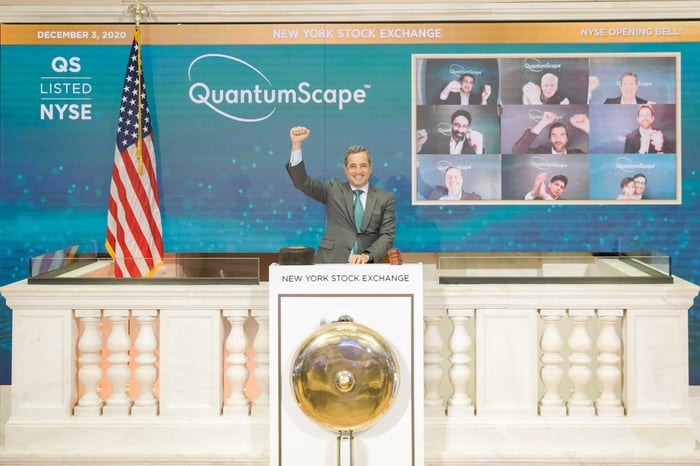 QuantumScape believes it has found a ceramic material that can be used as a solid-state separator in a battery cell that should prevent the formation and growth of damaging lithium dendrites. Those dendrites can lead to heat buildup and fires, and are the reason that current battery technologies require slow charging times and have performance limitations.

The company is backed by Volkswagen, giving it a major customer at the ready once commercialization begins. Successful development would result in a faster-charging battery that could provide longer range with better performance and a longer life cycle than current lithium-ion batteries.

That potential isn't lost on investors, and the recent drop in share price seems to have given some a window to take a position. But even at the current $17 billion valuation, there may be much volatility between now and when the company aims to begin production.