Investors are betting this underdog will succeed where even the most reputable of biotech firms have failed.

If you had invested $10,000 in shares of mid-cap biotech Cassava Sciences (SAVA 3.58%) at the beginning of the year, your position would have grown to a stunning $99,650 as of Feb. 3. With the stock achieving 10-bagger status in a little over a month, many investors wonder if the stock can still make them rich if they buy now.

Alzheimer's affects 5 million Americans, and no new therapies have been approved for decades. I believe that Cassava can change that. The company still only has a market cap of $2.66 billion after its recent run-up, despite having the potential blockbuster drug, simufilam, in its pipeline. Just what are the odds of its success? 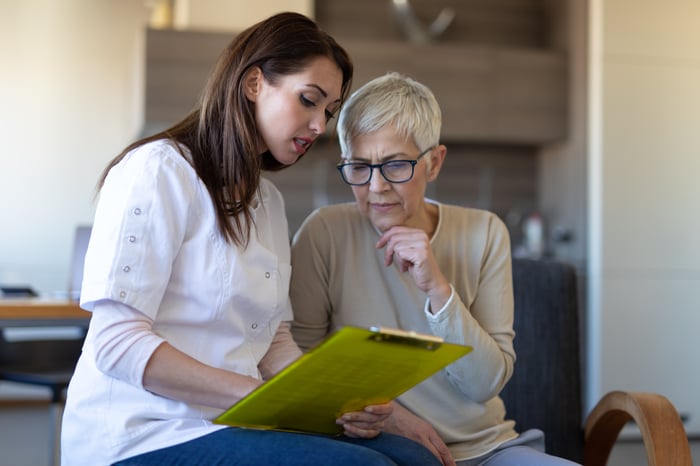 Do the results look good?

An interim data release of an open-label investigation revealed 50 patients with Alzheimer's disease saw a 10% improvement in their cognitive functions six months after treatment with simufilam. Additionally, the same participants saw a 29% improvement in neuropsychiatric metrics such as anxiety, delusions, and agitation after dosage. The National Institutes of Health (NIH) funded the study.

These results are consistent with another phase 2b study, where patients treated with simufilam saw a modest decrease in the activities of key biomarkers that are theorized to cause Alzheimer's. That data set showed simufilam was superior to placebo on a statistically significant basis. The drug was also well tolerated with no treatment-related serious adverse events.

Do not be dismayed by the small improvement. Currently, there is no cure for Alzheimer's disease, let alone a drug that could slow its progression. No new advancements targeting the disease have come about in over 30 years. Any scientifically validated improvement at this point could lay out an easy path to regulatory approval.

What's with the skepticism?

Despite having many enthusiasts, Cassava also has its own dedicated base of critics. In fact, nearly 20% of the company's shares are shorted.

The bearish argument for Cassava is quite a long walk, but has some merit. The mechanism of action (MOA) for simufilam relies on the drug targeting amyloid-beta and tau proteins found in brain tissue. Researchers theorize the two proteins accumulate and form plaques that tangle in the brain, causing the degeneration of cognitive functions.

It is vital to know that this beta-amyloid interaction is a theory, not a widely-accepted medical fact. Over the last 20 years or so, biotech giants such as Pfizer (PFE -1.04%), Eli Lilly (LLY -1.70%), and Merck (MRK -1.39%) have all designed drug candidates that target Alzheimer's disease based on the beta-amyloid hypothesis. All of them have failed, regardless of the dosage of the drug or the stage of the disease.

Recently, Biogen (BIIB -0.63%) became another casualty in the beta-amyloid battle, after a panel of experts at the U.S. Food and Drug Administration (FDA) overwhelmingly voted that its experimental drug, aducanumab, did not establish efficacy in a pivotal phase 3 clinical study. Given the beta-amyloid theory's abysmal track record, shorts allege that simufilam will hit a dead end as well.

Should I buy the stock?

Cassava is undoubtedly facing an uphill battle. However, just because the odds are stacked against the company does not mean it cannot achieve victory. So far, its ability to verify the efficacy of simufilam against a placebo before late-stage studies is what sets it apart from other failed candidates.

If you believe in Cassava and are willing to wager that the company's science can hold up in phase 3, then go for a position. Keep in mind, however, that clinical trials for Alzheimer's disease cost an average of $1.8 billion and usually take more than four years to finish. Right now, the company only has $94.3 million in cash, so it probably needs to find a development partner to split the bill or sell more stock to raise funds.

It will be an excruciating wait holding onto a volatile stock for a few years hoping for good results. For those investing without the necessary high risk, high reward mindset, check out these safer options instead.