Please ensure Javascript is enabled for purposes of website accessibility
Log In Help Join The Motley Fool
Free Article Join Over 1 Million Premium Members And Get More In-Depth Stock Guidance and Research
By David Butler - Feb 4, 2021 at 9:20AM

Shares of AMC Entertainment soared last week. Did it help the company?

Who would have thought that a platform like Reddit would drive the attention of the entire investing world toward just a handful of stocks? Everyone has heard about the GameStop short squeeze at this point. You don't even have to be in the stock market; it's been the news of the month. And AMC Entertainment Holdings (AMC -10.28%) shares have been getting just as much buzz. The movie theater chain was on its death bed because of the COVID-19 pandemic, economic shutdowns, and social distancing, before successfully procuring capital to carry it through.

With retail investors going on a buying frenzy, AMC shares were up over 800% at one point in the last month. Even after a marked correction, AMC shares are still up around 300% for the year. These are huge stock returns. But past the Reddit mania, does AMC have a chance? Does the movie theater chain have what it needs to survive?

AMC got one big gift from the trading frenzy: It was able to raise more capital. On Jan. 27, AMC announced it had sold $304.8 million of stock. Here's the cruel irony: The bulk of the stock's rally took place after it raised capital. Imagine the financial position that AMC could be sitting in if it had sold stock a few days later at $17 per share, rather than at $4.81 per share. It was the difference between raising $304.8 million and $772.45 million. 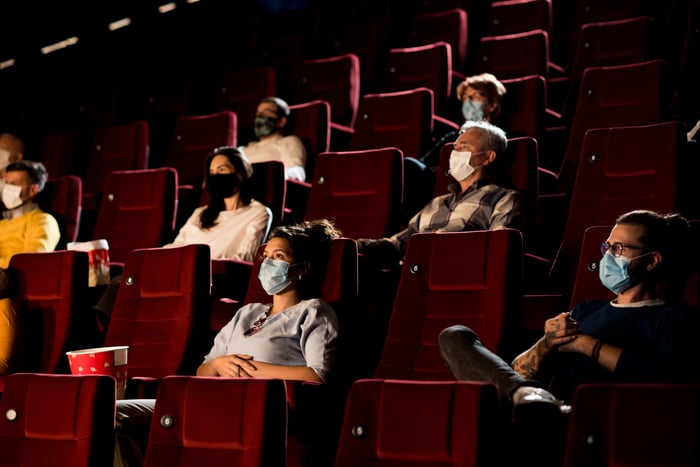 In all, AMC has reported that through debt financing and equity, it has raised $917 million since December, protecting it from bankruptcy.

Considering the theater chain lost $3.6 billion through the first three quarters of 2020, that cash is most certainly a relief for many within management. In the press release announcing the capital that had been raised, AMC said its financial runway had been extended "deep into 2021." That's still a cause for concern.

The company has to negotiate with landlords on lease payments, deal with film industry trends, and has taken on a fair deal of debt. With COVID-19 still not under control, AMC is not going to magically shift back to what it was. Fourth-quarter earnings are expected at the end of February, with estimates calling for an adjusted loss of $4.06 per share. Full-year 2021 earnings are expected to be a loss of $5.18 per share.

The company's financial situation was not stellar prior to the COVID-19 pandemic. AMC Entertainment lost $310.67 million in the five years leading up to 2020. Since 2018, AMC's annual sales growth has fizzled, eventually leading to the obvious declines of last year.

Part of the battle here is the rising threat of streaming. Companies like Netflix began a trend that major entertainment players like Walt Disney have emulated. 2020 was a year that gave the streaming trend a jump-start. Social distancing drove consumers to the couch, making them watch their shows and movies at home. Netflix reported big gains in subscribers in 2020, while Disney's Disney+ and Hulu services saw increases as well.

AT&T went so far as to release some of its Warner Bros. films directly to HBO Max at the same time they opened at the box office. It will be doing this hybrid model for all of its releases in 2021. This threatens consumer demand for theatres, at a time when they're going to need it the most. AMC's CEO Adam Aaron has been very vocal on the issue, and pointed out that it would also put a damper on studio profits.

He's not wrong. For larger films, like the upcoming James Bond flick from MGM Studios, No Time to Die, it's tough to replace those box office returns on investment.

With losses expected to continue through 2021, AMC is in a fight against cash burn. Without a surprise to the upside in terms of attendance, or further cuts in spending, the company will almost certainly need to procure more cash down the road.

Stock price volatility doesn't usually do much for the underlying economic forces facing a company. Just as with GameStop, the circumstances of AMC's industry have not changed. The euphoria seems to be dwindling in terms of the recent stock rally. Shares are down around 30% this week.

What the Reddit rally did is help AMC issue some shares at higher prices. It arguably helped private equity firm, Silver Lake, more than anyone. A major investor in AMC Entertainment, Silver Lake was able to sell out its position in AMC, by converting its $600 million in convertible notes -- effectively extinguishing that debt for AMC -- into stock, and then selling it off for $713 million. Not a bad pay day. Without that rally, AMC's stock would not have been high enough to convert the debt into shares.

From that point of view, the stock rally saved AMC from some debt, and provided a poorly timed capital infusion from issuance of shares. If anything can be said of the Reddit rally's impact on AMC Entertainment, it helped buy the company some more time. It did not change the broader problems, facing the worlds largest theatre chain.