Please ensure Javascript is enabled for purposes of website accessibility
Log In Help Join The Motley Fool
Free Article Join Over 1 Million Premium Members And Get More In-Depth Stock Guidance and Research
By Rich Duprey - Feb 4, 2021 at 8:35AM

The toy maker's comeback was almost derailed by the pandemic.

Mattel (MAT 4.40%) was hurt by the COVID-19 pandemic every bit as much as rival Hasbro with both stocks losing over 50% of their value during the sell-off last March. However, from their respective low points, the former has gained about 150% as of this writing, while the latter is up 115%.

There are some good arguments to be made that Hasbro could be the superior toy stock, and not just because it arguably has more room to run than Mattel. But that doesn't mean Mattel isn't a buy in its own right.

Let's take a look at why an investor just might want to buy shares of Mattel in 2021. 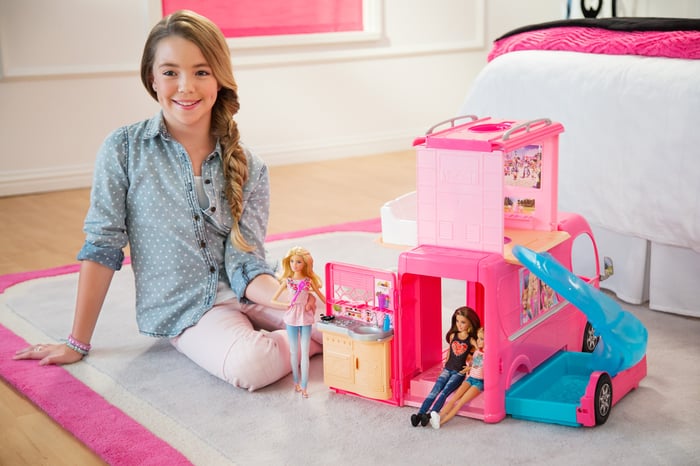 Mattel's turnaround plan finally gained traction in 2019 after a years-long slide, though it initially looked as though the the coronavirus outbreak would upend that recovery. As retail stores closed and global manufacturing and supply chains shut down, sales crashed and losses widened.

Yet it turned out lockdowns and stay-at-home orders also increased the demand for at-home entertainment, and Barbie and Hot Wheels were the perfect antidote to kids' boredom.

Constant currency revenue jumped 11% in the third quarter as Barbie gross sales rocketed 29% year over year, and Hot Wheels sales drove the vehicles category up 8%. It's still struggling with its Fisher-Price brand, however, and overall revenue was down 1% through the first three quarters of 2020.

Most of Hasbro's segments suffered significant slumps too, but the toy maker grew on the strength of its gaming portfolio, primarily Monopoly and Magic: The Gathering. Hasbro's declines, though, were also related to its business being closely intertwined with Hollywood and the film industry. As movie theaters shut down and film production ceased, that created a significant drag on performance as its TV, film, and entertainment segment declined 28% in the fiscal third quarter.

However, seeing how its rival has profited from deals for popular television series and movies, Mattel is pursuing similar opportunities in the entertainment industry. Beginning in 2019, it signed deals to develop movies for a much of its toy lineup, including American Girl dolls, Barbie, Hot Wheels, Masters of the Universe, and even one based on its stereoscopic 3D viewer View-Master.

The pandemic also highlighted the power of brands. Mattel faced significant headwinds during the pandemic and ongoing recession, but it was clear that falling back on reliable brands was a comfort to consumers during the chaos.

Key to Mattel's ability to recover and expand going forward are the investments it has made in digital. Three years ago, it partnered with NetEase to develop a broad portfolio of mobile games based on its toys, such as the card game Uno, Barbie, and Fisher-Price.

CEO Ynon Kreiz has said that toys will always be part of Mattel's DNA, but the future is about "commercializing our brands and finding transformative opportunities for us to be a part of other verticals that are directly adjacent to the toy industry."

That effort has paid off with e-commerce sales jumping 50% in Mattel's third quarter, forming another piece to a puzzle that seemingly came together all at once for the company.

That's not to say the toy maker isn't richly valued as of this writing. Shares are up 26% in the past year, and as you can see below, most of those gains came over the last three months following Mattel's solid third-quarter earnings report in October. 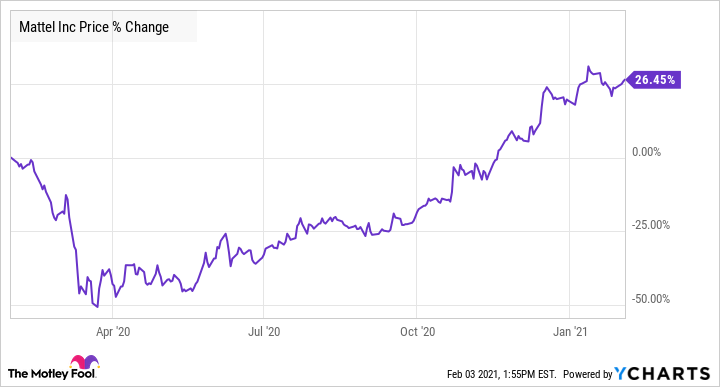 Mattel seems to have the momentum necessary to carry it forward in a post-pandemic world. Developing new projects as studios reopen; making its iconic brands known to a new generation of kids but doing so in a digital format; and diversifying its portfolio to protect itself from future disruptions will all work in its favor, and in favor of shareholders.

While I might still like Hasbro better as an investment, compiling a basket of toy makers with tailwinds beginning to swell at their backs isn't a bad strategy. An investor can own both companies, and in that regard, Mattel remains a stock investors should consider for their portfolio.