Please ensure Javascript is enabled for purposes of website accessibility
Log In Help Join The Motley Fool
Free Article Join Over 1 Million Premium Members And Get More In-Depth Stock Guidance and Research
By Matthew DiLallo - Feb 4, 2021 at 8:11AM

MPLX is generating more than enough cash to cover its big-time payout and expansion program.

Usually, a dividend yield above 10% is a huge red flag. However, that's not the case for MPLX (MPLX -1.34%). Despite continued headwinds in the energy market, the MLP is generating more than enough cash to cover its current payout and expansion program, which was evident in its fourth-quarter report and outlook for 2021.

Add that to its healthy balance sheet, and its big-time payout appears to be on rock-solid ground.

Drilling down into MPLX's fourth-quarter results

As that table shows, MPLX's financial metrics all headed in the right direction during the fourth quarter. Earnings and cash flow improved, while its coverage ratio went up and leverage declined. The strong end to the year helped fuel an improvement in its full-year metrics as adjusted EBITDA increased by 2.1% while DCF rose 5.5%, despite significant turbulence in the oil and gas market due to the pandemic.

Driving the year-end rebound was an improvement in both of its business segments: 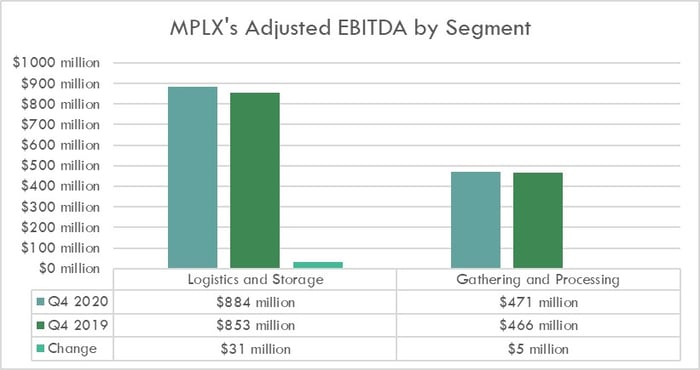 Logistics and storage income rose 3.6% during the quarter and 4.1% for the full year. Lower operating expenses and the strength of its contract profile drove that increase, which helped offset pandemic-related demand headwinds.

Meanwhile, earnings from its gathering and processing operations improved by 1.1% during the fourth quarter, though they declined by 1.7% for the full year. Lower operating costs fueled the quarterly improvement, which helped offset production curtailments due to lower oil and gas prices during the year.

The year-end improvement in its earnings and cash flow marked a key inflection point for MPLX. The company generated enough cash flow for the full year to finance its distribution and capital program with room to spare. When combined with its improving balance sheet, the MLP had the financial flexibility to launch a unit buyback program, repurchasing $44 million of its common units in the fourth quarter. 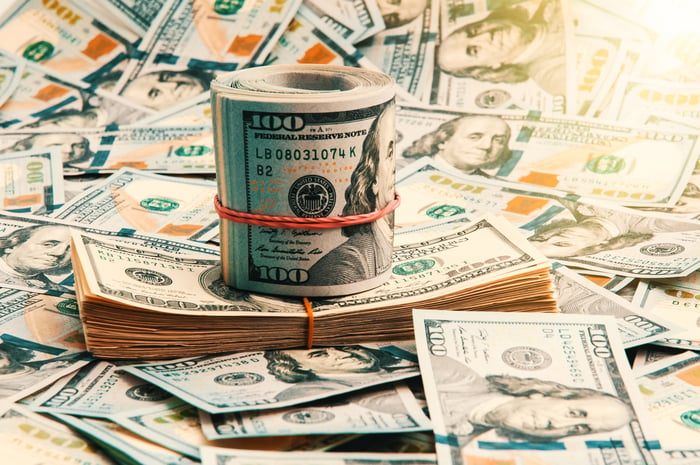 Due to the continued headwinds facing the oil market, MPLX only expects to invest $800 million in expansion projects this year. That's down from $878 million in 2020 -- a $700 million reduction from its initial budget -- and $2.5 billion in 2019, positioning it to continue generating excess cash after funding its capital program and distributions this year.

The bulk of that investment will complete the build-out of integrated oil and natural gas logistics systems from the Permian Basin to the U.S. Gulf Coast. The company and its partners are working toward finishing the Wink to Webster oil pipeline that should come online throughout the year. Meanwhile, it's also working toward completing the Whistler pipeline, which is on track to start up in the second half of 2021. It's also working with partners on a capital-efficient solution to bring additional natural gas liquids takeaway capacity from the Permian to the Gulf Coast. Finally, its gathering and processing segment recently completed the Agua Blanca pipeline system that should start full service early this year.

As those projects launch, they'll supply MPLX with incremental cash flow. Add that to the expected decline in capital spending, and it should produce an increasing supply of excess cash this year. That should enable the MLP to return additional money to its investors through further unit repurchases and potentially increase its distribution. Meanwhile, it currently only has one expansion project underway with a 2022 target in-service date, suggesting that capital spending could decline significantly in 2022. This would, in turn, position it to generate even more excess cash.

MPLX navigated the challenges of 2020 quite well. Because of that, the MLP was able to generate the cash to cover its high-yielding distribution and expansion program with room to spare. That cushion is on track to grow over the next several quarters, suggesting that its payout is on a firm foundation. That makes it an excellent option for investors seeking a big-time dividend yield.