Please ensure Javascript is enabled for purposes of website accessibility
Log In Help Join The Motley Fool
Free Article Join Over 1 Million Premium Members And Get More In-Depth Stock Guidance and Research
By Selena Maranjian - Feb 4, 2021 at 5:03AM

Don't let blunders and errors keep you from building a financially secure future.

[S]ome failure in life is inevitable. It is impossible to live without failing at something, unless you live so cautiously that you might as well not have lived at all -- in which case, you fail by default. -- Harry Potter author J. K. Rowling

Most of us invest money in stocks dreaming of how much they'll grow in value and how well they'll serve us as we save for retirement. Many of our holdings will indeed perform as hoped -- and some will far exceed our wildest imaginations. (My Netflix shares, for example, are up more than 10,000%!) But it's inevitable that we will occasionally fail, too. 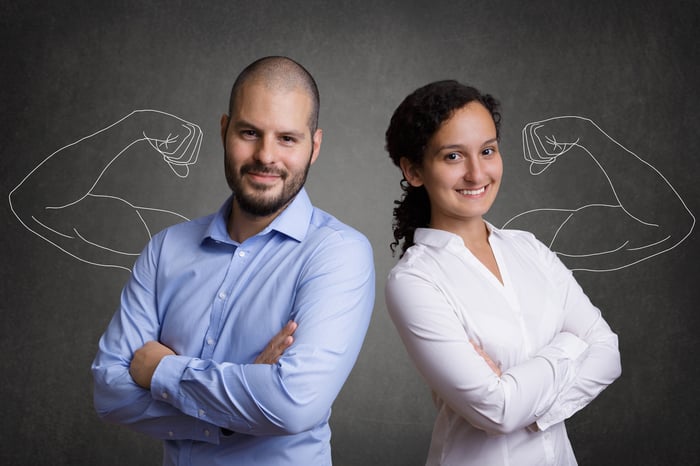 If you want investments with just about no chance of losing value, focus on choices such as bank savings accounts and government bonds. There's a downside, though: They will average far lower annual returns over long periods. And in today's interest rate environment, they'll grow at a snail's pace -- and a slow snail, at that. Check out the table below, which reflects the research of Wharton Business School professor Jeremy Siegel, who calculated the average returns for stocks, bonds, bills, gold, and the dollar, between 1802 and 2012:

Source: Stocks for the Long Run by Jeremy Siegel.

Clearly, stocks offer the best chance of long-term growth -- but it does come with an element of risk. Risk, after all, is correlated with return. The investments that offer the highest possible returns, such as lottery tickets, feature extreme risk. The lowest-risk investments, such as ones backed by the U.S. government, offer slow growth in exchange for low risk.

If you're going to invest in stocks, expect to fail now and then. Some of the investments that you're quite excited and hopeful about will disappoint you. It happens to the best, most experienced investors, too. Warren Buffett, for example, regrets not buying into Amazon.com long ago. He has said:

Among other mistakes he's discussed is Kraft Heinz, which he says he overpaid for: "It's still a wonderful business in that it uses about $7 billion of tangible assets and earns $6 billion pre-tax on that ... But we, and certain predecessors, we paid $100 billion in tangible assets. So for us, it has to earn $107 billion, not just the $7 billion that the business employs."

Big funds -- mutual funds and hedge funds alike -- fail, too. It was recently reported, for example, that Ray Dalio's Bridgewater Associates lost $12.1 billion in 2020. Here's a lesson, though: He's still "the best-performing hedge fund manager of all time," per the rankings of LCH Investments. Like Buffett, Dalio can commit blunders and see various investments lose ground and still, over the long haul, remain a winner.

Funds actually fail a lot. As of the middle of 2020, for example, the S&P 500 had outperformed 87% of large-cap stock mutual funds over the past 15 years, while about 81% of all small-cap and mid-cap stock mutual funds underperform their respective benchmarks. Hedge funds often fail, too. According to a recent Reuters report, "The average hedge fund returned 11.6% in 2020, according to Hedge Fund Research data, lagging behind the S&P 500 index' 16% gain."

Buffett has long known about the underperformance of hedge funds, and once bet a million dollars that over a decade, a group of five hedge funds, on average, would not outperform the S&P 500, an index fund that anyone can invest in while being charged minuscule fees, compared to the hefty fees of hedge funds. Buffett won that bet, handily. Over the 10 years, the five hedge funds' average annual gain was 2.1%, while the S&P 500 averaged 7.1%.

How to come out ahead

So if the best investors and the well-schooled professionals on Wall Street fail many times, do you stand a chance of building wealth with stocks yourself? You sure do. There are things you can do to reduce your risks, such as:

Meanwhile, if you don't think you can outperform the overall stock market when investing in individual stocks or actively managed mutual funds (or you don't want to bother trying), just stick with index funds. There's no shame or surrender in that -- it's a very reasonable and effective way to build long-term wealth.

Such steps can help you reduce your risk of failure, but they won't eliminate it. You'll still fail now and then. But here's the best news: If you're an effective long-term investor, your winners are likely to offset your losers -- by far. After all, a stock can only fall to zero, meaning your loss is capped at 100%, while winners can double and double and double in value over time. If you lose $3,000 here and $3,000 there, a single $25,000 gain can more than make up for it. Remember my 10,000%-plus gain in Netflix, too -- that has offset a lot of my losses.

Take on the risk of investing in stocks with your long-term money. Expect to fail now and then, but to win in the long run.