The numbers are small, but it's an important move for the company.

Chinese electric-vehicle maker Xpeng (XPEV 7.60%) said that it's shipping a batch of SUVs to Norway, the second shipment in the upstart automaker's effort to build a market for its vehicles in Europe.

Xpeng said that "over 200" of its battery-electric G3 SUVs were loaded onto a ship in the port of Guangzhou that departed for Norway on Thursday.

Norway has the highest rate of electric-vehicle ownership in the world, a result of favorable government policies and early enthusiasm for Tesla's (TSLA 7.43%) Model S. The G3, priced at about $41,000 in Norway, offers local buyers a more affordable option with good range and fairly advanced technology. 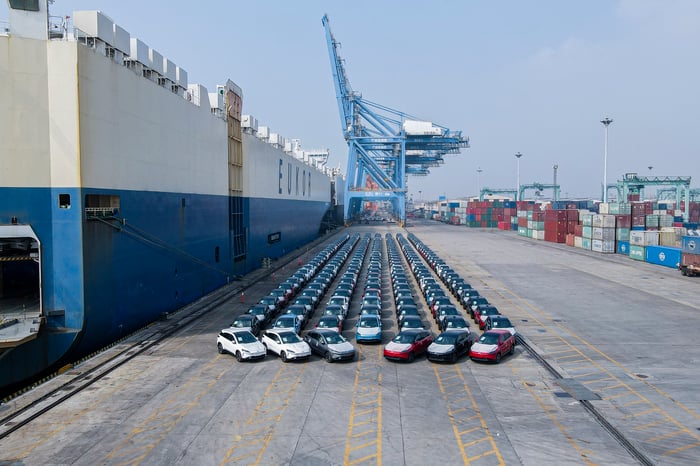 Over 200 Xpeng G3s left on a Norway-bound freighter on Thursday. image source: Xpeng.

Xpeng delivered its first batch of G3s to Norway in December. Those vehicles, the company said, will soon receive an over-the-air update that will add new voice-command options and upgrades to the vehicles' adaptive cruise control and lane-centering systems.

The numbers are small, but the fact that Xpeng is able to sell vehicles in Europe is a powerful marketing tool that it can use at home in China. While Tesla sells vehicles all over the world, Xpeng's local rivals -- NIO (NIO 9.49%) and Li Auto (LI 7.95%) -- have yet to sell vehicles outside of China, much less in what is seen as an advanced market with high standards.

Xpeng said earlier this week that it delivered 6,015 vehicles in China in January, its third straight monthly record. The company is expected to report its 2020 earnings later this month.