Please ensure Javascript is enabled for purposes of website accessibility
Log In Help Join The Motley Fool
Free Article Join Over 1 Million Premium Members And Get More In-Depth Stock Guidance and Research
By Adria Cimino - Feb 6, 2021 at 6:32AM

There's good news for those organizing vaccine logistics and the people sticking out an arm.

Johnson & Johnson (JNJ 0.42%) is about to cross the coronavirus vaccine race finish line. But cheers may not be as loud as they were for rivals Pfizer (PFE 1.32%) and Moderna (MRNA 4.42%). That's because the big pharmaceutical company reported efficacy that lagged that of those earlier-to-market rivals.

So that's bad news... right? Not necessarily. First, we have to put the efficacy data into context. That means looking at how the coronavirus pandemic has evolved. New strains in the U.K., Brazil, and South Africa gained ground as Johnson & Johnson's trial unfolded. And second, we should focus on the one big positive that could result in major market share for Johnson & Johnson. Let's take a closer look. 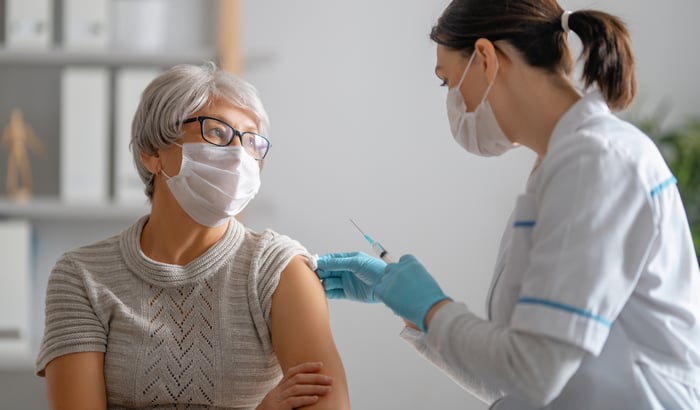 When Pfizer and Moderna reported data late last year, we were looking to see whether the vaccine candidates could handle the original strain of the coronavirus. Both proved to be more than 94% efficacious. Johnson & Johnson -- and others reporting now and in the future -- are in a different situation. Their vaccines came up against the new variants as well. But, like Pfizer and Moderna, these companies designed their vaccines to target the original virus. All of this means we shouldn't be surprised if its efficacy is lower than that of Pfizer and Moderna.

Pfizer and Moderna recently tested their vaccines in vitro and said they can prevent the new strains. But we don't have an efficacy readout from a clinical trial setting. That makes it difficult to perfectly compare Johnson & Johnson's vaccine performance to that of Pfizer and Moderna in today's coronavirus situation.

So, let's turn our focus back to Johnson & Johnson alone. Considering the increase in variants during the time of the pivotal trial, I think that the vaccine candidate produced decent results.

From "decent" to "pretty strong"

But there's another element of the Johnson & Johnson vaccine that is particularly compelling: It involves only one dose. The Pfizer and Moderna vaccines are both administered in two-dose regimens. Novavax's (NVAX 8.23%) close-to-market candidate is also a two-dose shot. That means Johnson & Johnson produced these decent results with only one jab. So, instead of saying the results are "decent," we might want to say they're pretty strong.

What's so great about a one-dose vaccine? For those of us holding out an arm, it means one uncomfortable jab instead of two. Most people would appreciate that. And it's even better for governments and hospital systems. Vaccine supply and distribution have been a problem. Many people who've received one dose of vaccine worry more doses won't arrive in due time for the second shot. With a one-dose vaccine, more people can be fully vaccinated with a given supply of product. And of course, storage and transportation become easier to tackle too.

Johnson & Johnson applied for Emergency Use Authorization (EUA) on Feb. 4. The company said it will be ready to distribute doses immediately following a possible EUA. If the company's timeline is anything like that of Pfizer and Moderna, its vaccine may be on the market as early as March.

Right now, the world needs more doses than Pfizer, Moderna, and Johnson & Johnson could produce. So all three can thrive in this market. But down the road, once the pandemic is over, Johnson & Johnson's one-dose vaccine could gain in market share -- and even become the market leader.

But this vaccine isn't a make-it-or-break-it product for Johnson & Johnson. This big pharmaceutical company's vast array of products generate billions of dollars in revenue every quarter. Nonetheless, the addition of a coronavirus vaccine is a bonus that investors will appreciate.