Please ensure Javascript is enabled for purposes of website accessibility
Log In Help Join The Motley Fool
Free Article Join Over 1 Million Premium Members And Get More In-Depth Stock Guidance and Research
By Rick Munarriz - Feb 7, 2021 at 10:00AM

The live TV streaming service is nearly a five-bagger since going public four months ago. Let's see how it can keep scoring.

This is a big sports weekend, so let's kick the tires of a next-gen streaming platform that wants to be your ticket into the live TV game. Bulls can't complain about the fuboTV (FUBO 3.68%) playbook in the hot stock's brief life as a publicly traded company. It's nearly a five-bagger since its $10 IPO four months ago.

The bullish case for fuboTV is simple. Folks are dumping their clunky cable and satellite television subscriptions in droves. There's a glut of cheap streaming services to fill that time, but you need a pricier live TV streaming option if you want access to a wide gamut of televised sporting events.

The bearish argument against fuboTV is also simple. Programming costs for live TV streaming services are spiraling out of control, and eventually consumers will just stick to the corded devil they know. Spunky upstart fuboTV is also competing against media moguls and titans of tech and telco with deeper pockets than this one-trick pony.

Wall Street pros are equally divided when it comes to fuboTV. Analysts have price targets as high as $60 and as low as $6.50 on the stock. Who is right? Will fuboTV fumble the ball or is it the next great millionaire maker stock? Let's hit the field to check things out. 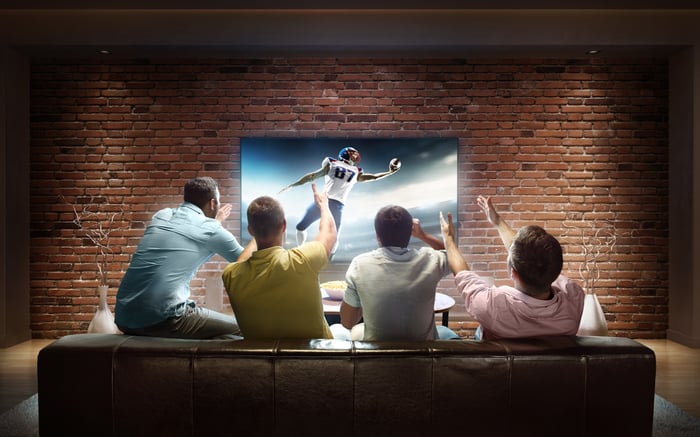 There's some truth to the rumblings in the naysayer camp. The marketing pitch for fuboTV is that it's the "sports first" choice for fans with more than three dozen channels dedicated to live sports, but there are some blind spots in that coverage. It lost access to Fox regional sports networks last year. It swapped out Turner networks for ESPN last summer. Is broadcasting select sporting events in 4K enough? The bears are also right that fuboTV competes against giants that can remain solvent longer in a cutthroat market.

The bulls have a longer list of accolades. Yes, this is a competitive niche, but fuboTV's monthly rates are growing faster than its costs per subscriber. The platform has also proven to be magnetic for marketers. It generates an average of $7.50 a month per account in advertising on top of its subscription fees, as the average fuboTV viewer is watching four hours of content a day.

Then we get to the real potential differentiator in gambling. A pair of interesting acquisitions -- Balto Sports in December and Vigotry in January -- finds fuboTV promising a fantasy sports gaming offering this summer. An even more lucrative sportsbook platform should be available by the end of the year.

The "sports first" bent is a good hook, but the potential of high-margin gambling revenue is even better. The country's two most popular live TV streaming services are owned by a family entertainment giant and an online search leader that can't even get regulators to sign off on an acquisition of a fitness tracker maker. You're not going to see them -- or the telcos and satellite television providers also in this niche -- raise the ante on fuboTV's bet on betting.

This brings us to growth. No one is growing faster than fuboTV these days. Revenue rose 71% in fuboTV's first quarter as a public company, and it now expects its top line to clock in 77% to 84% higher in the quarter that ended in December.

Sure, fuboTV is still small. It's at just 545,000 subscribers in a market where the leader has more than 4 million accounts. However, fuboTV was at just 316,000 a year ago.

There are valuation concerns here, but reality so far has exceeded Wall Street forecasts. We've seen fuboTV boost its 2020 year-end subscriber guidance three times in the past four months, and this is before we see it twist the spigot of fantasy sports and outright wagering later this year. You have to like fuboTV's chances to continue making short-sellers regret rooting for the away team. Yes, fuboTV is a millionaire maker.