Please ensure Javascript is enabled for purposes of website accessibility
Log In Help Join The Motley Fool
Free Article Join Over 1 Million Premium Members And Get More In-Depth Stock Guidance and Research
By John Ballard - Feb 7, 2021 at 11:12AM

Investors shouldn't underestimate the growth potential of the sportswear giant.

Nike (NKE -1.00%) has been a consistent winner for shareholders over the years. Even though the sneaker giant is approaching $40 billion in annual revenue, the swoosh just keeps growing.

Over the last five years, the stock has more than doubled in value, but what we want to know is this: Can Nike sustain its momentum long enough to turn a small investment into a million dollars? 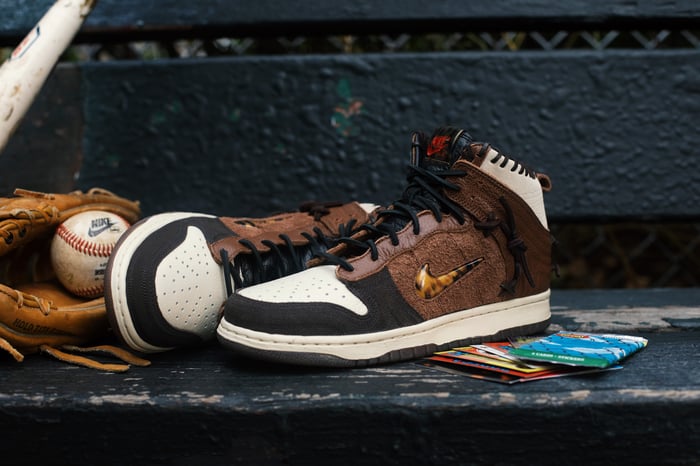 Nike's past returns and growth

The first thing to consider is Nike's historical rate of return. Since the company has had a very similar main product line throughout the nearly 50 years it has been selling shoes under the Nike trademark, we shouldn't expect the stock to deliver a higher return than what it has historically.

A $10,000 investment in Nike stock in 1990 would have grown to be worth $1.58 million today, including dividend reinvestment. 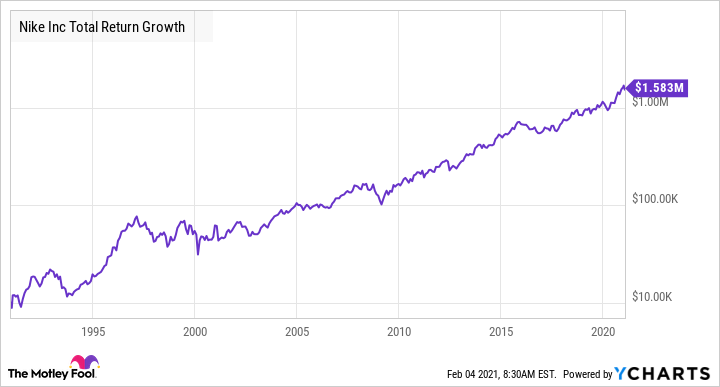 Keep in mind, Nike was growing revenue much faster in the 1990s than it is today. In fiscal 1995, revenue grew 25%. At the time, revenue had climbed fivefold over the previous 10 years from fiscal 1985.

Since fiscal 2010, Nike's revenue has only doubled, which reflects a slowing growth rate as Nike's business gets larger.

The important thing to remember is that, while stocks can do anything in the short term, there is a high correlation between a company's growth in profits and the return of the stock price over a long period of time.

Nike's long-term goal is to grow revenue at a high-single-digit rate and grow earnings per share in the mid-teens range. If Nike can sustain that level of earnings growth over 30 years, it's certainly possible that a $10,000 investment could be worth more than $600,000 in 30 years.

Any company that is growing over a long period of time can deliver massive gains if you hold the stock long enough. That's the beauty of compounding interest, and why stocks are great wealth-building tools.

Nike's revenue target is a reasonable goal given that the athletic apparel industry continues to show signs of expansion. Other fitness brands like lululemon athletica and Peloton Interactive are also showing strong growth. One estimate placed the sports apparel market at $167 billion in 2018 and expected to reach $248 billion by 2026.

Nike has been growing in line with the industry. Between fiscal 2016 and fiscal 2019, Nike grew revenue at a compounded rate of 6.5%, but revenue growth was accelerating above that rate in fiscal 2020 right before the pandemic hit. Earnings per share didn't grow as much over those three years due to investments to support the growth of the digital business.

If Nike can deliver on its long-term outlook, you could turn a small investment into a million bucks, or at least get within striking distance. Here's how Nike can deliver.

Nike's investments in the direct-to-consumer business are laying the foundation for improving margins and growing profits.

The swoosh remains a hot brand, which is driving explosive growth through Nike's mobile apps, particularly SNKRS, where Nike drops highly anticipated sneakers in limited quantities that sell out quickly. For the fiscal second quarter ending in November, Nike reported that its mobile apps grew 200% year over year.

Nike's total revenue growth clocked in at 7% in the last quarter, excluding currency, consistent with management's long-term target. Nike's digital channel now makes up more than 30% of the business, and management sees it reaching 50% in the near future.

Nike is now a digital-first company, and since digital sales generate higher profits than sales through wholesale channels, earnings per share should grow faster than Nike's single-digit revenue target over the long term. This is why analysts are currently forecasting Nike to post annualized growth in earnings per share of 34% over the next five years.

During the fiscal second-quarter conference call, CEO John Donahoe summed up the key drivers that should fuel this growth stock higher over time. "The structural tailwinds we're seeing, including permanent shifts toward digital, athletic wear and health and wellness, continue to offer us incredible opportunity," he said.

Not many consumer discretionary companies can sustain a mid-teens level of earnings growth over several decades, but I will never say never about any great business. Look at it like this: Nike has been around for about 50 years, and management is still talking about growing earnings at double-digit rates.

So, yes, Nike is a millionaire-making stock, but you must be willing to hold the shares for a long time.