Please ensure Javascript is enabled for purposes of website accessibility
Log In Help Join The Motley Fool
Free Article Join Over 1 Million Premium Members And Get More In-Depth Stock Guidance and Research
By Zhiyuan Sun - Feb 7, 2021 at 6:55AM

Reddit investors are sure hyped up about shares of this biotech underdog. Should you be as well?

When investors learn about companies developing life-saving coronavirus vaccines, they usually feel a sense of hope and enthusiasm. But that's not the case with Inovio Pharmaceuticals (INO 2.13%). Even though it's the first company attempting to develop a DNA-based coronavirus vaccine, Inovio stands out among other vaccine drugmakers. Nearly 28% of its outstanding shares are sold short.

Due to its rather unusual trading activity, the stock has attracted the attention of communities of contrarian traders. Many of them originated from the r/WallStreetBets subreddit and took part in a massive short squeeze on GameStop (GME 0.49%) that delivered multi-ten-bagger returns in a very short period of time. Could Inovio also witness a short squeeze, becoming the new GameStop? 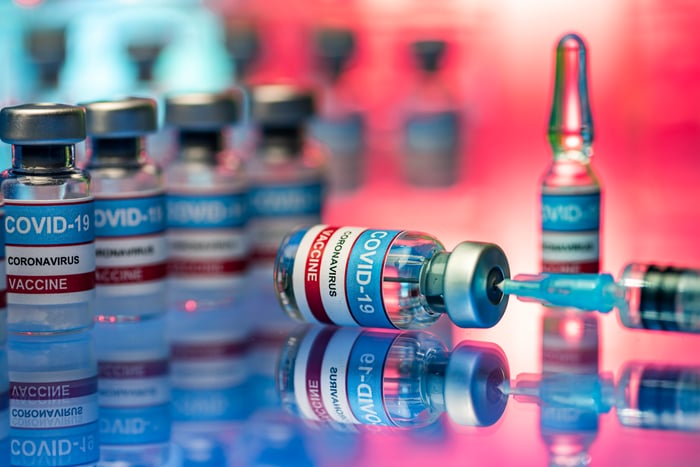 Can it bring a coronavirus vaccine to market?

Inovio ran into problems with INO-4800 right from the get-go. First of all, the company has tried its hand at developing vaccines for pandemic viruses in the past and could not get them out promptly. Secondly, its record of consistently selling more cash to raise funding (and thereby diluting its investors) received heavy scrutiny from the short-selling firm Citron Research. Thirdly, it ran into a legal dispute with the contract manufacturer for its experimental vaccine.

Finally, the U.S. Food and Drug Administration (FDA) halted the latter part of INO-4800's phase 2/3 clinical trial due to concerns about the medical device used to administer the vaccine in the study. For all these reasons, there have been no pre-orders of its experimental vaccine. With INO-4800 passing peer review, however, that might change for good.

During phase 1 clinical trials, 78% to 84% of healthy volunteers who received INO-4800 developed neutralizing antibodies against the coronavirus. Furthermore, INO-4800 induced T-cell responses among 74% to 100% of participants, potentially protecting them against the virus for an extended period of time. It has not said anything about INO-4800's efficacy against mutant strains of the coronavirus, however. The vaccine was also well-tolerated with only minor safety issues.

Those results are comparable to -- if not slightly worse than -- the data from authorized coronavirus vaccines in their early-stage investigations. Right now, the company's experimental vaccine is undergoing phase 2 trials. Inovio anticipates bringing INO-4800 to phase 3 during the second quarter of the year. The Department of Defense is fully funding both trials. Furthermore, the two-dose vaccine is stable at room temperatures, thereby making delivery much easier than vaccines requiring refrigeration or freezing.

At least one institutional investor seems to believe in Inovio's potential. In a recent filing, BlackRock (BLK 1.84%) disclosed that it increased its stake to 8.4%, or 14.2 million shares outstanding, from 5.2% last year. The stock has doubled investors' money over the past year.

Right now, Inovio's market cap is just $3.8 billion. Companies that have had their COVID-19 vaccines authorized by the FDA and purchased by the U.S. are expecting to bring in 10 to 11 figures in annual revenue. For instance, Moderna has said it expects more than $11 billion of sales in 2021 from its vaccine. If Inovio can bring its vaccine to market, it will be competing against the existing vaccines, and the U.S. has already secured enough doses from Pfizer and Moderna to vaccinate nearly all of its 328 million people in 2021 -- assuming no booster shots are needed for mutant strains and no vaccines go to waste. Furthermore, Inovio has also run into problems its competitors did not encounter -- but has nonetheless resolved quite a few.

A relatively evident and unresolved issue is its spree of stock offerings, despite having more than $337 million in cash and equivalents. On Jan. 25, it issued 2.6 million more shares for gross proceeds totaling $173 million. Over the past year, the company's share count has increased by about 30%.

Overall, I'd rate Inovio as a buy, as it also has a solid immuno-oncology pipeline to offset INO-4800 in case the latter disappoints. Keep in mind, however, that despite its high-reward potential, investing in Inovio stock is about as risky as it gets. If you don't have that kind of appetite, consider these much safer biotech stocks instead.