Please ensure Javascript is enabled for purposes of website accessibility
Log In Help Join The Motley Fool
Free Article Join Over 1 Million Premium Members And Get More In-Depth Stock Guidance and Research
By Keith Noonan - Feb 7, 2021 at 11:41AM

Shares of eXp World Holdings (EXPI -0.36%) rose 68.9% in January, according to data from S&P Global Market Intelligence. The stock posted big gains as the real estate software company announced expansion into new geographic markets and a two-for-one stock split in the form of a special dividend. 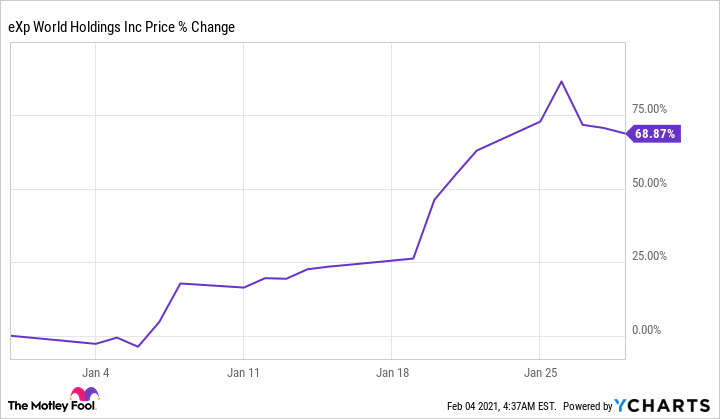 eXp published a press release on Jan. 7 announcing that it would be expanding into four new markets in the first quarter of 2021: Puerto Rico, Brazil, Italy, and Hong Kong. The company then announced on Jan. 19 that its board of directors had approved a two-for-one stock split in the form of a dividend. 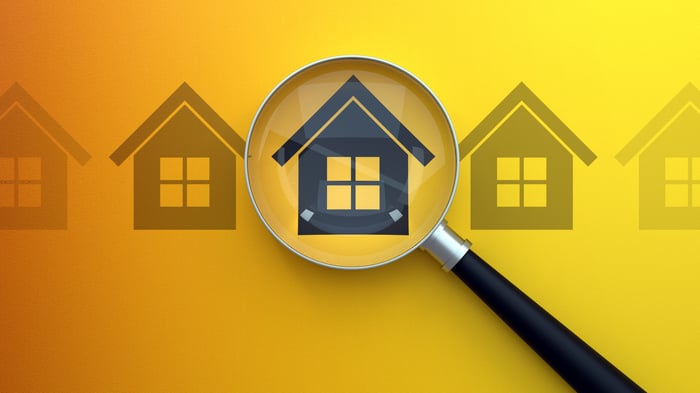 In addition to completing its launch in Puerto Rico in January, eXp is also currently operating in Canada, France, India, Australia, Mexico, Portugal, and South Africa. The company also expanded its operations in Canada in the month, launching in Manitoba and New Brunswick.

Expansion for its real estate services created momentum for the stock, and the subsequent announcement of what looks to be a favorable stock split helped push shares substantially higher. Management stated that the purpose of the dividend stock split was to make stock ownership more accessible for employees and investors.

Shareholders of record as of Jan. 29 announced that it would receive one additional share of common stock that will be distributed after market close on Feb. 12. Shares will then begin trading on a stock-split-adjusted basis on Feb. 16.

eXp stock has continued to soar early in February's trading. The company's share price is up more than 26% in the month so far. 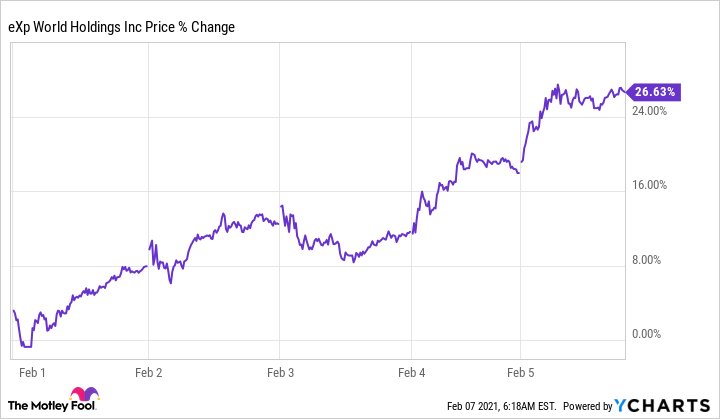 eXp's business has been growing at a rapid clip, with third quarter revenue expanding 100% year over year and reaching a record $564 million. The company has shown signs it may be on the verge of shifting into consistent profitability, but margins remain at the low end for a company in the cloud services space.

eXp has a market capitalization of roughly $9.4 billion and is valued at approximately 3.9 times this year's expected sales and roughly 197 times expected earnings. The company has a growth-dependent valuation, but software-based real estate services have huge room for expansion over the next decade and beyond, and the business's momentum has been undeniably impressive.