Find out what these two red-hot stocks are doing to earn investors' love.

The stock market continued to move sharply higher on Monday morning, sending the Nasdaq Composite (^IXIC 0.00%) to new record levels. As of 11 a.m. EST, the Nasdaq was up about 0.7%, closing to within striking distance of the 14,000 mark. Big-name companies like Tesla (TSLA -0.32%) and NVIDIA (NVDA -1.50%) featured prominent with significant gains to start the week.

Yet there were much bigger moves in a couple of Nasdaq stocks that have only recently pushed their way into the spotlight. Neither Ocugen (OCGN -2.79%) nor Cassava Sciences (SAVA 1.35%) is a household name among most investors, but the two biotech stocks have been on fire lately and continued to rise on Monday morning. Here's what's happening to keep their momentum going. 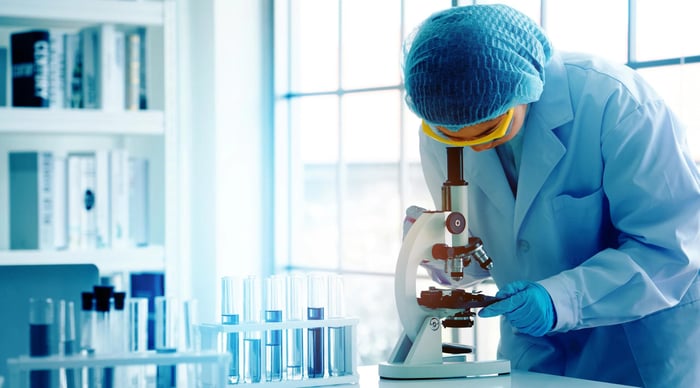 Ocugen gets some cash

Shares of Ocugen more than doubled on Monday morning. The clinical stage biotech stock's share price is now more than six times what the stock fetched just a week ago at the beginning of February.

What pushed Ocugen higher Monday was highly unusual news. The company did a direct offering of common stock to raise capital, which isn't an uncommon thing for a company to do after its stock has jumped so far. Yet what's amazing is that it sold 3 million shares at a price 46% higher than where the stock closed on Friday afternoon. Investors were willing to pay $7.65 per share on a stock whose most recent closing price was $5.25, helping Ocugen raise $23 million.

Investors have been increasingly excited about Ocugen's strategic partnership with India's Bharat Biotech, under which Ocugen will work to commercialize Bharat's Covaxin vaccine for COVID-19. If the vaccine can gain emergency use authorization from the U.S. Food and Drug Administration, Ocugen stands to get a 45% share of profits from U.S. sales of Covaxin.

Demand for coronavirus vaccines is high, and that gives Ocugen a huge chance at a big payday. With Covaxin having gained authorization for use in India, investors are more optimistic than ever that the vaccine can duplicate that success to serve the U.S. market.

Elsewhere, shares of Cassava Sciences were higher by 36%. The biotech company is moving forward with its development plans for what could become a breakthrough for treating Alzheimer's disease.

Cassava reported what it called "significant program progress" for its simufilam drug candidate for Alzheimer's and detailed the milestones it hopes to achieve in 2021. Specifically, Cassava wants to start a phase 3 clinical trial for the candidate treatment in the second half of this year, expanding target enrollment to 150 patients and taking steps to broaden its studies and provide interim analysis as results come in.

Cassava has two goals for separate studies. One will attempt to show that the treatment will slow the rate of cognitive decline and reduced daily function in patients. The other is actually targeting improvement over a six-month period.

Investors have been highly pleased at data Cassava has already released from earlier-stage studies of simufilam. With the biotech's ambitious plans for the future, those with loved ones struggling with Alzheimer's hope that Cassava will give them a breakthrough in finally finding a successful treatment for the disease.

Why Ocugen and Nikola Are Powering the Nasdaq Higher

Why Ocugen and UWM Soared While the Stock Markets Went Nowhere