Business is so good that Canaan should be running at capacity in 2021.

Shares of Canaan (CAN 0.31%), a company that manufactures hardware for mining Bitcoin (BTC -0.05%), soared today due to upbeat financial guidance. As of 12:30 p.m. EST, the stock was up 13%, even though Bitcoin and other Bitcoin stocks were down sharply.

In its press release today, Canaan's management let investors know that it has a really good idea of how its business is going to go: It's going to be running at capacity. The company has preorders for over 100,000 Bitcoin-mining machines, which management says is about all it can make with its current manufacturing facilities. This is a positive development for a company whose third-quarter revenue was down 76% year over year. 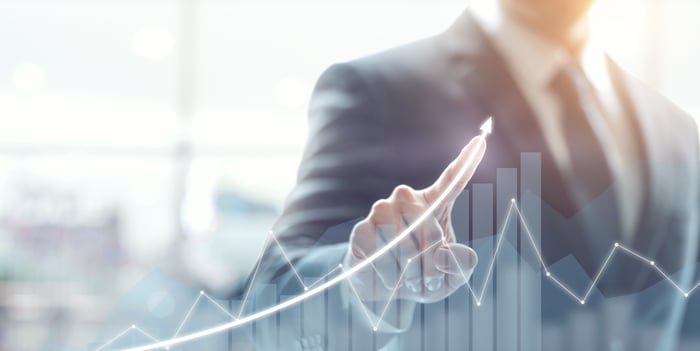 This development from Canaan isn't a total surprise. After all, the price of Bitcoin has risen dramatically in recent months, and that attracts more miners to the pool. When more miners join the Bitcoin blockchain network, it adds to the hashrate. According to Blockchain.com, the total hashrate for Bitcoin has spiked to all-time highs in recent days.

This means more miners are buying equipment to keep up with the competition. So companies like Canaan should benefit in the short run from this crypto boom. And the company's full-year visibility is especially handy. Good management can do a lot with that. These are good things.

That said, this financial update is oddly timed. Yesterday, Canaan announced its former CFO abruptly left the company for personal reasons. You wouldn't expect such an important financial announcement just one day after a CFO's departure. And to give investors something else to consider, this isn't the first time business has boomed for Canaan. A few years ago, when Bitcoin was all the rage, the company saw bumper revenue. But a boom cycle can be followed by lean times when miners slow their purchases.