Please ensure Javascript is enabled for purposes of website accessibility
Log In Help Join The Motley Fool
Free Article Join Over 1 Million Premium Members And Get More In-Depth Stock Guidance and Research
By Rich Smith - Feb 10, 2021 at 11:32AM

A rival is coming to market, on car lots and in the stock market as well.

Shares of electric-car maker Tesla (TSLA -5.88%) dropped nearly 6% in early trading on Wednesday in response to a Bloomberg report last night that upstart e-car rival Rivian is preparing for an IPO. 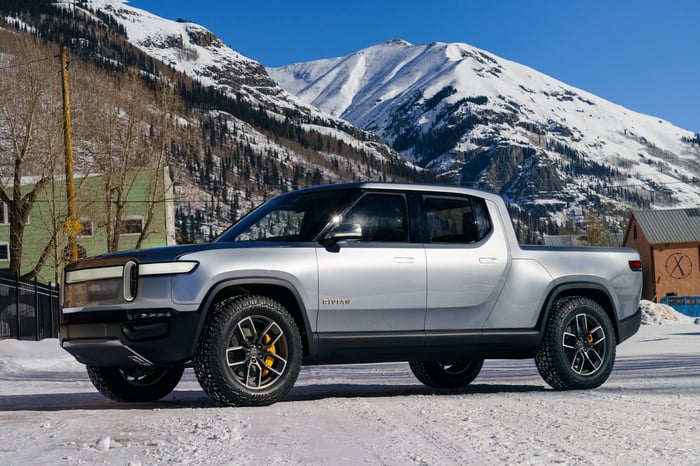 This electric pickup is made by Rivian, and that could be a problem for Tesla stock. Image source: Rivian.

Rivian seeks to go public as early as September, Bloomberg reports, targeting a $50 billion valuation initially. That may not sound like much of a threat to Tesla, which is currently valued at nearly $800 billion. But Bloomberg said that Rivian is "one of the highest-profile potential competitors to Tesla" and has raised more than $8 billion to date from investors.

This suggests that interest in Rivian could siphon away some of Tesla's stock market enthusiasm. Meanwhile, in the real world, Rivian is focusing on building electric SUVs and pickups, targeting one segment of the automobile market where Tesla has struggled (with its Model X SUV) and another where it has yet to begin selling vehicles (pickup trucks).

Citing people familiar with the matter, Bloomberg notes that Rivian's IPO might not happen until late this year, or even 2022. Also, the valuation could wobble. As recently as January, private funding of Rivian valued the company at less than $28 billion, barely half the valuation it is said to be targeting.

But stock speculation notwithstanding, Rivian will come to market as a force to contend with, boasting a contract in place to build 100,000 electric vans for Amazon (AMZN -1.98%). With the first 10,000 of these vans expected to hit the market as early as next year, expect enthusiasm for Rivian -- and competition with Tesla -- to be fierce.