Please ensure Javascript is enabled for purposes of website accessibility
Log In Help Join The Motley Fool
Free Article Join Over 1 Million Premium Members And Get More In-Depth Stock Guidance and Research
By Keith Speights - Updated Feb 12, 2021 at 6:49AM

Here's why they're such great picks.

Revolutionary! Game changing! You hear those superlatives used a lot to describe companies and their products.

Unfortunately, in most cases, those companies and products aren't going to come close to sparking a revolution or changing any game. Many of them won't even make investors a lot of money, either.

But there are some businesses that truly deserve those lofty descriptions. They're likely to generate sizzling long-term returns, too. Here are three such revolutionary stocks that absolutely hold the potential to make you rich. 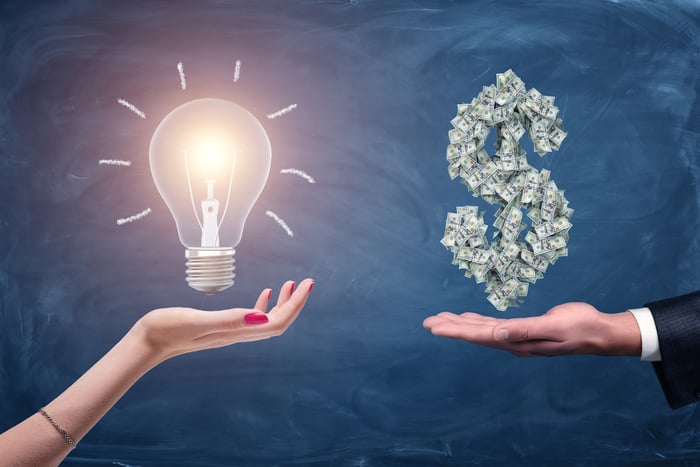 Believe it or not, the vast majority of freelancing still isn't done online. That's changing, though. And Fiverr (FVRR 7.97%) provides an e-commerce platform that's perfect for accelerating this migration.

Fiverr calls its business model "Service-as-a-Product (SaaP)." The company's goal is to make it as easy for buying and selling digital freelancing services as it is to buy a product on Amazon.com. One way Fiverr is achieving this goal is by eliminating friction in the process. Buyers benefit from transparency about what they'll get and what they'll pay. Freelancers don't have to endure the hassle of negotiating contracts.

The company makes money primarily by charging a 5% service fee to buyers of digital services and takes a 20% cut of the freelancer's revenue earned. It also offers other products, including freelancer business-management software and "Promoted Gigs" -- a service that enables freelancers to promote their services on its platform.

Fiverr is growing fast, with revenue soaring 88% year over year in Q3. But it still has plenty of room to run, with a current addressable market of $115 billion and a market cap that's under $11 billion.

Cancer is often diagnosed too late for treatments to be effective. Even with relatively early diagnoses, physicians sometimes aren't 100% sure which therapy will be the best for their patients. Guardant Health (GH 11.63%) develops products that can address these issues.

The company is a pioneer in liquid biopsy. Unlike tissue biopsies, which require a surgical procedure, Guardant Health's liquid biopsies use a simple blood test. An analysis is performed to detect fragments of DNA from tumor cells in the blood.

The potential addressable market for liquid biopsy products tops $70 billion in the U.S. alone. Guardant Health is launching a new product this quarter to target the cancer recurrence monitoring opportunity. It's also testing a liquid biopsy for early stage cancer detection in clinical studies. With its market cap still below $17 billion, this healthcare stock should be a huge winner for investors who buy and hold.

If using robots to help perform surgeries isn't revolutionary and game changing, what is? That's exactly what Intuitive Surgical (ISRG 2.62%) has made possible for more than two decades with its da Vinci robotic surgical system.

Last year, more than 1.2 million procedures were performed worldwide using the da Vinci system. It's important to note, though, that this number is lower than it would've been because of the COVID-19 pandemic.

Intuitive Surgical CEO Gary Guthart said in the company's Q4 conference call that there's still some uncertainty about the impact of the pandemic over the next few quarters. However, he expressed optimism about Intuitive's long-term prospects.

There are good reasons behind Guthart's confidence. Aging populations across the world over the next few decades will drive demand for the kinds of procedures that are well-suited for robotic assistance. Intuitive Surgical should have opportunities to expand more into international markets.

However, the biggest growth driver of all for Intuitive Surgical will be what's made it successful so far -- its technological innovation. Most surgical procedures today can't be performed using robotic systems. Intuitive's opportunity is to change that.

I predict that it will do so, and make investors who own this revolutionary stock a lot richer over the long term.