Please ensure Javascript is enabled for purposes of website accessibility
Log In Help Join The Motley Fool
Free Article Join Over 1 Million Premium Members And Get More In-Depth Stock Guidance and Research
By Adria Cimino - Feb 13, 2021 at 7:13AM

More trial data is on the horizon.

Novavax's (NVAX -7.50%) investigational coronavirus vaccine is on its way to the big finish line: regulatory authorization. The company recently reported positive phase 3 data. And now, regulatory agencies in the U.S., Europe, the U.K., and Canada are conducting rolling reviews. If Novavax follows in the footsteps of more advanced rivals Pfizer (PFE 1.50%) and Moderna (MRNA -1.20%), we could imagine a vaccine on the market in a matter of weeks.

But one element may hold Novavax back in the U.S. While the U.S. Food and Drug Administration (FDA) may still grant the candidate emergency use authorization (EUA), the agency might wait a bit longer to make its decision. Let's take a closer look at why the FDA might take its time on this one -- and what it means for Novavax investors. 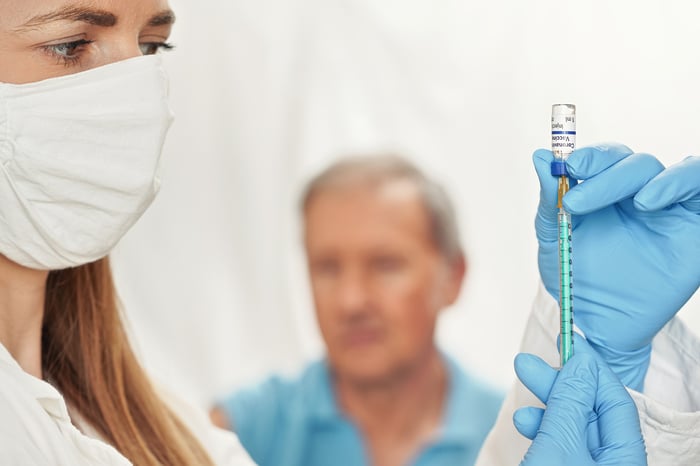 Last month, Novavax reported data from its U.K. phase 3 trial. But the biotech company also is conducting a phase 3 trial in the U.S. and Mexico. Novavax launched that trial in December and aims to include 30,000 volunteers across more than 100 sites.

It's very likely the FDA will wait until Novavax generates data from this trial before granting the vaccine candidate an EUA. The U.S. trial report would offer regulators more information regarding the candidate's performance. And waiting a few more weeks won't affect the U.S. vaccination campaign. The U.S. already is vaccinating Americans with the Pfizer and Moderna vaccines. And President Joe Biden just ordered enough vaccines from those two companies to immunize nearly the entire population. So, there isn't a pressing need to authorize other vaccines immediately.

How long of a delay can we expect in this case? Well, let's use the U.K. trial as a guide. Novavax launched that one in late September and reported interim data four months later. If the U.S. trial follows that timeline, we may expect data in late April.

Under the rolling review process, the FDA now is studying Novavax's U.K. trial data and will examine further results as they become available. If the FDA reviews the U.S. data for about the same amount of time it spent on the Pfizer and Moderna phase 3 results, the agency may issue a decision in mid-May. That could be earlier if the U.S. study clearly confirms the U.K. data -- or shows superior performance.

Meanwhile, it's likely the U.K. -- and perhaps other areas like the European Union – will make a decision earlier. Novavax showed in its U.K. trial that the vaccine candidate was 85.6% effective against the U.K. strain. That may encourage the U.K. to authorize the investigational vaccine. The EU also is struggling with the U.K. strain -- and vaccine shortages. Those elements may work in Novavax's favor.

Whether the FDA authorizes Novavax's vaccine now or in two months won't make a huge difference. As mentioned earlier, the Biden administration finalized new orders for the Pfizer and Moderna vaccines. These orders give the country enough doses to vaccinate 300 million Americans. The U.S. population stands at about 330 million -- and that includes children or others who aren't eligible for the vaccine. That doesn't leave much room for other players in the near term.

But all is not lost. Once the rush to get Americans vaccinated is over, the government likely will order more vaccines for later use. That's where Novavax could win if its efficacy is in line with rivals or better. The company already offers two strong points: a vaccine that can be stored at regular refrigerator temperatures and the ability to produce as many as 2 billion doses annually.

And if regulators give Novavax the nod, this clinical-stage company may post billions of dollars in product revenue -- as soon as this year. Governments around the world already have ordered more than 280 million vaccine doses from the company. So even if Novavax takes a few extra weeks to cross the finish line, this biotech company -- and its investors -- could still get the trophy.