Please ensure Javascript is enabled for purposes of website accessibility
Log In Help Join The Motley Fool
Free Article Join Over 1 Million Premium Members And Get More In-Depth Stock Guidance and Research
By John Ballard - Feb 14, 2021 at 8:13AM

The company is stepping up the investment behind its EA Sports label as the demand for sports gaming intensifies.

Electronic Arts (EA 0.89%) is having a record year, and management is already forecasting more growth in fiscal 2022. Looking further out, the company believes it can more than double its players and viewers to 500 million over the next five years, and that's just within EA Sports.

The plan is bold but seems to be within reach based on existing trends in sports video games, in addition to EA's strategy to launch several new offerings across different sports. 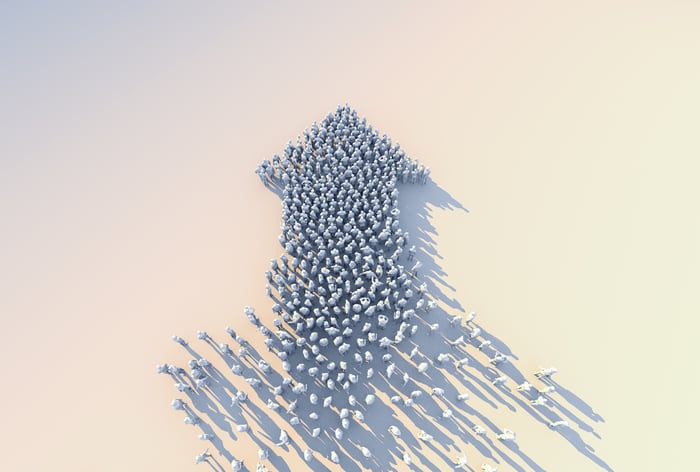 The company reported it had 230 million players and viewers across its EA Sports titles in the past year. Viewership is increasingly important, because the interest in esports competitions is producing more exposure for the EA Sports brand. For example, the 2021 Pro Bowl went virtual this year with NFL stars competing in EA's Madden NFL 21.

The pandemic accelerated the growth that was already happening at EA Sports. FIFA Ultimate Team set a record with six million daily active players in December, and Madden reached its highest player count in the history of the franchise, which dates to the early 1990s.

Even less popular sports titles like EA's NHL franchise saw growth last quarter with engagement in the game up 13%.

"Our fans are telling us that they want more of what EA Sports can deliver," Wilson said. "They're playing more of our games than ever before. They're spending more time with our content. And they're connecting with each other, the players, and teams and sports they love through our experiences."

To capitalize on the growing interest in sports gaming, EA is planning an aggressive expansion with its EA Sports lineup starting with its largest and most popular game, FIFA.

Soccer is the world's most popular sport, and there's no better way to capitalize on that interest than by releasing more experiences on the largest and fastest-growing gaming platforms, which are mobile devices. EA has already experienced great success with FIFA Mobile in Asia where the game has 21 million players. But there's more to come.

It just recently announced a new license extension with the Union of European Football Associations (UEFA), which is the governing body of European football. As part of this agreement, EA will launch multiple mobile offerings within the FIFA franchise, including a free-to-play PC version. The company believes these games could reach 80 million players in more than 15 countries.

The pending deals to acquire Glu Mobile (GLUU) and Codemasters (CDM) will assist EA in this broad expansion plan across EA Sports. Glu Mobile can help grow EA Sports franchises on mobile, given the success Glu Sports has had with its Tap Sports Baseball franchise.

And EA believes Codemasters, which owns top racing games like F1, DiRT, and Project Cars, will enable EA Sports to innovate and expand its global audience for racing entertainment.

Wilson said on the recent earnings call that this is just the beginning. EA is relaunching its college football franchise, which is currently under development. There's also an expansion in another sport, which Wilson wouldn't name, launching next fiscal year.

What is the financial opportunity?

EA estimates that the worldwide market for sports video games is over $11 billion with $7 billion on console and PC, while the market for mobile is $4.3 billion. For perspective, EA's total bookings are expected to reach $6.1 billion in fiscal 2021 (which ends in March), meaning the opportunity to gain more market share in sports is a major growth opportunity.

What's more, spending on sports is growing faster than other game types with mobile sports growing at a compound annual rate of 24% over the last four years.

EA's goal to reach 500 million players and viewers shouldn't be surprising. The market for interactive entertainment has been growing since day one. New technologies and ways to play games such as cloud-based subscription services and mobile platforms have only expanded the audience over the last decade and will continue to do so.

The company is currently firing on all cylinders with The Sims and Apex Legends also showing steady growth in bookings. The recent acquisitions and new games in the pipeline provide this industry leader with plenty of catalysts over the next few years.