Please ensure Javascript is enabled for purposes of website accessibility
Log In Help Join The Motley Fool
Free Article Join Over 1 Million Premium Members And Get More In-Depth Stock Guidance and Research
By Jason Hawthorne - Feb 15, 2021 at 6:30AM

The choice isn't easy, but simplicity may be the answer.

For some small biotechs, the race to develop a COVID-19 vaccine represented an opportunity to secure funding and establish partnerships that could serve as lifelines long after the pandemic. Two companies who have been eager to take advantage are Inovio Pharmaceuticals (INO -2.26%) and Vaxart (VXRT 3.09%). Despite limited progress and lingering legal issues, shares in both companies are dramatically higher than when the virus emerged just over a year ago. For investors willing to take the risk, there are a few comparisons that can help determine which is the better stock to buy now. 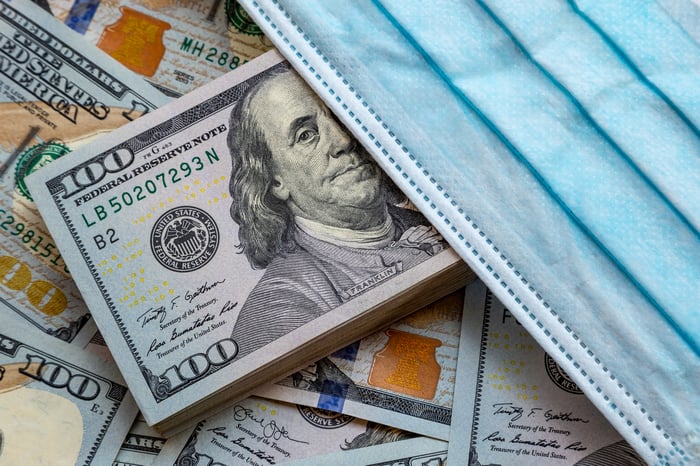 In June, Vaxart reported encouraging data in early animal studies. Its vaccine candidate, which is administered in the form of an oral tablet, had produced antibodies in mice and reduced weight loss and swollen lungs in infected hamsters. Not much new information was available until the company's vaccine candidate recently passed its safety-focused phase 1 trial without any serious adverse events. Unfortunately for shareholders, the data did not indicate protective antibodies were generated. The stock promptly fell almost 60%.

Inovio also published early results from animal testing in June. The company touted its vaccine candidate's protection in mice and lack of serious adverse safety events in its own phase 1 human trials. That was just a week after securing $71 million from the Department of Defense to scale production of its Cellectra devices, the company's handheld gadgets that deliver its gene-based medicine via an electric pulse. Data from that phase 1 study weren't released for six months. By the time it was made public, the stock had fallen 70% from the June peak.

Neither company seems ready to deliver a viable vaccine for COVID-19 anytime soon. While Inovio entered phase 2 before Thanksgiving and hopes to move to phase 3 early this year, Vaxart is only now entering phase 2, where the company will try and determine the most effective dosing regimen. Luckily for the pair, they are also developing treatments for other diseases.

Other programs in the pipeline

Both companies are conducting research to apply their respective drug delivery technologies to multiple diseases beyond COVID-19. Vaxart has done early stage work on norovirus, human papillomavirus (HPV), and a common cold virus that can be serious in infants. However, its primary focus is on the seasonal flu. Its monovalent flu vaccine, targeting only the H1 strain, performed slightly better than the leading flu vaccine in a phase 2 trial. The study was supported by $15.7 million from the Office of Biomedical Advanced Research and Development Authority (BARDA). The company parlayed that success into a partnership with Johnson & Johnson unit Janssen to develop a universal flu vaccine. Although it could be years until the pill is available, it might dominate the market for the roughly 49% of Americans who currently get the flu vaccine each year. In fact, the ease of taking a pill would likely increase that percentage significantly.

Inovio has many more disease targets in its portfolio of drugs, including several types of cancer. Across the many programs, most of its partnerships are with nonprofits, although the company does have an HPV program with AstraZeneca and one to target a rare form of brain cancer with Regeneron. Unlike Vaxart's single program beyond phase 1, most of Inovio's programs are in phase 2, with a drug targeting HPV currently in phase 3 trials. Management expects a readout for that study in the first half of this year.

Trustworthiness of the management team

Vaxart announced it was part of the U.S. government's Operation Warp Speed (OWS) program on June 26. Less than a month later, the stock was up 570%. Despite implying otherwise, the company was not selected to receive funding as part of the OWS program. It was merely invited to participate in preliminary studies on animals.

One stakeholder took advantage of the confusion. Less than three weeks earlier, Armistice Capital, a hedge fund that owned 29% of the company, had amended an agreement allowing it to buy shares for pennies. When the stock spiked, they simultaneously bought the shares on the cheap and sold them, pocketing $200 million and essentially exiting their ownership stake. Due to the actions and timing, Vaxart is the subject of an investigation by both the Department of Justice and the Securities and Exchange Commission.

Inovio has its own history of confusing announcements that have propelled the stock higher. CEO Dr. Joseph Kim claimed in a February television interview, and into March, that the company had developed a COVID-19 vaccine in only three hours. After criticism, the company clarified that it had only developed a construct for the vaccine. A slew of shareholder lawsuits followed.

Not one to shy away from promotion, Dr. Kim called his company "the leader in coronavirus vaccine development in the world" in a March White House meeting between President Trump and pharmaceutical executives. By June 23, when Inovio secured its funding to make more of its electronic drug delivery devices, the stock was already up 500% for the year. A week later, the company would announce it was part of OWS and shares continued to rise, at one point registering a 1000% gain during 2020. OWS had already announced its finalists for vaccine development earlier in the month, and Inovio was not listed among them.

If you have to choose one

Neither company offers a predictable future or a clear path to a COVID-19 vaccine. Although Inovio has many more drug candidates further along the clinical trial process, and expects a big phase 3 readout this year, delivery of those drugs requires a complex electronic device. It's hard to see broad adoption of this technology without a particularly unique drug or disease cure. The SARS-CoV-2 virus offered that opportunity, but the window seems to have (at least partially) closed.

Vaxart, on the other hand, is focused on one of the most prevalent diseases that exists, one that causes up to five million severe illnesses per year. Combine the fact that about half of Americans already get a flu vaccine each year with perhaps the easiest drug delivery mechanism ever invented and the ingredients exist for massive uptake. For the long term potential and gargantuan market opportunity, Vaxart may offer the better potential reward for those willing to take considerable risk and wait years for the small biotech to prove itself.