Please ensure Javascript is enabled for purposes of website accessibility
Log In Help Join The Motley Fool
Free Article Join Over 1 Million Premium Members And Get More In-Depth Stock Guidance and Research
By Dan Caplinger - Feb 15, 2021 at 4:05AM

There's a lesson everyone can take from the legendary investor.

Few investors have been around as long as 90-year-old investing legend Warren Buffett. The person many call the Oracle of Omaha remains as CEO of Berkshire Hathaway (BRK.A 3.75%) (BRK.B 4.02%), a company he first started doing business with more than half a century ago. Buffett's lifelong track record has put the power of time to full advantage, and his accomplishments will be hard for anyone to surpass.

Yet Buffett has admittedly gotten a lot of things wrong over the past year. In particular, three missteps have cost him and Berkshire shareholders significant amounts of money. However, there's one thing that Buffett has done that's consistent with his investing strategy -- and it has served to make up for his miscues. 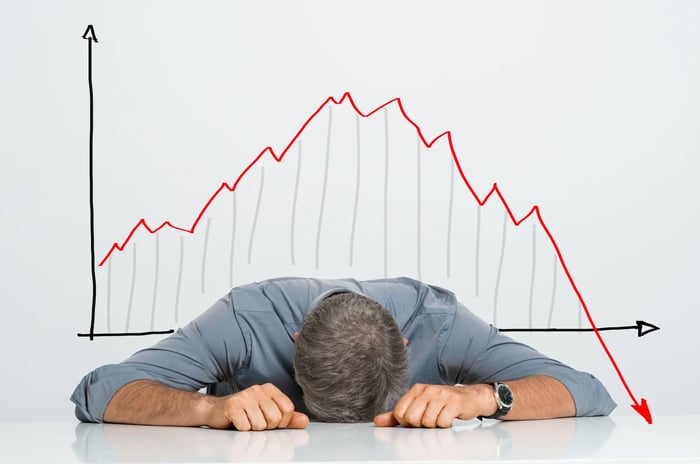 Many of us have learned the hard way that it's never a good idea to sell stocks after a huge crash. Emotions have us on edge, and the prospect of huge losses can impair anyone's judgment.

Yet that's exactly what Buffett did with Berkshire's airline holdings, selling Delta Air Lines (DAL 5.55%), American Airlines Group (AAL 7.09%), Southwest Airlines (LUV 4.98%), and United Airlines Holdings (UAL 7.54%) in early May 2020. At the time, they were down between 45% and 70% from where they had started the year, reeling from the impact of the COVID-19 pandemic.

Since then, however, the stocks have bounced back. They're all still below their levels at the end of 2019, but Southwest in particular has clawed back nearly all of its losses. 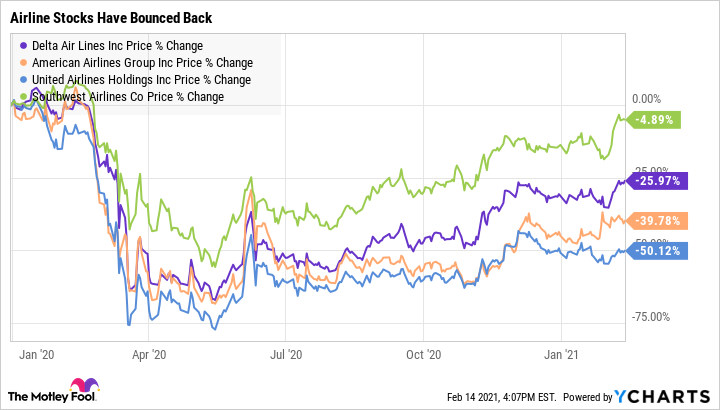 In Buffett's defense, selling a stock unemotionally can make sense if your thesis for investing in it has changed. That's what happened with Berkshire, as Buffett saw the fundamentals of the airline industry changing forever. Even after a huge infusion of government assistance, moreover, there's no guarantee that airlines will in fact outlast the impact of the pandemic without further financial suffering.

Buffett also reversed course with another trend he'd had in place for years. Suddenly, shares of several major banks played a much less prominent role in Berkshire's portfolio at mid-year in 2020. Specifically, Buffett sold out of Goldman Sachs (GS 5.79%) entirely, while slashing his stake in JPMorgan Chase (JPM 2.98%). It's unclear exactly when during the second quarter of 2020 those sales happened, but as of June 30, Goldman was down 14% for the year, and JPMorgan had fallen 33%.

Since then, both banks have completely made up for their losses. JPMorgan is up just a bit since the beginning of 2020, but Goldman has soared to hit new all-time highs. 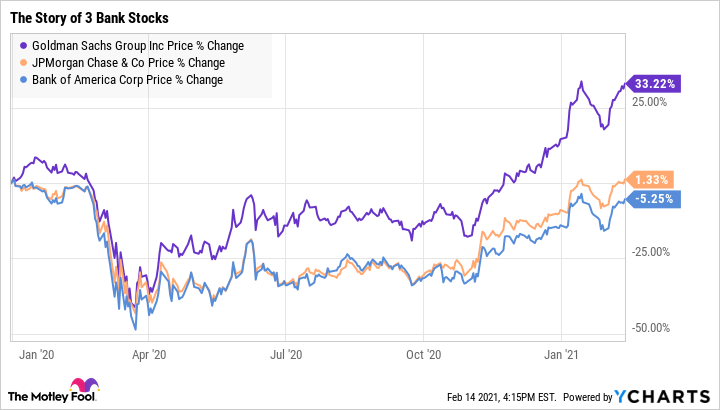 To be fair, Buffett has increased his position in Bank of America (BAC 0.72%), which has seen a similar trajectory. However, B of A has underperformed both Goldman and JPMorgan in the past 13 months.

Lastly, Buffett missed a big opportunity to buy shares of Berkshire Hathaway on the cheap. He made only minimal repurchases during the first quarter of 2020, when share prices fell as low as $160. Yet in the second and third quarters, he spent billions on buybacks -- and paid $215 to $220 per share on a big chunk of purchases in September.

Buffett explained that buying back stock when the insurance implications of the coronavirus crisis were uncertain would've been imprudent. When that potential source of liability became less troublesome, the Berkshire CEO felt more comfortable with repurchases. Nevertheless, with so much cash available, Berkshire could've made a bigger impact by pulling the trigger at the optimal time.

Why it didn't matter in the end

As it turns out, though, all of Buffett's mistakes were made up for by a simple decision. Berkshire held onto most of its Apple (AAPL 2.45%) stock, and that proved to be a huge moneymaker.

At the beginning of 2020, Berkshire owned just over 1 billion shares of Apple. The value at that time: about $72 billion.

Buffett did trim some of Berkshire's Apple holdings. Yet as of the most recent report, the insurance company still held 944 million shares of the tech giant's stock. With Apple's stock price having soared from $72 to $135 over that span, Buffett's remaining holdings amount to more than $127 billion in Apple stock. That's $55 billion in capital appreciation -- far more than the entire value he had invested in airline stocks.

As a result of a simple investing philosophy, Buffett has managed to hold his own even though he's made some big mistakes recently. Buying great stocks and holding them for the long run can pay off big, and it can also make up for a multitude of missteps along the way.