Please ensure Javascript is enabled for purposes of website accessibility
Log In Help Join The Motley Fool
Free Article Join Over 1 Million Premium Members And Get More In-Depth Stock Guidance and Research
By Royston Yang - Updated Feb 16, 2021 at 11:25AM

Look no further when it comes to restaurant stocks -- these three businesses have proven themselves during this crisis.

The pandemic has not been kind to businesses with brick-and-mortar outlets. As infection rates spiked across the world last year, governments began hastily shutting borders and locking down their economies. Industries such as aviation, hospitality, and tourism were badly hit as demand plunged almost overnight. Retail and food and beverage chains were not spared either, having been forced to temporarily shut the bulk of their physical locations as the virus swept across the globe.

However, some restaurant chains have swiftly pivoted their operations to capture digital sales, while others have modified their stores to adapt to a new normal. Such decisive actions have resulted in these businesses experiencing continued growth despite the tough challenges posed by the pandemic, and are a testament to management's resolve to evolve the business to cope with new rules regarding social distancing and movement restrictions.

Here are three restaurant stocks that have done well during this crisis and should continue to do so long after the pandemic has passed. 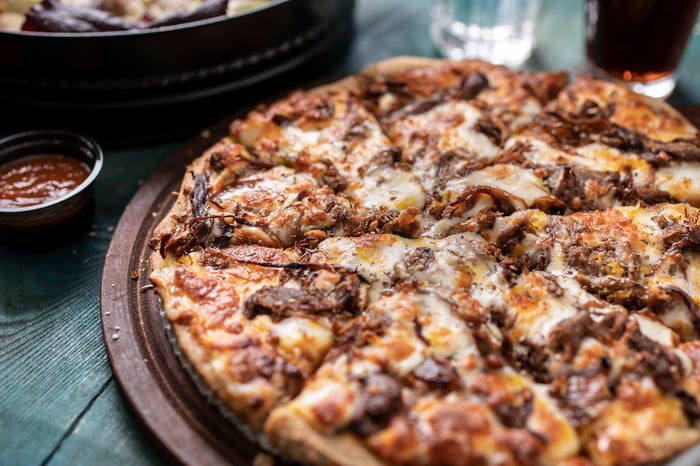 Domino's Pizza (DPZ 2.90%) is the No. 1 pizza company in the world in global retail sales. The company boasted a store count of around 17,250 as of January and was present in more than 90 markets globally. With much of the population working and studying from home because of government shutdown orders, the pizza chain has naturally benefited from higher demand, thanks in no small part to its delivery model.

Total revenue for the first nine months of 2020 rose nearly 12% year over year to $2.8 billion, while net income jumped by 25% to $339.4 million. That's a big leap from 2019, when revenue for the first nine months grew 5% and net income rose 8.4%. The improvement clearly shows the acceleration in growth caused by the pandemic. What's even more impressive is that the company has chalked up 38 consecutive quarters of same-store sales growth in the U.S. and a stunning 107 consecutive quarters of growth for its international same-store sales.

Domino's has continued to open stores during the third quarter, with 44 net new stores opening in the U.S. and 39 opening internationally. The company believes it has significant potential for new store openings in both developed and emerging markets. Current total store count in its top 15 markets is around 8,500, with room for around 5,100 more incremental store additions in the future.

Chipotle Mexican Grill (CMG 4.59%) operates a chain of restaurants in the U.S., Canada, and Europe serving Mexican-inspired food free from artificial flavors or preservatives. The company has successfully tapped on its digital platform to continue serving customers throughout the pandemic. For its full-year 2020 earnings, digital sales grew 174.1% year over year and made up 46.2% of total sales, a significant chunk considering digital sales only made up 18% of total revenue in 2019. Total revenue rose 7% year over year to $6 billion while comparable restaurant sales was a positive 1.8% for the year, demonstrating Chipotle's resilience despite the tough conditions.

Net income for the fourth quarter more than doubled to $191 million while full-year 2020 net income inched up 1.6% year over year to $355.8 million. The strong performance was driven by Chipotle's new "Chipotlane" concept, which allows drive-thru digital order pick-ups, providing convenience and peace of mind to customers who are worried about mingling in large crowds. As of year-end, there were a total of 170 Chipotlanes in use.

The company has also witnessed a surge in delivery revenue. For the quarter ended Sept. 30, delivery service revenue jumped more than threefold year over year from $6.4 million to $20.1 million. Chipotle is not content to rest on its laurels, though. It says it intends to hire a whopping 15,000 more employees as it plans to continue with its expansion, with 200 new restaurant openings slated for this year alone.

Wingstop (WING 3.38%) is the largest restaurant chain in the world that is focused on chicken wings, with more than 1,400 worldwide locations. Like Domino's, the vast majority of its restaurants are owned and operated by independent franchisees -- about 98%, in Wingstop's case. Although COVID-19 led to temporary restaurant closures and a reduction in seating capacity at Wingstop's restaurants, the company has successfully pivoted its business to carry out and delivery to make up for the slack.

Wingstop is expected to report fourth-quarter earnings on Wednesday morning, but the first three quarters of the year offered a lot to like. Over the first nine months of 2020. Wingstop enjoyed a 26.6% year-over-year jump in revenue to $185.5 million. Net income soared by 70.5% year over year to $29.7 million. Prior to the pandemic, the restaurant chain's digital sales mix was just over 40%, but this has now grown to 62% in its latest quarter. Domestic comparable-store sales growth was also strong, increasing by 25.4% year over year. Wingstop continued to generate healthy levels of free cash flow, up significantly from $7.5 million in the first nine months to $43 million. The company is feeling so confident of its future that it declared a special dividend of $5 per share.

Investors have reason to feel confident about these three restaurant chains' prospects, as each of them has a competitive edge that enables it to grow steadily over the long term.