Please ensure Javascript is enabled for purposes of website accessibility
Log In Help Join The Motley Fool
Free Article Join Over 1 Million Premium Members And Get More In-Depth Stock Guidance and Research
By Rich Duprey - Feb 16, 2021 at 8:55AM

With some of the most recognizable chains in North America, it ought to be doing better than it is.

Restaurant Brands International (QSR 0.61%) ought to be doing better. As the owner of Burger King, Popeyes Louisiana Kitchen, and Tim Hortons, the quick-serve chain operator should be outperforming its rivals, but over the last 12 months, its stock trails the returns of McDonald's (MCD 1.75%), Wendy's, and Yum! Brands, often by a good margin.

What is it that is holding the restaurant operator back while its competitors, if not excelling, are at least performing appreciably better?

The biggest drag has been the Tim Hortons chain, which hasn't posted a single quarter of same-store sales growth since the second quarter of 2019. The coffee shop generates 18% of Restaurant Brands' global systemwide sales, but 44% of its adjusted earnings before interest, taxes, depreciation, and amortization (EBITDA).

Part of the problem is that where Tim Hortons used to be synonymous with coffee in Canada, it now routinely places behind other chains, including McDonald's, Starbucks, and local chains like Second Cup.

An uninspired and often confused menu is another reason it's no longer the coffee shop to hang out at. In 2019, Tim's, as it's called, introduced 60 limited-time offers, including a Beyond Meat plant-based burger that it quickly yanked two months later. Restaurant Brands is still fiddling with the menu, introducing its roast beef and chicken Craveables and Dream Donuts, and changing its dark-roast coffee blend.

While the new products are now mostly targeted to Tim's core categories, constantly changing the menu also creates havoc in the kitchen.

Restaurant Brands has done better at Popeyes, where its chicken sandwich has been a massive success since its launch. Even during the pandemic, customers were lining up out the doors for the sandwich (of course, some of that was due to social-distancing requirements).

Last quarter was the first time since the chicken sandwich launched that Popeyes saw a comps decline. That had more to do with going up against incredible year-ago comps of 42% gains that were nearly impossible to supersede. The fact that comps were down less than 6% speaks to the continued popularity of the sandwich as systemwide sales were down just 1.5%. For the year, comps were up 17.7% following an 18.5% gain in 2019.

The acclaim Popeyes achieved with the chicken sandwich launched an all-new chicken sandwich war, with virtually every rival introducing their own version trying to catch some of the lightning Popeyes generated. McDonald's is launching three chicken sandwiches, and even leader Chick-fil-A was caught unaware.

In so doing, Popeyes is Restaurant Brands' fastest growing chain, in terms of revenue and restaurant count, though it's still generating less than 12% of total adjusted EBITDA.

Ready for a better burger

That leaves Burger King, which really ought to be performing better against McDonald's and Wendy's, but really isn't.

McDonald's, for instance, saw its morning daypart crippled by the pandemic, and though all restaurants took a body blow from the outbreak, breakfast accounts for 25% of the Golden Arches' sales and 40% of its profits.

Even so, McDonald's stock is down just 1.6% over the last 12 months while Restaurant Brands is down over 11%. The latter is carrying the burden of Tim Hortons, but it's more than elevated by Popeyes, meaning Burger King hasn't really done enough to add to the mix and is weighing on the restaurant operator's shares. 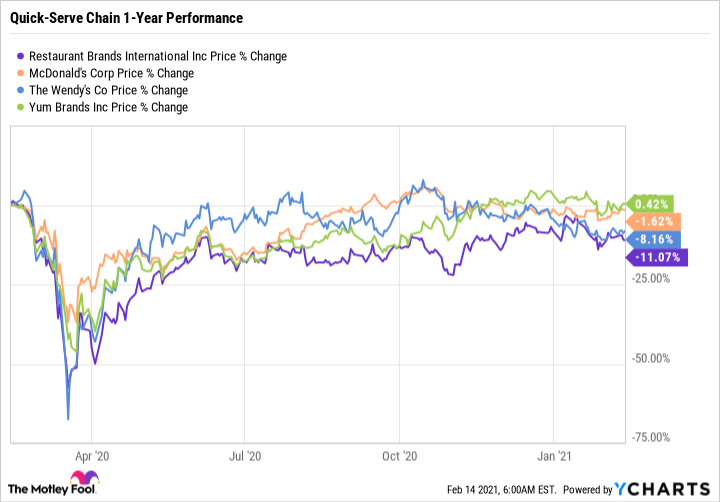 Part of the remedy is to enhance Burger King's digital channel. The chain is launching a new loyalty program called Royal Perks where customers can earn "crowns" for purchases they make.

McDonald's loyalty app has been a key ingredient in its ability to overcome the hurdles of the pandemic, and because its drive-thru window has always been an integral part of its business, with 70% of its sales coming through that channel. But it's been its other digital investments, including menus, that have helped it maintain sales.

Burger King is now investing heavily in new digital offerings, too, including new menu boards. While the loyalty program is being tested only in certain markets right now, the company intends for the offer to go national by the end of the year.

Restaurant Brands International does have the keys to better growth, but it is still fumbling with the keychain to unlock the opportunity right now to get customers to return.

While there is a bright future for the quick-serve restaurant chain, it may be awhile yet before it's able to fully take on its peers.