Please ensure Javascript is enabled for purposes of website accessibility
Log In Help Join The Motley Fool
Free Article Join Over 1 Million Premium Members And Get More In-Depth Stock Guidance and Research
By Rick Munarriz - Feb 17, 2021 at 10:55AM

Hong Kong Disneyland has closed down three times in the pandemic. It will give it another go on Friday.

Disneyland is finally going to reopen later this week, but unfortunately for fans in California we're not talking about Walt Disney's (DIS 3.69%) original theme park. It's Hong Kong Disneyland that will be unlocking its turnstiles for visitors again on Friday.

Right now just half of Disney's six theme park resorts currently have their gated attractions available to guests. Hong Kong Disneyland will join parks in Tokyo and Beijing as well as Florida's Disney World as open. Disneyland Paris is hoping to get back to business on April 2, but we've seen that restart date get bumped before. The original Disneyland in Anaheim has been shuttered for more than 11 months now, with no indication as to when it will fully reopen, though it will expand its indoor shopping and outdoor dining opportunities next month.

Hong Kong Disneyland fans know the drill. The park closed three times last year in response to rising COVID-19 cases. There's no assurance that things will stick this time. The pandemic has been a cruel and finicky beast. 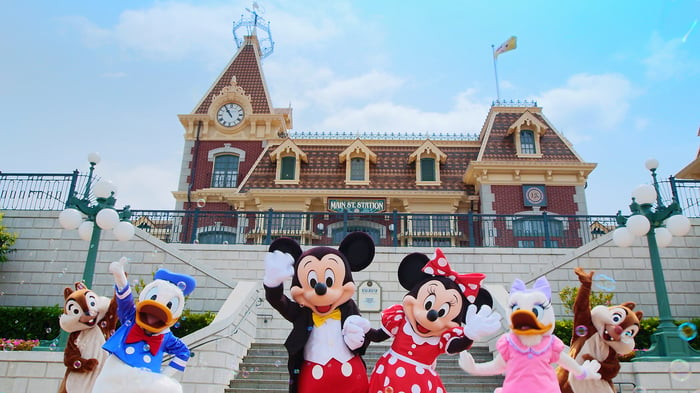 Theme parks used to be the steadiest of segments for Disney before the pandemic. Box office receipts will have their ups and downs. Network ad revenue can swing from one season to the next. Disney's parks have historically been resilient outside of pronounced global economic downturns.

Fiscal 2020 and now fiscal 2021 have been different for the House of Mouse. Disney's parks, experiences, and products segment clocked in with a modest operating loss on a sharp 53% plunge in revenue for its latest fiscal quarter.

Disney investors aren't feeling the sting. The shares have been hitting new highs on the strength of Disney+ and the success of other direct-to-consumer initiatives. It will take a lot of time before theme parks are contributing to the top and bottom lines the way they used to. Opening a resort is just half the battle. Travel restrictions and pandemic fears are keeping visitors away from the parks that have already opened. Florida's Disney World, for example, is limiting its guest counts to 35% of each park's capacity.

The climate should get kinder as 2021 runs its course. Case counts have fallen sharply worldwide since early January. Vaccination rates are improving.

The near term will continue to be challenging. Hong Kong Disneyland may be opening again later this week, but the visitors will be largely local. Even if you're able to jump through all the travel restriction hoops to get to Hong Kong, would you be confident booking a vacation a month or two from now for a park that has had to close down three times since early last year?

You don't want to be against the media stock giant or its theme parks business for the long haul, but we probably haven't seen the last of the hiccups. As the iconic boat ride will tell you -- over and over -- it's a small, small world.