Please ensure Javascript is enabled for purposes of website accessibility
Log In Help Join The Motley Fool
Free Article Join Over 1 Million Premium Members And Get More In-Depth Stock Guidance and Research
By Rich Duprey - Feb 17, 2021 at 10:30AM

The company will retain its premium water brands, though.

Nestle (NSRGY 0.24%) announced on Tuesday that it is selling its North American water business to One Rock Capital Partners and Metropoulos & Co. for $4.3 billion.

Brands being shed in the sale include Poland Spring, Deer Park, Ozarka, and Pure Life, along with four others. The deal also includes the ReadyRefresh beverage delivery service.

But Nestle will keep its premium water business, which comprises Perrier, San Pellegrino, and Acqua Panna. 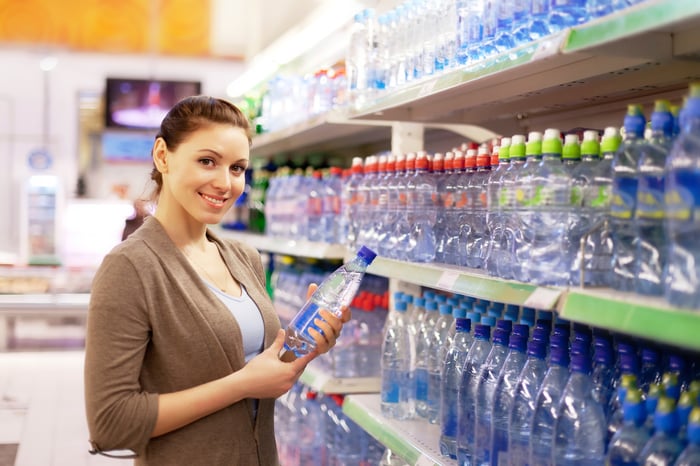 The consumer packaged-goods giant announced last summer it was embarking on a strategic review of its water business while recommitting to the global premium-water portfolio.

The North American water segment generated $3.6 billion in revenue in 2019 while the premium water unit brought in approximately $8.3 billion.

The consumer brands company has been retreating from the North American market for some time, exiting its direct-store delivery network for pizza and ice cream in 2019, as well as selling its U.S. ice cream business for $4 billion. Previously, it sold its Buitoni pasta business in North America to a private equity firm.

Water has been a controversial topic for Nestle after comments by former CEO Peter Brabeck-Letmathe were taken out of context to make it appear that he said water "is not a human right." Brabeck-Letmathe was merely equating water to how we value other foodstuffs.

While water was an important growth market for Nestle as soda consumption declined, bottled water's growth has slowed in recent years.