The testing will also be extended to children.

With their BNT162b2 coronavirus vaccine now being distributed in major markets to inoculate the general public, Pfizer (PFE -1.83%) and BioNTech (BNTX -1.72%) have moved to test it on a new group of patients. The two companies announced on Thursday that they have started a global phase 2/3 clinical trial to test the efficacy of the vaccine in pregnant women age 18 and older.

For the placebo-controlled study, Pfizer and BioNTech aim to recruit around 4,000 healthy pregnant women, to be vaccinated between 24 to 34 weeks into their terms. As is standard with BNT162b2, each will receive two doses of the vaccine; these will be spaced 21 days apart. Mothers will be monitored, as will their offspring from birth until roughly six months of age. 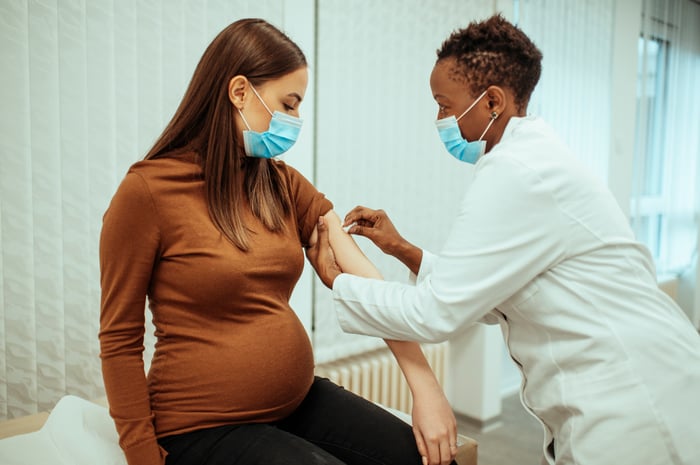 "Now that we are seeing successful initial implementation of vaccine campaigns with BNT162b2 across the globe, it is time to take the next step and extend our clinical program to other vulnerable populations, such as pregnant women, to potentially protect both them and future generations," Pfizer and BioNTech quoted the latter's chief medical officer, Ozlem Tureci, as saying.

The two companies added that, in the coming months, they plan to begin additional clinical studies in children age 5 to 11. They will also launch testing on children under 5 later this year. At the moment, they are evaluating the vaccine's effect on those between the ages of 12 and 15, in a global phase 3 trial.

In the U.S., BNT162b2 is one of only two vaccines (along with Moderna's mRNA-1273) that have received Emergency Use Authorization from the Food and Drug Administration.

On Thursday, both Pfizer and BioNTech shares fell more steeply than the 0.4% decline of the S&P 500 index, with the former stock slumping nearly 1%, and the latter dropping 0.8%.