Please ensure Javascript is enabled for purposes of website accessibility
Log In Help Join The Motley Fool
Free Article Join Over 1 Million Premium Members And Get More In-Depth Stock Guidance and Research
By Dave Kovaleski - Feb 20, 2021 at 6:38AM

USA Technologies and Republic First are two stocks that should be on your radar.

Coming out of a recession is typically a good time to look for stocks. You can find good values in companies that have been beaten down due to macroeconomic or other forces, but you can also find great growth stocks of small companies that are poised to break out in an improving economy.

Here are two stocks available in the $10 neighborhood or less that look like good buys. One is USA Technologies (USAT 1.25%), which provides the cashless technology for vending machines, and the other is Republic First Bancorp (FRBK 3.15%).

USA Technologies' devices allow people to use their credit cards at vending machines. If you've ever bought a soda or a candy bar at a vending machine, chances are you've used USA's ePort technology to swipe your card. While the service is familiar, the stock may not be to many investors, as it was delisted from the Nasdaq in September 2019 for failure to comply with reporting requirements. There was a revolving door of CEOs over the past couple of years as the company dealt with issues related to financial reporting and internal controls. 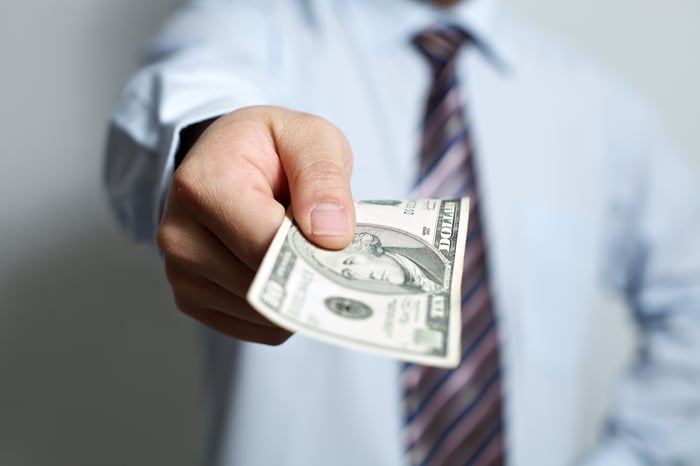 But things have stabilized, and the company looks like it is in a good position to grow today. In May 2020, USA Technologies hired a new CEO, Sean Feeney, who joined from DefenseStorm, a cybersecurity management provider. In November, the company got relisted on Nasdaq for clearing up its reporting issues, and it also announced that it was rebranding as Cantaloupe this year. Then, in December, it hired Ravi Venkatesan as chief technology officer, a new position at the company.

The company makes money in two ways -- from selling and upgrading ePort equipment, and through transaction and license fees from customers when the ports are used. The latter makes up the bulk of revenue, about $33.2 million of the $38.3 million generated in the quarter that ended Dec. 31. Year over year, revenue was hurt by the recession as people were locked down and fewer people traveled, but the numbers have improved steadily since the start of the pandemic.

USA Technologies reported a net loss in the quarter of $2.9 million, but that's down from a net loss of $8.4 million the previous year. The difference is a 28% decrease in expenses year over year.

The company has come through some management difficulties, but its technology is considered best-in-class and the new CEO is committed to investing in the technology, bringing on a CTO for the first time. It's a good, largely recession-proof niche industry with recurring revenue streams that is poised to grow over the next 10 years, according to several different studies -- particularly contactless payment vending machines.

This is a company that had been producing consistent quarterly revenue gains for years until the most recent accounting problems, and with the new leadership and focus, along with the expected growth in the space, it looks like a good long-term buy.

Republic First, a regional bank looking to bounce back

Republic First Bancorp is the holding company for Republic Bank, a regional bank based in Philadelphia with branches in New Jersey, Pennsylvania, and New York City. In a time when many small regional banks are struggling, Republic First has performed well. The stock is up 21% year to date and trading for $3.45 per share at Friday's prices.

The bank prides itself on its customer service, as it was recently honored by Forbes as the No. 1 bank in its class in customer service. It has even put this into its marketing materials. That comes from the bank's chairman, Vernon Hill, who founded Commerce Bank in 1973 (and London's Metro Bank in 2010) and still owns more than 7% of Republic First's shares. Dating back to his days at Commerce Bank, Hill championed the idea of making stores (as he calls them, instead of offices or banks) customer-centric and more inviting, like going to a retail shore. The Republic First "stores" just look different, all glass-enclosed cubes in an open setting. Hill literally wrote the book on having fans, not customers -- see his book, Fans Not Customers: How to Create Growth Companies in a No Growth World -- and he carries that attitude to Republic First.

The bank has doubled its assets from $2.3 billion to $5 billion at the end of 2020, doubling the number of its stores from 12 five years ago to 30 now. But that growth came at a price as expenses spiked in relation to earnings. Republic First embarked on a cost-cutting initiative last year that involved reducing the number of store opening, executive compensation cuts, and reduced hiring. As a result, expense growth slowed in 2020 and that is expected to continue this year. With another round of PPP coming and the organic growth in loans and deposits it saw in 2020, Republic First is heading in the right direction and, with its low current valuation, should improve its efficiency and start to move up.

Iʻm more bullish on USA Technologies (soon to be Cantaloupe), but Republic First could be one to watch for patient investors.