Please ensure Javascript is enabled for purposes of website accessibility
Log In Help Join The Motley Fool
Free Article Join Over 1 Million Premium Members And Get More In-Depth Stock Guidance and Research
By Alexander Carchidi - Feb 21, 2021 at 5:50AM

They're slowly becoming the rock-solid businesses he favors.

Cannabis companies seem like they're the opposite of what the famed investor Warren Buffett would like. They're typically unprofitable, have few products that competitors can't replicate, and they're often debt-laden. Plus, they spend a lot on the equipment and staff needed to cultivate marijuana, and few have a competitive moat big enough to protect their margins. And, as though all that weren't enough, their stocks tend to be highly unreliable investments with volatile prices.

But in the long run, it's inevitable that at least some cannabis companies will become prototypical buy-and-hold-until-the-end-of-time-style Buffett stocks. Despite the industry's present-day schlock, there are two contenders I think could eventually fit Mr. Buffett's exacting bill. While there's no guarantee that they'll ever actually make it to the Berkshire Hathaway portfolio, you shouldn't be too surprised if they do. 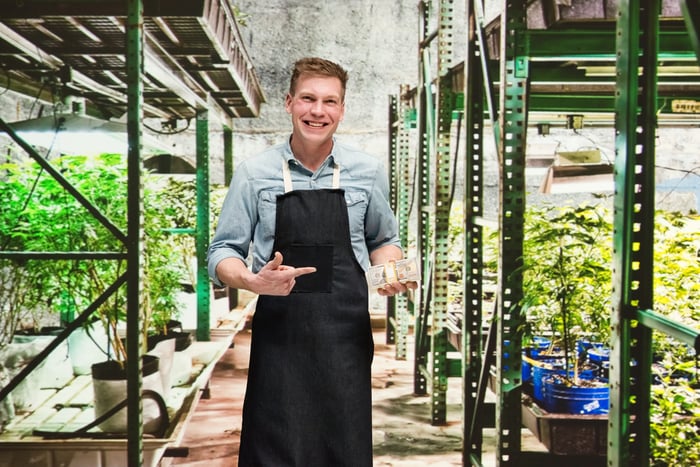 Canopy is already turning marijuana into a Buffett business

Imagine a cannabis company that operates like the major beer companies of today. It'd have strong brands that consumers would be loyal to (thereby building a moat against competitors), consistent earnings, highly predictable costs of goods sold (COGS) and capital expenditures, wide and efficient distribution, and minimal need to invest in research and development (R&D) to maintain its market share.

Though it isn't there just yet, Canopy Growth (CGC 4.72%) is well on its way toward this goal. Its Martha Stewart brand of cannabidiol (CBD) wellness products is a smash hit in the U.S., where it generates more revenue than a majority of other CBD brands despite launching mere months ago. Similarly, the company's collaboration with Constellation Brands is helping it to distribute its BioSteel sports beverages. As many as 70% of the sports teams in America's top four sports leagues (MLB, NBA, NFL, and NHL) purchase BioSteel products -- and will potentially purchase its cannabis goods in the future. BioSteel and Martha Stewart are too new to demonstrate that consumers are loyal to the brand, but the positive reaction thus far means they're off to a good start.

Financially, Canopy is definitely trending in the right direction to become a Buffett pick. Management says that as soon as fiscal year 2023, its capital expenditures will stabilize at around 5% of net revenue. And its selling, general, and administrative (SG&A) expenses fell by 15% in the most recent quarter compared to a year ago. Likewise, R&D expenses are down 33%. In two years, profitability should finally be within reach thanks to consistently rising margins. So, if you're interested in investing like the Oracle of Omaha, that's around the time that someone like Buffett would probably start to express interest. But, if you're more aggressive, the stock is favorable enough to invest in right now, too.

Does Aphria have what it takes?

Aphria (APHA) is charting a similar path as Canopy in terms of its brands. By mixing everything from cannabis beverages to craft beer and CBD wellness products with standard recreational marijuana fare, the company is casting a wide net and marshalling the distribution resources to profit accordingly. It's also in good shape financially, given that it reported positive adjusted earnings for the last six quarters. Its long-term debts are slowly falling, and will be almost entirely paid off over the next five years. And, after massive improvements over the course of 2020, positive free cash flow is finally within reach, so management will soon have more resources to direct to growth.

Then there's Aphria's upcoming merger with Tilray. After the two combine, they'll be able to drive cultivation costs down aggressively using Tilray's European facilities. Those facilities will enable the new entity to access the EU cannabis markets without incurring tariffs, cutting costs even further. Production aside, the deal will also result in cost synergies of approximately $78 million over two years after the merger closes, concentrated in marketing and sales.

Given his conservative nature, Buffett would probably wait and see how the new entity performs for a few quarters before investing. That's a good idea for other investors, too. In particular, keep an eye on the consistency of the company's earnings growth -- stable efficiency is perhaps the most important hallmark of Buffett's favorites.